A pediatric formulation of nifurtimox demonstrated superiority 1 year after treatment compared with placebo, according to results of a phase 3 clinical trial presented at a conference in Spain.

Two nitroheterocyclic compounds are currently used for treatment of Chagas disease: nifurtimox and benznidazole. However, the FDA has only approved benznidazole so far. Nifurtimox is available through the CDC in the form of a 120-mg tablet under an investigational protocol.

Jaime Altcheh, MD, PhD, head of the department of parasitology and Chagas disease at the Ricardo Gutierrez Children’s Hospital in Buenos Aires, Argentina, told Infectious Diseases in Children that in a 2011 study published in Pediatrics, adverse events were commonly experienced by children receiving benznidazole (41.4%).

CHICO, which stands for CHagas disease In Children treated with nifurtimOx, assessed the efficacy, safety and pharmacokinetics of a dissolvable tablet with two dosing strengths — 30 mg or 120 mg — in children aged 0 to 17 years (n = 330) with either acute or chronic Chagas disease. According to the release, the formulations were developed by Bayer to assist with accurate dosing and administration of the drug to patients who may have difficulty swallowing tablets. 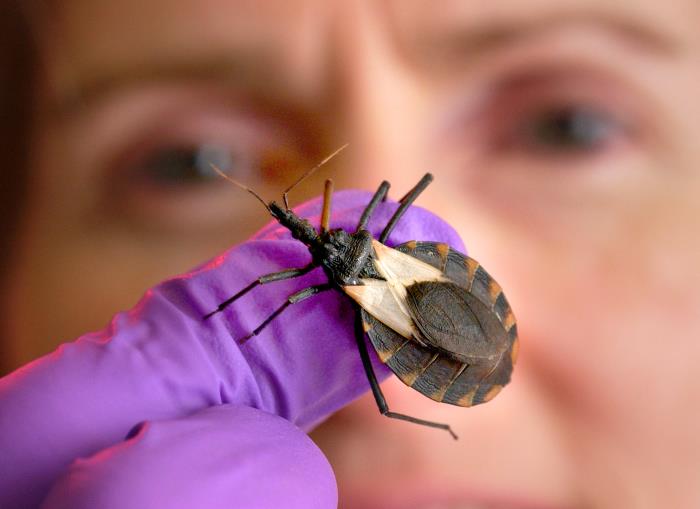 Chagas disease disease is caused by a parasite transmitted to humans through the feces of triatomines. WHO reports the majority of infections occur in Latin America, where more than 10,000 deaths occur every year as a result of the infectious disease.
Source: CDC

The study included 330 children who received treatment at 25 investigational sites throughout Argentina, Bolivia and Columbia between 2016 and 2018.

Researchers observed that children who were randomly assigned to 60 days of nifurtimox had a better serological response after 1 year compared with those who received placebo. For children aged younger than 2 years, a 30-day regimen and the 60-day regimen appeared to be equally efficacious. However, Altcheh said that more research is needed to confirm this finding.

Altcheh said only 27.6% of children who received nifurtimox experienced adverse events related to the drug’s use.

According to WHO, 6 to 7 million people worldwide — mostly in Latin America — are infected with the parasite that causes Chagas disease, Trypanosoma cruzi. Results of a randomized controlled trial published last year showed that the first novel treatment of Chagas disease in 3 decades, named E1224, was safe but lacked efficacy.

“With a formulation specifically designed for infants and young children who are not able to swallow tablets, dosing accuracy is improved and may contribute to lower the risk of overdose, especially in newborns,” Altcheh said. – by Katherine Bortz

Disclosures: Altcheh is a consultant for Bayer and currently acting as the coordinating investigator of the pediatric phase 3 clinical trial.

The development by Bayer of a 30-mg tablet, as well as the introduction of quickly dispersible formulations of both the 30-mg and 120-mg tablets, is an important advance, as this should improve dosing ease and accuracy. The study results also highlight the importance of identifying children, as well as women in their childbearing years, who will benefit from treatment of Chagas disease.