Measles cases in Europe tripled in 2018, WHO says

The agency said that while more European children than ever are being vaccinated against measles, “progress has been uneven between and within countries, leaving increasing clusters of susceptible individuals unprotected, and resulting in a record number of people affected by the virus in 2018.”

Researchers recently reported a 31% surge in measles cases worldwide, driven by gaps in vaccination coverage and large outbreaks in Venezuela and Europe. WHO urged European countries to target interventions in places and groups where immunization gaps persist.

According to a news release, measles killed 72 children and adults in Europe in 2018. There were 82,596 cases in 47 of 53 countries — the highest count this decade, WHO said. In the countries that reported hospitalization, nearly 61% of patients with measles were hospitalized.

Europe achieved its highest estimated coverage for the second dose of measles vaccination (90%) in 2017, WHO reported. It said more children in the region had received the full two-dose series on time, in accordance with their countries’ immunization schedules, than any year since the organization started collecting data on the second dose in 2000. Coverage with the first dose of vaccine was 95%, the highest level since 2013. 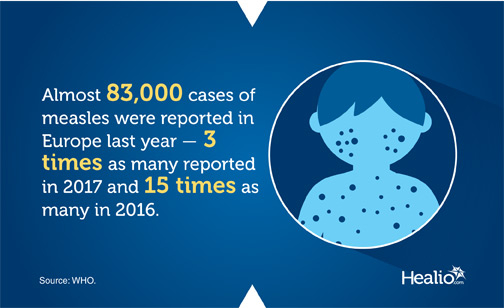 “The picture for 2018 makes it clear that the current pace of progress in raising immunization rates will be insufficient to stop measles circulation,” Zsuzsanna Jakab, PhD, WHO regional director for Europe, said in the release. “While data indicate exceptionally high immunization coverage at the regional level, they also reflect a record number affected and killed by the disease This means that gaps at the local level still offer an open door to the virus. We cannot achieve healthier populations globally, as promised in WHO’s vision for the coming 5 years, if we do not work locally.”

The European Vaccine Action Plan 2015-2020 includes a strategy endorsed by all 53 countries to eliminate measles and rubella. It says at least 95% of the people in every population need to be immune through two doses of vaccination or prior exposure to the virus.

According to WHO, estimated coverage with the second dose of measles vaccine was below the 95% threshold to prevent circulation or achieve “herd immunity” in 35 countries in the region in 2017.

There were 43 European countries that interrupted endemic measles transmission for at least 12 months at the end of 2017, and some countries also managed to limit the spread of the virus following the importation of few cases in 2107 and 2018, “showing that elimination of the disease is well within the reach for the whole region,” WHO said.

“Medical workers are the first line of defense in the fight against vaccine-preventable diseases,” Nedret Emiroglu, MD, PhD, director of WHO’s Division of Health Emergencies and Communicable Diseases for Europe, told Infectious Diseases in Children. “WHO encourages them to educate their patients about the benefits and rationale of immunization to ensure that all children are vaccinated on time according to their countries’ vaccination schedules, and that adults who did not benefit from vaccination when they were children are also protected.” – by Bruce Thiel

Disclosure: Emiroglu and Jakab are employed by WHO.