Nearly 25% of parents who drink alcohol during special occasions do not limit their consumption or consider how their drinking affects the care of their child the next day, according to nationally representative poll results published by C.S. Mott Children’s Hospital.

The poll highlighted how parenting while hungover can affect more than just the adults. Approximately 30% of parents reported that they knew an adult who drank alcohol at a special occasion who may have caused a potentially unsafe situation for their child.

“Parents should be encouraged to think broadly about their responsibility for supervising their child,” Sarah J. Clark, MPH, associate research scientist at the University of Michigan Medical School and co-director of the C.S. Mott Children’s Hospital National Poll on Children’s Health, told Infectious Diseases in Children. “Pediatricians should encourage parents in a nonjudgmental way to plan ahead to make sure their children are adequately supervised.”

She added that the point of the poll was not to discourage parents from celebrating with legal products during the holidays but to recognize that being inebriated can impair an adult’s parenting ability not only during an event but also the next day. 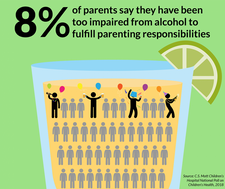 Of the 1,170 parents of children aged 0 to 9 years who responded to the poll, most parents said they were very likely to plan child care during the event (73%) and arrange for a designated driver (68%). However, parents who rarely drink were less likely to plan for special occasions than parents who sometimes or often drink alcohol.

Among those who said they knew of a parent who may have caused an unsafe situation for their child, most said the other adult was too intoxicated or hungover to care for their child (61%) or that they could not handle a possible emergency (48%). Some reported that they were concerned that an adult drove with the child while impaired (37%), were violent or uncontrollable in the child’s presence (28%) or caused an injury to the child (7%).

The researchers added that 8% of parents reported that they could care for their child because of alcohol consumption in at least one situation, and 54% said that this caused them to change the way they consume alcohol in the future. They also were more likely to plan for child care after these situations (46%). This was equally reported among mothers and fathers, so the researchers stressed that these risks should not be considered for only mothers or only fathers.

Clark expressed concern that one in 12 parents were too impaired to care for their children.

“If anything, I think that this number might be low,” she said. “That increases the risk for those kinds of everyday injuries and accidents that can turn into tragedies, things like choking, getting into household cleaners or pills in the medicine cabinet. Bad things can happen when the parent is impaired and not able to provide adequate supervision. I think we have to take that seriously as an injury risk factor.” – by Katherine Bortz