Pharmacotherapy keeps youths with opioid use disorder in care longer

Youths who received medication in a timely manner were less likely to discontinue treatment for opioid use disorder compared with youths who received behavioral health services only, according to recently published study results in JAMA Pediatrics. However, researchers said this “critical evidence-based intervention” is underused in younger patients.

“There is a wide treatment gap for youth with opioid use disorder,” Scott E. Hadland, MD, MPH, MS, assistant professor of pediatrics at Boston Medical Center and Boston University School of Medicine, told Infectious Diseases in Children. “We studied Medicaid-enrolled youth across 11 states between 2014 and 2015 and found that only one in four adolescents and young adults between the ages of 13 and 22 years received evidence-based medications after presenting to care and being diagnosed with opioid use disorder. This gap was enormous for adolescents younger than 18 years. Only about one in 21 received a medication. Most youth received only behavioral health services.”

Hadland and colleagues conducted a retrospective cohort study using data from 2,490,114 youths aged 13 to 22 years from 11 states who were enrolled in Medicaid between Jan. 1, 2014, and Dec. 31, 2015. There were 4,837 youths diagnosed with OUD (median age, 20 years; 56.9% female; 76% non-Hispanic white), including 3,654 youths (75.5%) who received any treatment within 3 months of OUD diagnosis. Behavioral health services only were offered to most of the youths (52%), whereas slightly less than a quarter received OUD medications. 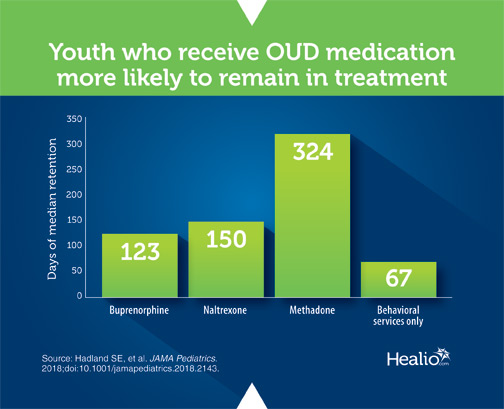 In the 728 adolescents aged younger than 18 years, only 34 (4.7%) received timely OUD medications. However, a much higher percentage (26.9%) of young adults aged 18 years and older received OUD mediations.

Youths who received OUD medications had longer median retention in care compared with youths who received only behavior health services. For example, those who received timely buprenorphine had a median retention in care of 123 days; naltrexone, 150 days; and methadone, 324 days; whereas youth who received behavioral services only were retained in care for a median of 67 days. Lower attrition from treatment also was independently associated with timely treatment with buprenorphine (adjusted HR = 0.58), naltrexone (aHR = 0.54) and methadone (aHR = 0.32) compared with receiving behavioral health services alone.