Addressing a pediatric health epidemic: Implications of the opioid crisis

The medical literature and lay news are replete with information about the “opioid crisis.” When assessing data on medical and nonmedical use of opioids (as described in the Sidebar) the term “crisis” seems to be appropriate. As with adults, medical and nonmedical opioid use in the pediatric population should include clarifying and encouraging appropriate and judicious use when prescribing; additionally, consideration must be given to the possibility of accidental exposure and poisoning in young children, as well as abuse among adolescents.

Opioids include natural (opiate) and synthetic (opioid) substances. Natural opiates, derived from the opium poppy plant, include morphine, codeine, opium, and heroin. Opioids (synthetically derived) include many prescription analgesic products, such as oxycodone, hydrocodone, methadone, hydromorphone, and fentanyl, among others. For the remainder of this column, “opioid” is used to connote opiate and opioid drugs and substances, as this term is commonly used.

The rate of prescribing opioid analgesic drugs has increased dramatically in recent years; an important reason for this increase relates to an enhanced emphasis on the identification and treatment of pain over the past 20 to 30 years, because it was believed that pain was inadequately evaluated and treated. Prescription opioid analgesic products can play an important role in pain treatment, and pharmaceutical manufacturers have responded by introducing and advertising opioid drug products in the commercial marketplace. Numerous studies have described the relationship between medical prescribing of opioid drugs and nonmedical use, indicating that the prescribing and provision of opioid analgesic products is a significant contributing factor in many nonmedical use scenarios.

Many data assessing prescription opioid analgesic use have been evaluated and published in the past few years. In a study published in the New England Journal of Medicine, Dart and colleagues evaluated trends in the diversion and abuse of prescription opioid drugs obtained from five large databases over a recent 12-year period and found that prescriptions for opioid analgesic products increased greatly over 9 years, and then declined slightly over the latter 3 years.

Other data have similarly identified some recent decline in opioid use, indicating that identification and an enhanced emphasis on the negative consequences of opioid drugs have been beneficial to some extent. Efforts have included educating health care professionals and the public on the dangers of prescription opioid drug use and abuse, implementation of prescription drug monitoring programs, federal and local interventions, and most recently, the introduction of opioid drug products with abuse-deterrent technologies (e.g., OxyContin). 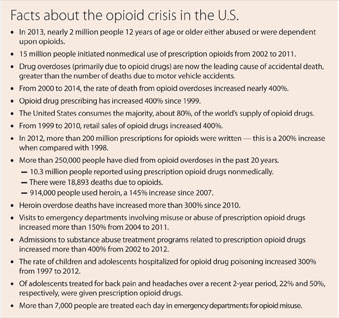 Pediatric implications of increased opioid use and exposure relate additionally to unintentional exposure of young children. Pediatric exposure and poisoning data obtained from the National Poison Data System were evaluated by Burghardt and colleagues over a 10-year period, from 2000 to 2009. Prescriptions for adults were significantly associated with exposures and poisonings in infants, children and adolescents, with the strongest association for medication categories demonstrated for opioids, and the highest risk for all medication categories occurring in young children (0-5 years age) and adolescents (13-19 years age). Serious injuries and hospitalizations occurred most frequently in the opioid and hypoglycemic medication categories.

In a separate study by Allen and colleagues, data from the National Poison Data System were evaluated for exposures to prescription opioid drug products among children and adolescents younger than 20 years of age, from 2000 to 2015. During this 16-year period, 188,468 prescription opioid exposures occurred, with hydrocodone accounting for the largest proportion of exposures (28.7%). Exposures to buprenorphine (90% occurring in children 5 years) increased during the last 3 study years, unlike other opioids. The rate of prescription opioid-related suspected suicides among adolescents increased by 52.7%.

In another study by Gaither and colleagues, the Kids’ Inpatient Database was used to identify 13,052 discharge records for children and adolescents aged 1 to 19 years hospitalized for opioid poisonings, from 1997 to 2012. During this 16-year period evaluated, the annual incidence of hospitalizations for opioids increased 165% overall, with increases of 205% and 176% for children aged 1 to 4 years and 15 to 19 years, respectively. Poisonings from heroin increased by 161% in adolescents aged 15 to 19 years.

Additional guidelines describing the appropriate use of opioids in the pediatric population are needed. It is incumbent upon pediatric health care providers to educate patients and parents about safe storage of all medicines, including opioids. One recently published survey of adults reporting prescription opioid use demonstrated that safe storage was reported by only 29% (McDonald, 2017). All surveyed adults had children living in the home.

The FDA provides useful information on the proper disposal of unused medicines, including a list of medicines that are best disposed of in a toilet. Most medicines can be safely disposed of in household trash by mixing the drug product with an unpalatable substance, such as used coffee grounds. Pediatric health care providers can contribute to the safe use of opioid drug products through judicious prescribing and patient/parent education.