A 9-year-old girl with petechial patches on her legs

A 9-year-old girl presented with a 5-month history of episodic nonblanching annular red-yellow patches on her legs. The lesions resolved spontaneously after several weeks, and were asymptomatic. The patient was otherwise healthy, had a well-rounded diet and had no other associated symptoms. Her family denied any recent upper respiratory tract infections, a personal or family history of bleeding disorders or easy bruising. 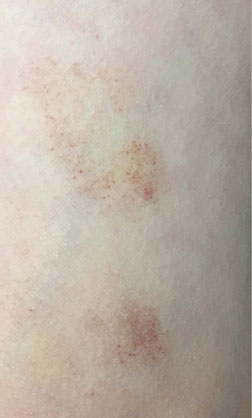 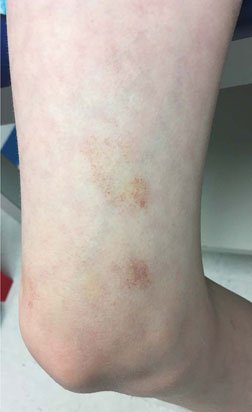 On exam, the patient had nonblanching annular pinpoint petechial macules coalescing into red-yellow patches resembling cayenne pepper on her thighs and lower legs. No other significant findings were noted on physical exam. Her primary care physician had performed a lab workup looking for common bleeding disorders, which was negative.

Pigmented purpuric eruptions (D) represent a group of skin conditions with various clinical presentations of lymphocytic capillaritis, including petechiae, purpura and red-brown-yellow patches. The lesions may be pruritic and tend to be located most commonly on the lower extremities. They rarely appear on the trunk or upper extremities. Pigmented purpuric eruptions (PPE) is composed of progressive pigmentary purpura (Schamberg’s disease), which is the most common manifestation of capillaritis, purpura annularis telangiectodes (Majocchi’s disease), pigmented purpuric lichenoid dermatosis of Gougerot and Blum, lichen aureus and eczematous purpura of Doucas and Kapetanakis.

In this case, the annular configuration of the petechial eruptions on the lower extremities is most consistent with purpura annularis telangiectodes or Majocchi’s disease. The suspected triggers of capillary fragility and dilation related to PPE include asymptomatic infections, medications and contact allergens. The rash may wax and wane for months to years, and can have a more chronic course – similar to that in adults.

The diagnosis is primarily clinical. A skin biopsy may be helpful if there is a suspicion for mycosis fungoides. A complete blood count and coagulation profiles are normal in PPE, whereas, histologically, skin biopsies show perivascular lymphocytic inflammation, hemosiderin deposition, patent and normal blood vessels and extravasated red blood cells in the papillary dermis. Different subtypes of PPE can have additional histological features. Although there is no consistently effective therapy, improvement has been reported with a variety of treatments including topical low-mid potency steroids, pentoxifylline, ascorbic acid (vitamin C), rutoside, griseofulvin, cyclosporine, psoralen and ultraviolet A therapy and narrowband ultraviolet B therapy.

Scurvy is caused by vitamin C deficiency, which leads to impaired collagen production, poor wound healing, capillary fragility and bone defects. Infants and children usually develop scurvy due to malnutrition, and they present with corkscrew hairs on the extremities and back, perifollicular hyperkeratotic papules and hemorrhages, joint pain, refusal to walk, gingival swelling and bleeding and irritability.

Idiopathic or immune thrombocytopenic purpura is an autoimmune disorder in which the patient has autoantibodies to platelets, leading to low platelet counts and bleeding resulting in ecchymoses, petechiae, purpura, bleeding gums, epistaxis, and in severe cases, intracranial hemorrhage, hematuria and gastrointestinal bleeding.

Leukocytoclastic vasculitis is a form of small vessel vasculitis that presents as palpable purpura on the lower extremities and less commonly the buttocks, upper extremities, and trunk. In more severe cases, the purpuric lesions can become vesicular, bullous and ulcerated. Although about half of the cases are idiopathic, the development of leukocytoclastic vasculitis is associated with medications, infections, malignancy, and inflammatory bowel disease.

PPE are rare in children and infants, and making the diagnosis can provide reassurance, given its overall benign nature in children, and prevent extensive workup.