A meta-analysis published in Clinical Infectious Diseases showed that ART initiation decreased the risk for opportunistic infections in children infected with HIV living in lower- or middle-income countries.

“Following ART initiation, the incidence for all [opportunistic infections (OIs)], except bacterial pneumonia, TB, candidiasis and [varicella zoster virus], declined to less than 2.5%,” Marie-Renée B-Lajoie, MD, MPH, of the department of family medicine at McGill University, and colleagues wrote. “The greatest effect of ART on incidence was for cerebral toxoplasmosis, Cryptosporidium diarrhea, and [extra-pulmonary tuberculosis].”

To evaluate the incidence of 14 OIs and the impact of ART among HIV-infected children in low- and middle-income countries, B-Lajoie and colleagues performed a systematic review and meta-analysis of studies published between 1990 and 2013. For 88 studies, comprising 55,679 children, the researchers calculated the incident risk and prevalent risk for each OI in ART-naive and ART-exposed children as well as unadjusted ORs for the overall impact of ART. Using the AIM model, the researchers estimated the number of OI cases and the total cost averted. 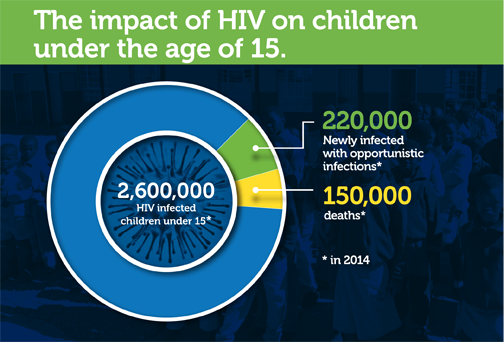 The researchers observed a significant reduction in incident risk for the majority of OIs after initiating ART. For both ART-naive and ART-exposed children, the researchers found that bacterial pneumonia was the most common incident infection, and TB was the most common prevalent infection. An increased incidence for varicella zoster and a small decrease in incidence for bacterial sepsis and pneumonia also were observed. In addition, the investigators estimated that ART initiation, based on WHO’s 2010 guidelines, averted more than 161,000 OIs in 2013, resulting in annual savings of at least $17.7 million. Ninety percent of these savings represented averted TB cases.

The 2015 WHO guidelines now recommend ART initiation in all children and adolescents, the researchers wrote.

“This is critical as scale-up of ART remains less successful in children,” B-Lajoie and colleagues wrote. “Strong mother-child prevention programs, expansion of access to early infant diagnosis, more robust procurement and supply management systems, including improved pediatric ART formulation, are also critical to reducing the adult-pediatric ART coverage gap, with an ultimate goal of eliminating the pediatric HIV burden.” – by Will Offit