Varicella, more commonly known as chickenpox, was previously thought of as a harmless rite of passage for all children. Before the development of an effective vaccine, some parents were known to throw “chickenpox parties.” By exposing their child to the disease at a young age, parents thought they were protecting the child from a more serious disease if they were to contract it as an adolescent or an adult. 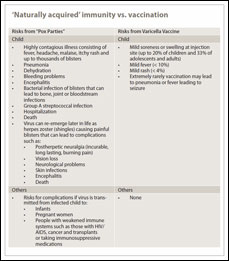 Antivaccine activists, among others, have recently spearheaded a resurgence in this practice, believing that purposefully exposing a child to a disease they believe to be harmless is safer and more effective than receiving the vaccine itself.

Chickenpox is caused by the varicella-zoster virus (VZV) and is a highly contagious disease. The virus spreads in the air through coughing or sneezing or by touching or breathing in virus particles from blisters. VZV can infect those who have never had the disease or received the vaccine. The disease progresses over 5 to 10 days beginning with high fever, malaise, headache and loss of appetite, leading to a rash that begins on the face, chest and back and spreads to the rest of the body. The rash turns into itchy, fluid-filled blisters that progress into scabs over about 1 week.

Although chickenpox is typically considered a relatively mild disease in children, serious complications can occur at any age. Prior to licensure of the varicella vaccine in 1995, chickenpox was very common with an estimated 4 million cases each year in the United States. During this time about 10,600 people were hospitalized, and 100 to 150 deaths occurred annually as a result of chickenpox. Serious complications include pneumonia, dehydration, bleeding problems and encephalitis. If blisters become infected, bone, joint or bloodstream infections can occur as well as group A streptococcal infections, which may be fatal. Those at risk for complications include infants, pregnant women and people with weakened immune systems, such as those with HIV/AIDS, cancer and transplants or those taking immunosuppressive medications.

Chickenpox is not the only illness caused by VZV. The virus can lie dormant in individuals who have already had chickenpox and re-emerge many years later to cause herpes zoster, also known as shingles. The painful rash associated with the disease occurs most commonly in older adults or those with weakened immune systems and can have long-lasting complications. These complications include postherpetic neuralgia, vision loss, neurological problems, skin infections, encephalitis and even death. The risk for herpes zoster at a later age increases when primary infection with the VZV occurs in younger children.

Although some diseases, especially childhood illnesses, are often thought of as relatively harmless, every natural disease is associated with a risk for serious complications. Prior to the licensure of a long-lasting and highly efficacious varicella vaccine, tens of thousands of hospitalizations and hundreds of deaths occurred annually worldwide as a result of chickenpox.

Advances in immunology have led to a vaccine that has made an extremely common disease become almost completely preventable. Parents strive to act in the best interests of their children. Beyond individual protection from disease, vaccination provides valuable protection for the unvaccinated or those unable to be vaccinated due to age, illness or other contraindications. Deliberately exposing a child to a disease takes on risk for severe complications and even death to the child or others around them. It is a risk not worth taking.