Dystrophic toenails in a 4-year-old boy

A 4-year-old boy presents with concern for toenail changes. His toenails were normal at birth. Nine months before presentation his mother noticed three of the nails on his left foot were yellow. These toenails have since darkened in color and have become thicker than his other nails. His fingernails are unaffected. He has no pain, and the remainder of his skin exam is normal. His parents have not attempted any treatment yet. The boy is bothered by the appearance of the nails and generally keeps his feet covered. His father has also noticed white debris on some of his toenails but denies thickening or discoloration.

On exam, you note the second, third, and fourth toenails of his left foot are yellow, rough and hyperkeratotic with subungual debris (Figure). He has minimal scale on his toes. You send a nail clipping for fungal stains. 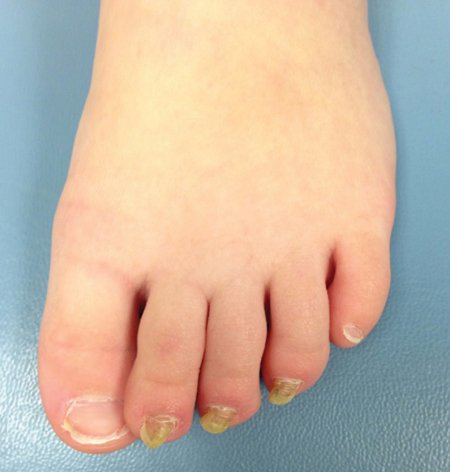 Onychomycosis (fungal infection of the nail) is uncommon in children. The most common pathogen cultured is Trichophyton rubrum, and toenails are more often affected than fingernails. Onychomycosis takes several different forms. The typical presentation in children is the distal lateral subungual pattern, as seen in our patient.

This form is characterized by affected nails being thick (hyperkeratotic) and yellow, often with accompanying subungual debris. These changes typically begin at the distal and lateral edges of the nail. Separation of the nail plate from the nail bed may be seen and is known as onycholysis. Other forms of fungal nail infections, such as superficial white onychomycosis, proximal subungual onychomycosis, Candida infection, and others are seen much more rarely.

The differential diagnosis primarily includes inflammatory processes when multiple nails are involved. Patients with psoriasis can have subungual debris and nail plate changes that mimic onychomycosis. The nail changes can occur without current skin or joint involvement. Children with alopecia areata can have nail pitting and dystrophy but typically do not have marked subungual debris. Trachyonychia, sometimes called twenty nail dystrophy, involves all of the fingernails and/or toenails, and characteristically the nails are rough in texture. It can be seen in patients with psoriasis and alopecia areata, as well as those with lichen planus. Trachyonychia can also be an isolated finding; some cases spontaneously improve.

Unilateral or bilateral great toenails can appear dystrophic in patients with congenital malalignment of the great toenails. In this condition, the great toenails deviate laterally due to malaligned nail matrices; the malalignment is present at birth. Nails can have associated color change and appear abnormal. They do not have the marked subungual debris seen in patients with distal subungual onychomycosis. They often have associated paronychia. When one nail is affected, trauma with subsequent nail dystrophy is the primary alternative diagnosis.

Treatment of onychomycosis often requires oral medication, although oral treatments are not FDA approved for this indication in children. Terbinafine is often the agent of choice, but treatment for several weeks is required. Due to risk of hepatic toxicity, laboratory monitoring is often performed in patients requiring terbinafine for nail infections. Itraconazole is also effective. Fluconazole and griseofulvin may be less effective alternatives. Confirmation of infection with histopathology and/or culture is considered standard of care before prescribing an oral antifungal medication for suspected onychomycosis.

For patients with limited involvement and/or patients who would like to avoid oral medicine, a trial of topical therapy is reasonable. A recent trial of topical ciclopirox lacquer applied daily and removed weekly showed promising results, with 77% of treated patients demonstrating mycologic cure at week 32 (end of study). The lacquer is not FDA approved in patients under 12 years of age, although it was well tolerated in the trial. Concurrent tinea pedis must be cleared to prevent reinfection. Additionally, parents and family members should examine themselves in an attempt to identify if a close contact is the source of the infection.

Onychomycosis typically presents as asymptomatic, indolent, yellow discoloration of the nail plate with subungual debris. Practitioners should be aware of this condition as it is a treatable cause of nail dystrophy.