Making a definitive diagnosis for a pediatric patient presenting with conjunctivitis can be difficult. Conjunctivitis in the pediatric patient can be mimicked by nasolacrimal duct (NLD) obstruction and caused by allergies, bacteria, and viruses. Because antimicrobial cultures take time and are not always accurate, the diagnosis and treatment of conjunctivitis are often based on the physician’s knowledge regarding the current literature on likely pathogens and clinical experience. Therefore, pediatricians must be aware of the clinical signs and symptoms that can provide a differential diagnosis of conjunctivitis, so that it can be properly treated.

A definitive diagnosis of NLD obstruction can be made by digital massage of the lacrimal sac. When massaged, the nasolacrimal duct will produce a reflux of mucous from the puncta. The fluorescein dye disappearance test is most helpful when the condition is unilateral. After fluorescein dye has been administered to each eye, the dye will take longer to clear from the eye with NLD obstruction.

Acute hemorrhagic conjunctivitis (AHC) is most commonly caused by a picornavirus, usually Coxsackie A24 or enterovirus 70. The presentation of AHC is often dramatic. The eye will become acutely painful and possibly photophobic even before hemorrhages can be seen. The subconjunctival hemorrhages that characterize this disease begin as petechiae which then coalesce and can involve the entire subconjunctiva. While highly contagious, AHC is self-limiting and its complications are rare. 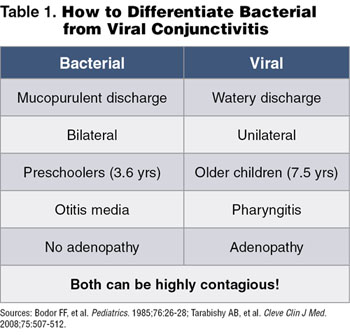 Ocular Pathogens in Bacterial Conjunctivitis
Studies have shown that pediatric acute conjunctivitis is most often caused by bacteria. Viruses and allergies are the second and third most common causes (Figure 1).6,7 The younger the patient, the higher the likelihood of a bacterial etiology of the conjunctivitis. 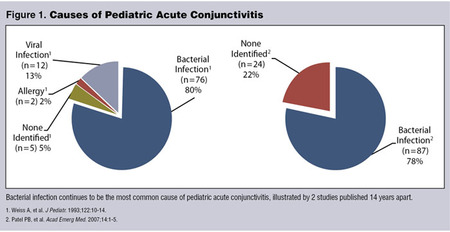 A variety of studies have been performed to determine the organisms responsible for conjunctivitis. In a study of 95 patients with acute conjunctivitis and 91 control children of similar age, specimens of the lid and conjunctiva were obtained for culture and conjunctival scrapings were stained with Giemsa and Gram stains. Bacterial infections were identified in 80% of patients, viral infections were identified in 13%, and allergies in 2%. No cause could be determined in 5% of patients. Of the patients with bacterial conjunctivitis, Haemophilus influenzae accounted for 58.1% of all bacterial cultures. Streptococcus pneumoniae was the second most common pathogen, accounting for 27.1% of bacteria cultures. Moraxella catarrhalis was isolated from cultures in 8.1% of patients. Staphylococci accounted for 4.1% of cultures and species included Staphylococcus epidermis (2.7%) and other coagulase-negative staphylococci (1.4%). Staphylococci, corynebacteria, and alpha-hemolytic streptococci were the predominant organisms recovered from the lids of control subjects.6

In a prospective study in a children’s hospital emergency department published in 2007, conjunctival swabs were obtained for bacterial culture from 111 patients aged 1 month to 18 years (mean age, 33 months) who presented with red or pink eye and/or the diagnosis of conjunctivitis. Bacterial cultures were positive in 78.4% of the patients tested. Nontypeable H influenzae accounted for 82% of positive cultures, S pneumoniae for 16%, and Staphylococcus aureus for 2%.7 The decrease in the proportion of isolates positive for S pneumoniae compared to the study published in 1993 may be due to pneumococcal conjugate vaccine immunizations.

A prospective observational cohort study at an urban pediatric emergency department was published in 2010. Conjunctival swabs were taken from children aged 6 months to 17 years who presented with conjunctival erythema, eye discharge, or both. The median age was 3 years. Patients were excluded from the study if they had a history of ocular trauma, were exposed to a noxious chemical, wore contact lenses, or had used antibiotics in the previous 5 days. Bacterial cultures were isolated from 64.7% of the 368 patients enrolled in the study. H influenzae accounted for 67.6% of positive cultures, S pneumoniae for 19.7%, and S aureus for 8.0% (Figure 2).8 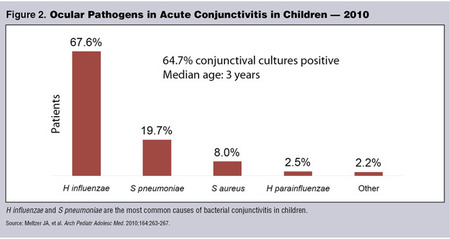 This study also investigated how it could be determined that conjunctivitis is not likely to be of bacterial etiology. They determined 4 factors that were likely to be associated with cultures that were negative for bacteria:
In this study, 92.2% of patients with all of these factors had cultures that were negative for bacteria and 76.4% of those with 3 factors had negative cultures. These data can aid a physician in deciding whether or how to treat a patient in some cases.

The outbreak at Dartmouth College in New Hampshire in 2002 is especially significant because outbreaks of conjunctivitis in college-aged students are usually viral in etiology. From January 1 through February 15, 197 students were diagnosed with conjunctivitis. A viral cause was initially suspected, but conjunctival swabs from 12 students grew S pneumoniae. Because of the high number of cases and the unusual bacterial etiology in college-aged students, an investigation was initiated. Specimens were sent to the Dartmouth-Hitchcock Medical Center for culture and identification. Subcultures of presumed S pneumoniae isolates were then sent to the CDC for further analysis.9

Results of the investigation demonstrated that between January 1, 2002 and April 12, 2002, 698 of the 5,060 students enrolled at Dartmouth College were diagnosed with conjunctivitis. During similar periods in 2000 and 2001, only 66 and 92 students, respectively, were diagnosed with conjunctivitis. During the 2002 outbreak, 34 students suffered repeated infections as defined by visits to the health center for conjunctivitis by the same student that occurred more than 14 days apart. The attack ratio among the 3,682 undergraduates and 1,378 graduate students was 18.7% and 2.5%, respectively. Of the positive cultures, 43.3% grew nonencapsulated pneumococci.9 This outbreak exemplifies that bacterial conjunctivitis can occur in young adults and conjunctivitis should not be assumed to be due to adenovirus in this age group.

Nontypeable pneumococcus also caused an outbreak of bacterial conjunctivitis in Westbrook, Maine later in 2002. From September 20 to December 6, at the index elementary school, a total of 101 students (out of 361) had at least 1 episode of conjunctivitis. Eleven of 20 students tested (55%) had an episode of culture-confirmed pneumococcal conjunctivitis. Additionally, school nurses and child care staff in the community reported an additional 4% of students attending kindergarten through grade 12 at 4 schools, and 9% of children attending 3 community child care centers, having conjunctivitis during this time period.

Among the 53 students with conjunctivitis at other schools, 10 (19%) had a family member at the index school, and seven (29%) of 24 ill child care attendees had a sibling at the index school. Of 15 conjunctival specimens collected from students at other schools, 5 (33%) grew S pneumoniae. The CDC advises, “health care providers and public health officials should be aware that nontypeable S pneumoniae can cause outbreaks of conjunctivitis in school-aged children and college students; outbreaks should be reported to state health departments and the CDC.”10

Antibiotic Resistance and Bacterial Conjunctivitis
In a retrospective cross-sectional study, the microbiology records of all patients (adults and children) with bacterial conjunctivitis seeking treatment at Bascom Palmer Eye Institute in Miami from January 1, 1994 through December 31, 2003 were reviewed. For an eye to have been included in the study, conjunctival swabs must have resulted in a positive culture. Over this 10-year period in South Florida, the most common isolate from the 2,408 consecutive swabs was S aureus (37.6%). Children < 7 years of age were most likely to have gram-negative infections, most frequently H influenzae, but S aureus was the second most common isolate in children younger than 6 years of age. Of the S aureus isolates, 19.1% were resistant to methicillin. The incidence of methicillin-resistant S aureus (MRSA) increased over the decade. There were also 2-fold and 3-fold increases in resistance of gram-positive organisms to erythromycin and ciprofloxacin.11

Nosocomial and community-acquired MRSA infections have also been reported in children. Many neonatal intensive care units (NICUs) take weekly pharyngeal swabs of every neonate to test for MRSA colonization. Neonates who are colonized with MRSA may show no signs of infection but MRSA infections in neonates are possible. In 1 report, a 7-day-old neonate was referred to the ophthalmology team with a 1-day history of purulent conjunctivitis in the right eye. The conjunctival swab taken before any antibiotics were administered grew MRSA. Both parents were also found to be colonized by MRSA and likely transmitted it to their child.12 In addition, community-acquired MRSA has caused at least 1 case of orbital cellulitis in a non-immunocompromised child and at least 1 case of chronic dacryocystitis secondary to congenital NLD obstruction.13,14 Thus, healthy infants can harbor MRSA and pediatric community-acquired MRSA can occur.

H influenzae and S pneumoniae still account for between 85% and 98% of all cases of bacterial conjunctivitis.6-8 Nontypeable S pneumoniae is also the most common cause of atypical outbreaks of bacterial conjunctivitis. Therefore, when treating a patient empirically, fluoroquinolones are a reasonable choice. They are the only class of drugs effective against both H influenzae and S pneumoniae and against which neither organism has developed significant resistance.15 S pneumoniae is generally resistant to gentamicin, tobramycin, polymyxin B/trimethoprim, and azithromycin, and H influenzae has developed resistance against erythromycin. The fluoroquinolones are also effective against S aureus, a less common but still significant cause of bacterial conjunctivitis. However, methicillin resistance in S aureus isolates is a marker for multidrug resistance, including resistance to the fluoroquinolones. Of the antibiotics tested by Ocular TRUST, only trimethoprim retained high efficacy against MRSA in vitro; 95% of MRSA isolates were susceptible to trimethoprim.15

The US Public Health Service, the CDC, and in-hospital antibiotic monitoring teams disseminate policies to help reduce the spread of antibiotic resistance. However, they can only monitor antibiotic use in humans. The use of antibiotics in agriculture has not been regulated. Food animals receive between 40% and 80% of antimicrobials in the United States each year. Many of these antibiotics are the same or similar to antibiotics that are used in humans. Most of these antibiotics, however, are not used to treat disease. Healthy animals receive low doses of antimicrobial agents in their feed over prolonged periods of time to promote growth, to increase feed efficiency, and to prevent disease. Because resistance genes are bred and transferred within environmental reservoirs that contain bacteria and antibacterial agents in less than bactericidal concentrations, this nontherapeutic use of antibiotics is likely to select for organisms with genes conferring resistance to those antibiotics. Exposure to low dosages of antibiotics over long periods of time creates selective pressure for organisms to mutate, develop resistance genes, and transfer these genes horizontally to other organisms.17,18

While bacteria spread genes for antibiotic resistance to other bacteria, humans disseminate antibiotic resistant strains of bacteria internationally. Global travel increases the biodiversity of organisms. When bacteria are introduced to a region where they were previously absent, reduced natural selection leads to increased genetic drift and increases the number and variety of strains that develop from that species of bacteria. Certain strains of S aureus were already resistant to methicillin before methicillin was ever used as an antibiotic. These strains have increased in number and diversity. New strains can initially be unique to a geographic region until person-to-person contact spreads these strains across from country to country and across oceans.19,20 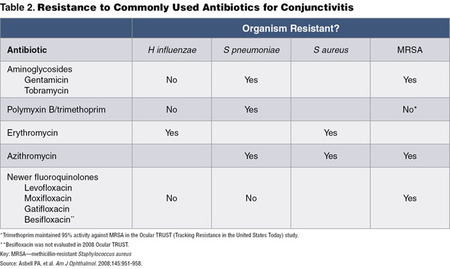