A tick regurgitates the spirochete from its intestinal tract into the bloodstream of the patient and causes infection.

A 6-year-old boy presented to the emergency room in July with a history of right facial weakness for one day, headache and neck stiffness.

During the two previous weeks, he had been lethargic and complaining of headache and neck stiffness. He also had several episodes of vomiting. His pediatrician diagnosed otitis externa 10 days prior to his emergency room visit and treated him with eardrops. The child had no history of fever, rash, joint pain or swelling. He had no change in vision, weakness or seizures. His appetite was decreased, and he had lost three pounds during the course of his illness.

The patient lives in a wooded area in Maryland, and had been camping in New Jersey one month prior to admission. He had no known tick bites. Of note, the family dog tested positive for Lyme disease and the patient’s 3-year-old sister was treated for Lyme disease one year ago.

On physical examination, the child appeared tired but cooperative. His face was asymmetric with right-sided mouth drooping that was particularly prominent when he smiled. He could not close his right eye tightly. The nasolabial fold was decreased, and he could not wrinkle his forehead on the right side. He had neck stiffness and tenderness to posterior palpation. Kernig’s and Brudzinski’s signs were negative. His heart had a regular rate and rhythm, with normal S1 and S2 heart sounds, and no murmur. His lungs were clear to auscultation bilaterally. His abdomen was soft, nontender and nondistended, without hepatosplenomegaly. He had full range of motion of all joints without swelling. He was noted to have a faint, erythematous rash on his right thigh, similar to the one shown in figure 1.

Lyme disease, the most common tick-borne disease in the United States, occurs most commonly between April and October. Many cases occur during June and July when the nymphal form of the tick is most active. Most cases of Lyme disease occur in the Northeast from southern Maine to northern Virginia, although the disease can also be found in states in the upper Midwest, including Wisconsin and Minnesota, and in northern California and Oregon. Borrelia burgdorferi, the organism responsible for Lyme disease, is a spirochete, which is transmitted in the East and Midwest by the deer tick Ixodes scapularis and in the West by the deer tick I. pacificus. In most cases, there is no report of tick bite preceding the development of symptoms. Lyme disease can occur at any age, but is most common in children aged 5 to 9 years. 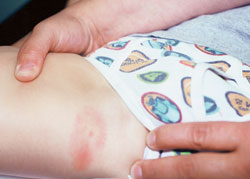 A tick usually must be attached for at least 36 hours, according to the Red Book before it can regurgitate the spirochete from its intestinal tract into the bloodstream of the patient and cause infection. One or two weeks following transmission of B. burgdorferi, the early localized stage of the disease usually occurs, which is characterized by the erythema migrans (EM) rash. The rash begins as a red papule at the site of the tick bite and expands to be an annular, erythematous flat rash of at least 5 cm in diameter. The rash may also have partial central clearing, giving it a bull’s eye or targetlike appearance. The rash may be accompanied by fever, malaise, headache, mild neck stiffness, myalgia and arthralgia.

In untreated individuals, the infection may progress to early disseminated disease, which occurs three to five weeks following the tick bite. A secondary EM rash may be seen at this time, which is usually smaller and may occur in any location. Other manifestations of early disseminated Lyme disease include meningitis, radiculopathy, arthralgia and cranial nerve palsy. Cranial nerve VII is most commonly affected. Systemic symptoms may be present. Lyme carditis may also occur as varying degrees of heart block, although it is uncommon in children. Rarely, patients may progress to late disease, which includes recurrent arthritis and, in unusual cases, neurological manifestations. Patients with Lyme arthritis typically have a swollen knee with slightly increased warmth of the joint.

Presence of an EM rash is sufficient to make a diagnosis of Lyme disease. Overall, the diagnosis of Lyme disease is made primarily on the basis of characteristic clinical findings. The laboratory is used as an adjunct in diagnosis. Lyme IgM and IgG detected by enzyme immunoassay (EIA) or immunofluorescent antibody (IFA) testing may not be positive during the early localized stage of infection. Lyme IgM peaks three to six weeks and IgG peaks weeks to months following tick bite. A Western blot to detect IgM and IgG antibodies against specific B burgdorferi proteins is the confirmatory test for Lyme disease, and is ordered when the EIA or IFA is equivocal or positive. Patients who have Lyme arthritis should have detectable Lyme IgG antibody by EIA or Western blot.

Diagnosis of central nervous system (CNS) involvement often relies heavily on clinical presentation. In comparison with children with viral meningitis, children with Lyme meningitis have been shown to have lower temperatures, lower CSF white blood cell counts and significantly longer duration of headache, neck pain and malaise. In addition, children with Lyme meningitis almost always have one of the following: papilledema, EM or cranial nerve palsy. These symptoms are generally absent in patients with viral meningitis. In the absence of these classic Lyme disease symptoms, it is difficult to clinically diagnose Lyme disease. Lyme serologies may be helpful in these cases. Lyme IgG and IgM can also be detected in CSF specimens, although they may not yet be positive at the time of presentation with Lyme meningitis. Detection of B. burgdorferi DNA by polymerase chain reaction in the CSF is also a possibility, although the sensitivity of this test is approximately 5%, as reported by Avery et al.

For early disseminated disease without neurological involvement, such as uncomplicated arthritis or secondary EM, or for isolated facial nerve palsy, oral antibiotics may be administered for 28 days. It is important to know that facial nerve palsy may not resolve faster with administration of antibiotics, but treatment is essential to prevent further progression of Lyme disease. If CNS involvement is suspected, a lumbar puncture is indicated and 30 days of IV ceftriaxone or penicillin is the recommended treatment. Carditis should similarly be treated with parenteral therapy.

Protecting against tick bites may prevent Lyme disease. When children are in wooded areas, they should wear long pants that are tucked into their socks. Repellents containing DEET (N, N-diethyl-m-toluamide) should be used sparingly and never on the hands or face. Skin should be washed to remove the DEET following return from wooded areas. Clothing may also be treated with permethrin. Parents should also examine their children for ticks closely, paying special attention to the hairline, behind the ears and the ankles. The ticks that transmit Lyme disease are very small and, therefore, difficult to see; showering and toweling off with a dry rough towel may be helpful in dislodging attached ticks.

Barbara Jantausch, MD, is an associate professor of pediatrics in the division of infectious diseases at Children’s National Medical Center in Washington.