When treatment of head lice is reviewed, the topic area perhaps most frequently discussed is resistance to the commonly used products. What agent to use next is open to discussion, and prescribers can now choose from several new products. In 2010, the AAP published a clinical report on head lice treatment. This report continues to recommend use of the over-the-counter agents permethrin 1% or pyrethrins as first-line therapy, unless resistance is known to commonly occur in the community. When resistance to these products is suspected or known, benzyl alcohol 5% or malathion are recommended in the AAP document. Spinosad (Natroba, ParaPRO) was not labeled for use when the AAP Clinical Report was published.

Many clinical and in vitro reports of resistance by head lice to permethrin (eg, Nix, Insight Pharmaceuticals) and pyrethrins (eg, Rid, Bayer HealthCare) have been published. Regional differences in resistance patterns likely exist, although these patterns are not typically documented or standardized.

According to the AAP Clinical Report, Ovide can be used for those aged at least 2 years. Although lindane 1% is also labeled by the FDA for treatment of head lice, warnings were recently issued by the FDA for higher risk of serious adverse effects, including seizures and death, in some children. Many, if not most, clinicians no longer consider lindane a viable choice for treating head lice.

Other agents have been discussed in the literature, although they are not labeled for treatment of head lice by the FDA, and fewer data exist to support their efficacy: permethrin 5% (Elimite, Allergan), crotamiton 10% (Eurax, Westwood-Squibb Pharmaceuticals) and ivermectin (Stromectol, Merck). Some evidence indicates that increasing the concentration of permethrin to 5% (OTC products contain 1% permethrin) does not effectively kill lice resistant to permethrin 1%. Several reports evaluating ivermectin, using doses of 200 mcg/kg or 400 mcg/kg, have suggested that this antihelmintic agent can effectively kill head lice. The largest study was conducted outside of the United States in a randomized, double blind manner in 812 children aged at least 2 years. Ivermectin was given at a dose of 400 mcg/kg on days 1 and 8 and was compared with malathion lotion. More children receiving ivermectin were free of lice on day 15 compared with children receiving malathion (95.2% vs. 85%, respectively, P<.05). 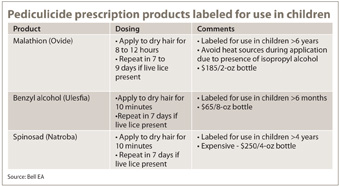 It is important to note, however, that the malathion product used in this study differs from the product (Ovide) available in the United States. Besides containing malathion, Ovide additionally contains alpha-terpineol, dipentene and pine-needle oil. Published in vitro tests have demonstrated that alpha-terpineol has some pediculocidal activity. In an in vitro test of head lice obtained from British children (head lice from the United Kingdom have previously been reported to be resistant to malathion), head lice were exposed to malathion 0.5% in isopropyl alcohol, Ovide, and Ovide vehicle (without malathion). After 4 hours of exposure, 42% of 130 lice were killed by malathion vs. 100% of 190 lice exposed to Ovide (96% mortality at 30 minutes). Instructions for application of Ovide include an 8- to 12-hour application time, and it is not known from this study if an additional 4 to 8 hours of exposure would result in additional mortality.

The newest pediculicide products include benzyl alcohol 5%, labeled by the FDA in 2009, and spinosad 0.9%, which became available this year. Ulesfia is applied twice (as it is not ovicidal), 1 week apart, and is labeled for use in children aged as young as 6 months. In clinical trials, spinosad was compared with permethrin in more than 1,000 participants in two randomized, single blind studies. Eradication of lice occurred in 84.6% to 86.7% and 42.9% to 44.9% of children receiving spinosad and permethrin, respectively (P<.05). Spinosad may have some ovicidal activity, as only 25% of participants receiving spinosad required a second application vs. 60% of participants receiving permethrin. A significant limitation of using spinosad is its cost.

Although resistance to the pediculicide products available without prescription — permethrin and pyrethrins — has been widely described and documented in the literature, significant regional differences in resistance patterns may occur. It seems reasonable to continue to use these products as first-line therapy, unless resistance is strongly suspected in the community.

When these products are used, it is important to stress their proper application and follow the package instructions very carefully. Two treatment applications should be used, at day 0 and day 9. A three-treatment schedule on days 0, 7, and 13 to 15 has also been recommended, based upon the life cycle of head lice. If treatment failure occurs after use of the OTC products, clinicians can now choose from three prescription products labeled for use in children (see Table).

Malathion has demonstrated excellent clinical efficacy in published studies, including activity against permethrin-resistant lice. Resistance to malathion has been demonstrated in Europe; however, the product available in the United States — Ovide — differs from the European malathion product, as the US product contains additional agents that provide synergistic activity. Resistance by head lice to the US malathion product has not been demonstrated. Because of its demonstrated clinical activity, malathion seems to be a good choice for use when the OTC pediculicide products fail. Although Ovide is labeled for use in children aged at least 6 years, it can be used in children aged 2 years and older, according to the AAP. Ovide is contraindicated for use in infants.

Although less clinical experience exists for Ulesfia and Natroba, they can also be considered for permethrin-resistant head lice. They are applied to hair for 10 minutes, which may be advantageous to some who object to Ovide’s 8- to 12-hour application time. Benzyl alcohol has the advantage of labeling for infants as young as 6 months of age. A limiting factor for spinosad may be its cost.

Although not FDA-labeled for treatment of head lice, ivermectin given orally remains another viable choice. A large controlled trial demonstrated clinical success of 400 mcg/kg dosing in children. Adverse effects may be greater in young children weighing less than 15 kg. As fewer data exist to document the efficacy of ivermectin, the FDA-labeled products should be used initially.