An 11-year-old girl with a warty papule

An 11-year-old girl was referred to the dermatologist for a warty papule on the left nasal side-wall. Her mother stated that this had been present since infancy, but it seemed to increase in size during the past several months and now occasionally became irritated and bled. Initially diagnosed as a verruca, the patient was treated with topical imiquimod for three months without change.

The girl was an otherwise healthy fifth-grader who was developmentally appropriate. A shave biopsy of the lesion provided clarification.

What is your diagnosis? Click to the next page to find out. 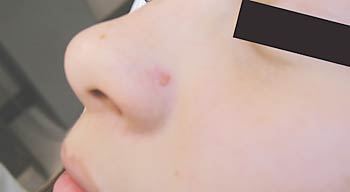 Epidermal nevi are cutaneous hamartomas that are usually present from birth or early childhood and less commonly may arise in adulthood. The epidermal nevi are then subdivided into nonorganoid (or keratinocytic) or orgainoid types (eg, nevus sebaceus or nevus comedonicus) depending on the main cellular component.

Typically there is a single lesion, such as the case with this patient; however multiple lesions may be present. The localized type (nevus verrucosus), as seen in this girl, is often present at birth as a brown to tan, warty papule or plaque.

Treatment of epidermal nevi is very challenging. A variety of medications, such as 5-florouracil, topical retinoids, topical steroids and imiquimod, among others, have been tried with limited success at best. Destructive methods such as freezing with liquid nitrogen, deep dermabrasion and superficial shave excision have also been attempted with the result that the hamartoma usually returns over time. Full-thickness surgical excision or staged CO2 laser ablation are probably the most effective interventions. This can be challenging with a larger epidermal nevus in a cosmetically sensitive area.

Multiple and linear configurations of epidermal nevi are also common and usually affect the extremities. The affected sites occur in a swirled or undulating pattern of involved and uninvolved skin following what are termed “Blashko’s lines.” This pattern has been attributed to skin cell migration during embryogenesis.

In this syndrome, defects in the central nervous system, eyes, musculoskeletal system or occasionally other organ systems arise in conjunction with the epidermal nevus.

This case revisits the old adage that when your patient fails to respond to appropriate therapy, the diagnosis should be re-examined.

Spot the Rash is a monthly case study featured in Infectious Diseases in Children designed to test your skills in pediatric dermatology issues.