A 5-year-old boy with cellulitis

A 5-year-old boy was admitted to the hospital last month for evaluation and treatment of cellulitis of the penis. He woke up with the swelling, complaining of pain the day of admission and was evaluated by his primary provider who sent him for a urology consult. Treatment was started with topical mupirocin (Bactroban, GlaxoSmithKline) and oral cefuroxime axetil (Ceftin, GlaxoSmithKline). Because the problem persisted without improvement during the course of the day, he was taken to the local hospital emergency room, which referred him to the regional medical center emergency department (ED). By history, he urinated upon awakening that morning, but not since. Because of this, he was catheterized, obtaining an undetermined amount of urine with a specific gravity of 1.028 (1.005–1.030) by urinalysis (UA). The rest of the UA was unremarkable. There were numerous other tests ordered in the ED, including a complete blood count, blood urea nitrogen, creatinine and electrolytes, that were all within normal limits. There was no history of fever or injury. According to his grandmother, he plays outside most of the time. His past medical history is significant for having familial spastic paraparesis, seizure disorder, allergic rhinitis and recurrent otitis media. However, he has never had any problem with his urinary tract. Therapy was started with IV antibiotics in the ED and continued on the ward. 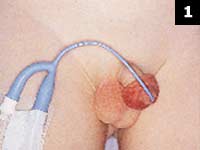 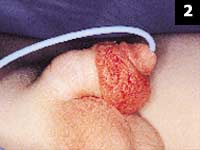 On examination, he was found to have moderate swelling just proximal to the glans with mild erythema with a catheter in place (figures 1, 2). On magnification, there appeared to be a couple of punctate marks over the area of swelling. Even though there was subjective pain by history, there was no pain on examination. The rest of his genitourinary exam was normal.

The answer is #3. The child was admitted to the hospital with the diagnoses of balanitis and cellulitis. He actually had neither. Most pediatricians and family medicine physicians in the Southern regions of the country who see a lot of children recognize this as a common summertime condition. 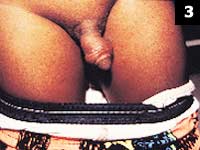 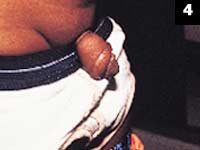 Nine years ago, I presented a similar case of a local reaction to chigger bites (figures 3 and 4) on a 4-year-old boy (“What’s Your Diagnosis?” Infectious Diseases in Children, June 1993, pp. 9, 26). While any biting insect could cause a reaction like this, the chigger mite is known for this. It is actually the bite of the red larva of the chigger mite that does this. These are very small (0.3–0.5 mm), red-colored insects and also go by various other names such as mower’s mites, harvest mites and locally as red bugs. Their natural habitat seems to be long grass and weeds, such as Johnson grass. The reaction is to the saliva of the chigger as it takes a blood meal. They typically will then jump off or be scratched off, as opposed to the scabies mite, which burrows into the skin. The genus and species of this arthropod is Eutrombicula alfreddugesi. The term “chigger” is of African origin, from “jiga,” meaning insect. Chiggers are not known to carry or transmit any diseases. However, other mites in certain parts of the world can transmit diseases such as scrub typhus and tsutsugamushi fever.

Most of the time, chiggers bite about the ankles and lower legs, especially in adults (figure 5). However, in young children, especially boys, they seem to be more attracted to the groin. It could be because young boys are more likely to be in the chigger environment with short pants on, since a similar condition is very uncommon in girls. The mite also appears to be attracted to areas where clothing is tight against the skin, such as the beltline, and boys wearing jockey-style underpants. Secondary infections (impetigo) are not as common as with mosquito bites (see figure 6, a boy wearing shorts in a mosquito environment). In my opinion, this is because there is more of a papular response to a mosquito bite than with chiggers, making it more likely that the skin will be scratched open, resulting in an opportunity for infection. On close examination of the area of swelling, with an otoscope for example, one can usually see some punctate marks where the chigger bit. These may have become distorted from scratching. 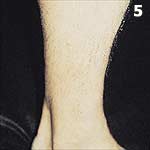 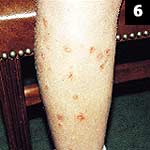 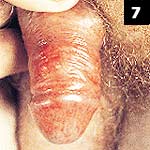 This is one of those conditions that looks much worse than it really is. The redundant skin just proximal to the glans penis has great capacity to swell with this reaction and resultant itching. However, I have never seen nor heard of a child with a significant complication from chigger bites, including interference with voiding. The child presented probably had not urinated for much of the day of admission because he had not drank much, as evidenced by his concentrated urine in the emergency department. His catheter and IV were immediately discontinued in the light of day, and he was discharged home, voiding normally, and being treated with an oral antihistamine, topical steroid cream and with a tincture of time. There were no problems noted on follow-up.

Part of the treatment is to advise the parents on prevention. Chances are, the child got this condition playing in his own yard. The yard can be sprayed with any common insecticide, which will usually rid the yard of the mite. The label should be carefully read to ensure the right product is being used and to use it according to the label instructions. The child can also be pre-treated with an insect repellant before going out into a potentially infested area. One of our senior residents commented that he had already seen about five cases of this condition so far in the clinic this summer (as of this writing).

Cellulitis is very rare in this location. When seen, it is usually going to be very obvious with spreading erythema and painful swelling. Perhaps it’s because of the rich vascular supply of the penis that makes bacterial infections of the shaft very uncommon. How many times have you seen an infected circumcision? I still perform circumcisions, by the way, when I am on weekend duty, and I still have never seen one become infected, in spite of it being a “non-sterile” procedure. Sometimes it is difficult to get a young child to differentiate between itching and pain. After all, these sensations are closely related. And sometimes, after a few hours of scratching this area, some pain may result from the resultant excoriation. But the pain of cellulitis is usually obvious.

The term balanitis comes from the Greek word balanos, meaning acorn, which presumably was descriptive of the glans penis or the glans clitoris. It may describe any inflammation of or about the glans. When seen in little boys, they are usually uncircumcised with adhesions (phimosis) and poor hygiene. One can usually express an exudate consisting of inflammatory cells, desquamated epithelial cells and other debris. It usually responds well to good hygiene with frequent retraction of the foreskin and, perhaps, a topical antimicrobial cream. It is sometimes a result of Candida overgrowth (figure 7), and an antifugal cream may be helpful. But good hygiene is the answer. If balanitis becomes recurrent, circumcision may be the best treatment. If the foreskin cannot be retracted, I refer to a urologist.

One should never rely entirely on history to rule out abuse. Any abnormality of the genital area of a child should raise the possibility of abuse. In this case, however, there was no sign of injury (bruising, constriction bands or other associated injuries) or neglect. This, plus the classic appearance of this local reaction, makes abuse unlikely.

What’s Your Diagnosis? is a monthly case study featured in Infectious Diseases in Children, with treatment information and discussion to follow.