A 13-month-old girl with pre-auricular swelling

A 13-month-old girl was admitted for evaluation and treatment of right pre-auricular swelling with pain. The onset was about six days earlier when the baby’s family noticed some erythema in the same area while combing her hair. At that time she was seen by her primary care provider, who prescribed trimethoprim-sulfamethoxazole (Bactrim, Roche). However, the problem worsened and the patient was referred to the pediatric clinic where cefdinir (Omnicef, Abbott Laboratories), a second-generation cephalosporin, was added to her treatment. Again, there was no improvement. Therefore, the patient was referred to the otolaryngology clinic, where this combination was continued for a couple of days without benefit, and then she was admitted to the hospital for further evaluation and treatment. Her past medical history is unremarkable, and immunizations are up to date. 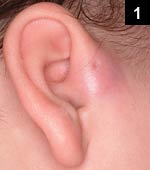 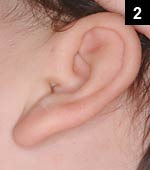 Examination revealed normal vital signs and the painful swelling and erythema of the right ear as shown in figure 1. There appeared to be a dimple in the center of the area of swelling. The ear canal and tympanic membrane were normal. Further examination revealed a preauricular pit of the left ear (figure 2).

Lab tests included a complete blood count (CBC), which was within normal limits, with a blood culture pending. A computed tomography scan was performed, as shown in figures 3–5.

This turned out to be a simple preauricular pit that got infected. These anomalies may end just under the skin in a cyst or may have “fingers” or tributaries that track down the face toward the parotid. When the epithelial cells that line these sinuses slough, bacteria can become trapped in the tract, setting the stage for an infection. This process may be aggravated by squeezing or picking at the lesion trying to drain it, which actually ends up making it worse.

The bacteria tend to be common skin organisms, such as Coagulase-negative staphylococcus, group A streptococcus or Staphylococcus aureus. However, although the culture of the pus obtained during the incision and drainage (I & D) in the operating room by the otolaryngologist grew Coagulase-negative staph in the aerobic bottle, it also grew Bacteroides fragilis, a common “gut” bug, in the anaerobic culture. Of course, children, especially infants (and sometimes hygienically-challenged adults), are more likely to transfer enteric organisms to all parts of their body. The blood culture was negative.

The patient was empirically treated upon admission with intravenous clindamycin plus ceftriaxone. After one week of IV antibiotics and two days after the I & D, she was sent home to complete a 10-day course of clindamycin orally. However, drainage alone may have been curative. A month later, the patient had elective bilateral excision of the pits without complications. 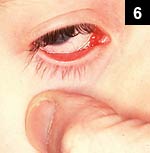 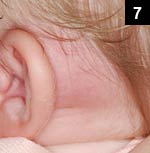 Embryologically, these pits apparently result from the incomplete fusion of structures called Hillocks that arise from the first and second branchial arches during the first trimester of pregnancy. However, a branchial cleft cyst occurs as a result of failure of the obliteration of the second branchial cleft resulting in abnormalities, such as cysts. They are more likely to involve structures of the ear or mandible and are more significant defects, which in this case were ruled out by the computed tomography scan.

Parinaud syndrome (named after the 19th century French ophthalmologist, Henri Parinaud; also known as oculoglandular syndrome) refers to conjunctivitis with ipsilateral preauricular lymphadenitis. This can be caused by a variety of infections, such as tularemia or cat scratch disease (figure 6). This patient had no conjunctivitis. Also, a swollen preauricular node is not likely to have a pit or dimple in its center.

Mastoiditis also causes painful swelling, but it would be postauricular (figure 7) rather than preauricular and would cause the pina to stick out, as shown in figure 8. 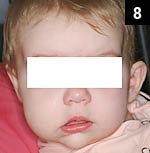 I would like to thank all of you who wrote notes of condolences regarding the loss of my mother. I was overwhelmed by the number of unsolicited letters. I tried to write you all back, but some e-mail addresses would not allow for return messages. Your words of encouragement have been invaluable in helping me through a very depressing time. Hopefully I can produce somewhat more inspiring columns in the near future.

What’s Your Diagnosis? is a monthly case study featured in Infectious Diseases in Children, with treatment information and discussion to follow.