A previously healthy 5-year-old boy presented to the emergency department with a two-hour history of abdominal pain and fever to 103°F. Upon awakening the same morning, he appeared well and was without complaint. He developed fever at school and was sent home. Subsequently, he had several episodes of diarrhea and nonbloody, nonbilious emesis.

The patient had no significant past medical history, without history of previous hospitalizations or surgeries. He took no medication and has no history of allergies. The patient had no known ill contacts. He lived at home with his parents and six siblings, all of whom were healthy. There was no animal exposure or history of travel. Family history was noncontributory. His vaccinations were up to date, and he was developmentally appropriate with no delays. A review of systems was negative for any further complaints. 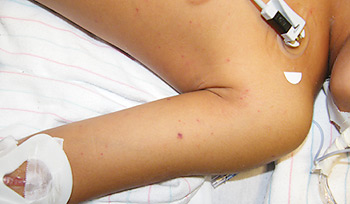 The patient developed petechiae on his body.
Source: Dawn Muench

Upon arrival to the ED, his physical exam was as follows: temperature of 103.5°F, heart rate of 151 beats per minute, respiratory rate of 20 breaths per minute and oxygen saturation of 98% on room air. He was initially alert and in no acute distress. His pupils were round and reactive, conjunctiva were clear, and his neck was supple with no signs of meningismus. Lungs were clear to auscultation bilaterally. Cardiac exam was significant for tachycardia, but no murmur, rubs or gallops were noted, and capillary refill was less than two seconds. His abdomen was nontender without rebound or guarding. No rashes or skin lesions were noted, and neurologic exam demonstrated no deficits.

Initial laboratory values were as follows: white blood cell count was 24,200/mm3 (with a differential of 80% segmented neutrophils, 10% bands, 7% lymphocytes and 3% monocytes). Hemoglobin was 13.3 g/dL, and platelet count was 286,000/mm3. Aspartate aminotransferase was slightly elevated at 45 U/L (0-37), but the remainder of liver enzymes, bilirubin, serum chemistries, renal function tests and coagulation tests were within normal limits. Urinalysis was unremarkable.

The patient was observed in the ED for several hours. He initially had two episodes of nonbilious, nonbloody emesis and developed fever to 104.8°F. Over the next several hours, the patient continued to appear alert, and vital signs remained stable. However, fever persisted, and he continued to complain of abdominal pain. He received multiple isotonic fluid boluses and ondansetron for nausea. Abdominal computed tomography was obtained to rule out appendicitis, which was negative.

Shortly afterward, the patient’s mother acutely notified the ED staff that her son had a sudden episode of fecal incontinence and became minimally responsive to verbal stimuli. He was now noted to have developed petechiae on his chest, which were not present a few hours earlier. After brief supplemental oxygen, he became more responsive and complained of a headache. Intravenous ceftriaxone, dexamethasone and additional fluid boluses were administered. Lumbar puncture was performed, which revealed cerebrospinal fluid glucose of 54 mg/dL, protein of 29 mg/dL, 112 nucleated cells (97% PMNS) and 220 red blood cells/mm3. No organisms were seen on Gram’s stain of the cerebrospinal fluid. Vancomycin was added to his antibiotic regimen, and he was transferred to the pediatric intensive care unit. His blood pressure subsequently decreased to 69 mm Hg/33 mm Hg, and he was minimally responsive. The patient was intubated, a central venous catheter was inserted, and inotropic agents were administered.

The most likely pathogen associated with this serious evolving illness is:

Gram’s stain of the blood revealed gram-negative diplococci, and culture of both the blood and cerebrospinal fluid grew Neisseria meningitidis serogroup B within 24 hours.

For the first five days of his hospitalization, the patient required mechanical ventilation and developed a severe coagulopathy and persistent hypotension. He was aggressively supported with several inotropic agents, fresh frozen plasma and blood transfusions and activated protein C for 96 hours. He was continued on intravenous antibiotic therapy with ceftriaxone and vancomycin. After about five days, he was extubated and was discharged in excellent condition after 10 days of hospitalization. He returned to school soon after and has not had any evidence of neurologic or other sequelae.

Public health was contacted after confirmation of diagnosis, and his family and classmates were treated with prophylactic antimicrobials.

N. meningitidis is a highly pathogenic organism which may cause meningitis, fulminant sepsis due to meningococcemia, or both. Despite exquisite susceptibility to many antibiotics, early diagnosis and treatment are critical, as the host systemic response can result in rapid progression to potentially irreversible sequelae or death. N. meningitidis, Haemophilus influenzae type b and Streptococcus pneumoniae have historically been the most common causes of bacterial meningitis in children, although in developed countries, rates of the latter two pathogens have decreased as a result of effective childhood vaccines. As in our patient, the symptoms do not always initially point to the diagnosis, but children can rapidly deteriorate and need immediate intervention.

N. meningitidis colonizes the nasopharyngeal respiratory epithelium of approximately 3% of humans. Transmission occurs with direct human to human contact or respiratory droplet exposure. Asymptomatic carriers are thought to be the primary source of infectious cases. Nasopharyngeal colonization is common and contributes to the development of host immunity. In a minority of cases, colonization results in invasive disease. The incubation period for N. meningitidis is generally less than four days but ranges from one to 10 days.

Rates of meningococcal disease are one to three out of 100,000 in developed countries and 10 to 25 out of 100,000 in developing countries. Approximately 1,500 to 3,000 cases occur annually in the United States. Cases occur more commonly in children aged younger than 2 years and in adolescents aged 15 to 18 years. College freshmen living in dormitories and military recruits are at significantly higher risk for invasive meningococcal disease. Other risk factors include exposure to an infected person (up to 500 times increased risk), terminal complement (C5-C9) or properdin deficiency and asplenia.

There are at least 13 serogroups of which A, B, C, Y and W135 are responsible for approximately 90% of human illness. The epidemiologic breakdown currently in the United States is estimated to be: B 30%, C 28% and Y 37%. Serogroup B, for which there is no effective vaccine, prevails in infants, causing greater than 50% of disease cases in children aged younger than 2 years. 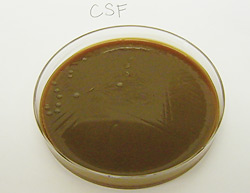 Gram’s stain of the blood revealed gram-negative diplococci, and culture of both the blood and cerebrospinal fluid grew Neisseria meningitidis serogroup B within 24 hours.
Source: Katie Charnock

Classic signs of meningococcal infection, such as petechial or hemorrhagic rash, mental status changes and signs of meningitis (vomiting, headache, photophobia, stiff neck, positive Kernig’s or Brudzinski’s sign) may not be present initially but often develop abruptly 12 or more hours later. The absence of signs for meningeal irritability does not rule out the diagnosis. Signs of shock may include leg pain, cool extremities, cyanosis, delayed capillary refill and oliguria. Vascular permeability may also increase in the lungs, resulting in respiratory distress due to pulmonary edema. Disseminated intravascular coagulation may be evidenced by subcutaneous hemorrhages, gastric and/or gingival bleeding and oozing from venipuncture sites.

Purpura fulminans occurs in 15% to 25% of patients with meningococcemia. Early antibiotic intervention while ensuring adequate perfusion may prevent this complication. Activated protein C has proven to resolve coagulopathy and may help decrease severity of damage. Debridement and/or amputation may be required in severe cases.

N. meningitidis is a nonmotile, aerobic, gram-negative diplococcus that is catalase- and oxidase-positive. It grows best on a chocolate agar plate with 5% to 7% carbon dioxide. Blood cultures are positive in 40% to 75% of cases, and cerebrospinal fluid cultures are positive in 50% to 90% of patients who have not been exposed to any antimicrobial therapy. Any prior treatment with antibiotics rapidly sterilizes cerebrospinal fluid and blood, and cultures may be negative with as little as one hour of antibiotic therapy. However, antibiotics should not be delayed to wait for a lumbar puncture despite these changes. Other sterile fluids may be cultured.

Latex agglutination testing with antibodies to meningococcal capsular antigens may be used as rapid diagnostic tests on cerebrospinal fluid specimens, although the sensitivity and specificity is considerably lower for serogroup B than for A and C. PCR assays for N. meningitidis in blood and cerebrospinal fluid may be used for rapid detection but are not currently available in most clinical laboratories.

The first step in management is early recognition, as progression to shock and disseminated intravascular coagulation may rapidly develop, despite aggressive early supportive care. Intravenous antibiotics should be administered; ceftriaxone is most common. Until the diagnosis of N. meningitidis is definitively made, vancomycin is commonly added for the possibility of highly-resistant S. pneumoniae. Laboratory tests to include a complete blood count, serum chemistries and hepatic enzymes, coagulation tests, cerebrospinal fluid cell count and chemistries, as well as blood and cerebrospinal fluid cultures, should be obtained. The vast majority of North American isolates of N. meningitidis remain penicillin-susceptible, making this an acceptable choice for therapy; however; in most cases, a third-generation cephalosporin is administered. A five-day course of therapy is adequate.

Early recognition and treatment of shock and disseminated intravascular coagulation are also crucial in the management of meningococcemia. If signs of shock are present, aggressive fluid resuscitation and inotropic therapy may be required. The use of steroids for the treatment of either septic shock or meningococcal meningitis in children is controversial, and efficacy has not been established. Trials using activated protein C, or drotrecogin alfa (Xigris, Eli Lilly) in patients with severe sepsis have been promising. Activated protein C has anticoagulant and antiinflammatory effects. Results of one study showed that in children, the 28-day all-cause mortality incidence was decreased, with lower incidence of serious bleeding events such as intracranial hemorrhage.

Despite improved intervention for these patients, the mortality remains in the range of 8% to 10%. Mortality rates are highest in adolescents, with rates as high as 20%. Sequelae occur in approximately 11% to 19% of patients, typically in the range of four to 10 days after onset of systemic illness. Immune complex-mediated symptoms, most commonly arthritis, occur in approximately 15% of children. Other complications include loss of digits or limbs, pericarditis with possible progression to tamponade, cranial nerve VI, VII and/or VIII dysfunction, permanent hearing loss, mental retardation, disseminated musculoskeletal meningococcemia (skin lesions, joint involvement and tenosynovitis) and pneumonia. Neurological sequelae occur less commonly in meningococcal meningitis than H. influenzae and S. pneumoniae.

The CDC’s Advisory Committee on Immunization Practices recommends meningococcal vaccine for high-risk people, including college freshmen living in dormitories, military recruits, microbiologists and health professionals regularly exposed to N. meningitidis, as well as people with terminal complement deficiency or with actual or functional asplenia. Anyone traveling to an area with high rates of meningococcal disease, particularly sub-Saharan Africa, should be vaccinated.

A tetravalent polysaccharide vaccine against N. meningitidis types A, C, Y, W135 known as MPSV4 (Menommune, Sanofi Pasteur) was approved in 1981 and has been recommended to high-risk patients aged older than 2 years. The newer conjugated vaccine known as MCV4 (Menactra, Sanofi Pasteur) was approved in 2005 and offers improved and longer-lasting immunity to the same four serotypes. Currently, Menactra is only approved for use in patients aged 11 to 55 years. As of 2006, the ACIP-recommended universal vaccination of all children aged 11 to 12 years is part of the routine vaccination schedule.

Chemoprophylaxis should be administered within 24 hours to close contacts of a person with this illness. In school or day care settings, children, caregivers and teachers in the same classroom or childcare room should be treated with prophylaxis. Prophylactic antibiotics are recommended for health care workers providing mouth to mouth resuscitation, endotracheal intubation and suctioning. Approved treatment includes rifampin or ceftriaxone in children and ciprofloxacin in adults.