When Would You Use Patellar Tendon Autograft as Your Main Graft Selection?

I use patellar tendon autograft as my main graft selection in young, high-demand, active patients. Bone-patellar tendon-bone (BTB) autograft anterior cruciate ligament (ACL) reconstruction has the longest proven record of successful outcomes and is the technique by which all others are compared (Table 6-1). We believe that this graft may also have some advantages for a subset of high-demand patients who desire or require a quick return to cutting and pivoting sports. Specifically, BTB autograft allows for bone-to-bone fixation with metal interference screws, which has been shown to be a strong and reliable fixation method with an initial fixation strength of 558 Newtons (N).5 Additionally, there is evidence to support using BTB autograft in order to minimize hamstring avoidance, especially in young female soccer players.6 For these several reasons, BTB autograft is our graft of choice for young, high-demand, active patients without pre-existing anterior knee pain (Figure 6-1). 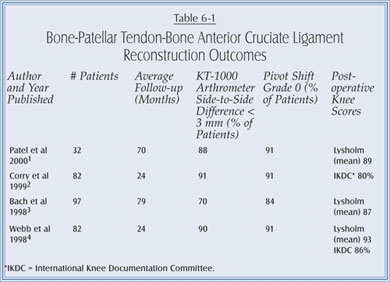 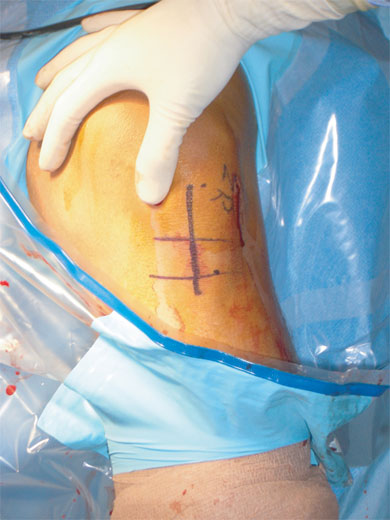 Deciding which graft to recommend to a patient for ACL reconstruction involves many factors. Ideally, an ACL graft should have biomechanical and structural properties that are similar to those of the patient’s own ACL. The initial graft tensile strength of bone-patellar tendon-bone autograft is 2977 N with a stiffness of 620 N/mm. This is over 1.5 times the strength and 4 times the stiffness of the native ACL.10,11 Additionally, graft fixation should be secure enough to allow early rehabilitation with rapid incorporation of the graft. Bone-patellar tendon-bone autograft allows for bone-to-bone healing with metal interference screws, one of the most secure methods of fixation.

I believe that the choice of which graft to use should come from a thorough discussion of the risks and benefits of all available choices and should ultimately be an informed decision by the patient. In a systematic review of 9 randomized controlled studies comparing patellar tendon and hamstring tendon autografts, Spindler et al found no significant difference in failure rates between graft sources.12 This suggests that there may be no significant difference in outcomes among properly performed ACL reconstructions with different graft sources. Certainly, a surgeon’s comfort level with a particular graft selection should play a role in deciding which graft a patient chooses. Regardless of graft choice, the best chance for a successful outcome will come from a well-planned and properly performed surgery. For most surgeons, this will be accomplished by performing the technique that he or she is most familiar with and comfortable performing.

The views expressed in this article are those of the author and do not necessarily reflect the official policy or position of the Department of the Navy, Department of Defense, nor the United States Government.