How Do You Manage a Combined ACL/MCL Injury?

The anterior cruciate ligament (ACL) prevents anterior translation of the tibia on the femur and contributes to resistance to internal and external rotation while the knee is extended. It is a secondary stabilizer to valgus stress in full extension. The medial collateral ligament (MCL) resists valgus stress at 30 degrees of knee flexion. It also contributes to limiting anterior and posterior translation, as well as rotation, of the tibia. Thus, when both ligaments are disrupted, the knee can become unstable in several planes of function.

MCL injuries are classified as grade I, II, or III, as described by the American Medical Association’s Ligament Injury Classification.1 A grade I injury indicates a microscopic tearing of the ligament without laxity. A grade II is a partial tear of the ligament with some joint widening but not a complete disruption. On physical examination, there remains a firm endpoint on valgus (abduction) testing. A grade III injury implies loss of integrity of the ligament, with medial joint widening and a soft or nonexistent endpoint upon valgus (abduction) stress.

ACL rupture along with MCL rupture can seriously compromise joint stability.2 These injuries can be difficult to treat. Multiple studies have shown that concomitant ACL reconstruction and MCL repair can lead to postoperative arthrofibrosis. However, persistent valgus instability in cases when the MCL is not repaired can compromise the results of the ACL reconstruction. Thus, I have developed this algorithm:

* When a patient has a grade I MCL injury with concomitant ACL disruption, I treat this as an isolated ACL and reconstruct the ACL as soon as full range of motion is achieved.

* In grade II MCL injuries, I treat the patient in a hinged knee brace for 3 to 6 weeks, achieve full range of motion, and reconstruct the ACL when motion returns and valgus stability is established.

* A grade III MCL injury implies a complete rupture of the superficial and deep ligament, resulting in incompetence of the medial knee structures. Magnetic resonance imaging (MRI) can detect the exact location of the tear of the MCL.3 For a distal avulsion (off the tibia), which is superficial ligament disruption along with deep meniscotibial ligament failure (Figure 3-1), I opt for acute fixation of the MCL with concomitant reconstruction of the ACL. I believe that persistent synovial fluid under the ligament from disruption of the medial capsule prevents adequate healing of the ligament to bone. 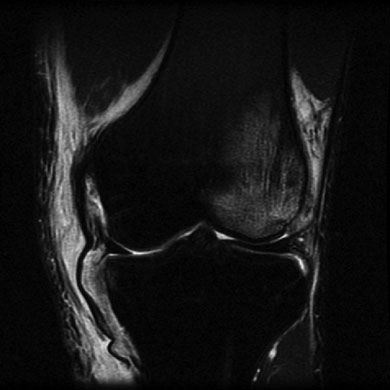 For this distal avulsion of the MCL, I utilize suture anchors for the deeper fibers of the MCL if the meniscus is subluxated and most often secure the distal aspect of the ligament (the superficial ligament) over a staple post (Figure 3-2), passing under the pes tendons, with the knee in extension. I take care to ensure that this repair is done at the isometric point, as overtightening the ligament can result in motion restriction. Figures 3-3 and 3-4 show postoperative radiographs following ACL reconstruction with MCL repair. Fixation can also be accomplished with a screw and soft tissue washer. 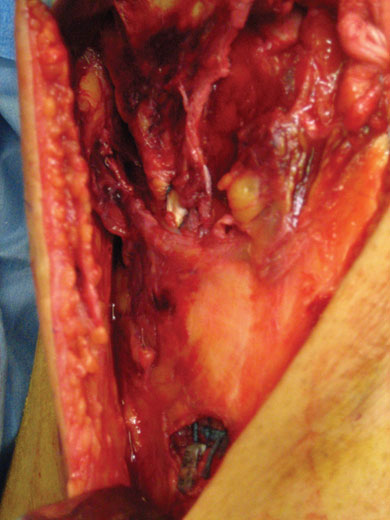 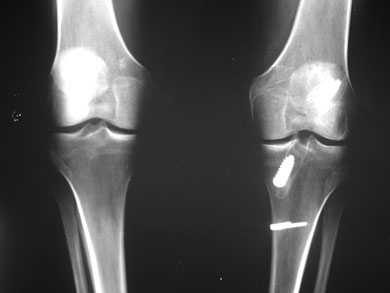 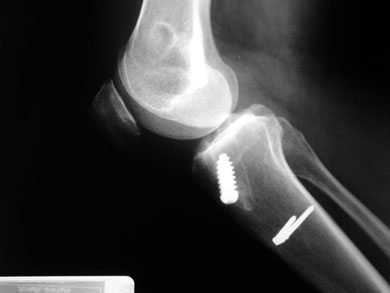 Figure 3-4. Postoperative lateral x-ray showing the fixation of both the ACL and MCL grafts.

Postoperatively, I treat the patients with combined ACL and MCL injuries with reconstruction/repair in a hinged knee brace for approximately 3 to 4 weeks. Range of motion exercises and quadriceps strengthening exercises are begun 1 to 2 days following surgery.

A prospective randomized study by Halinen et al4 compared 2 groups of patients with combined ACL and grade III MCL ruptures. One group had ACL reconstruction alone; the other group had concomitant MCL repair. There was no significant difference in outcomes between the 2 groups at an average follow-up of 27 months. Shelbourne and Porter5 compared groups of patients with these combined ligament injuries who either underwent ACL reconstruction alone or who underwent ACL reconstruction with MCL repair. The authors found that these 2 groups had no difference in valgus laxity, range of motion, or subjective measures.

Hillard-Sembell and her coauthors6 found no late instability among 3 different groups of patients: ACL reconstruction and MCL repair, ACL reconstruction only, and nonoperative treatment for both. They retrospectively reviewed 66 patients at an average follow-up of 45 months. While there was no clinical instability evident, there was increased medial side opening on stress radiographs in 8 patients, 6 of whom had not undergone an MCL repair. Because of the small numbers, however, there was no significance found in this outcome.

Nakamura’s MRI study3 concluded that the location of the MCL injury can predict the outcome of nonsurgical treatment of MCL injuries in combination with ACL reconstruction. Eleven of 17 patients had regained valgus stability at 6 weeks after bracing, and they underwent lone ACL reconstruction. All but one of these patients had an MCL lesion at the femoral attachment site. Six patients whose injury was extensile from the femoral epicondyle to the joint line had residual instability and went on to have surgical intervention for both the ACL and MCL. These findings are consistent with what I have seen in my practice.

2.  Noyes FR, Barber-Westin SD. The treatment of acute combined ruptures of the anterior cruciate and medial ligaments of the knee. Am J Sports Med. 1995;23:380-389.

6.  Hillard-Sembell D, Daniel DM, Stone ML, Dobson BE, Fithian DC. Combined injuries of the anterior cruciate and medial collateral ligaments of the knee. Effect of treatment on stability and function of the joint. J Bone Joint Surg Am. 1996;78:169-176.