Thorough assessment should be performed after a first-time patellar dislocation

Oftentimes, the injury results from multidirectional forces and rotation can accentuate deforming forces. When the foot is firmly planted on the ground, internal femoral rotation combined with external tibial rotation can result in a dislocation without any underlying pathoanatomy predisposing the patient to patellar dislocation.

Common pathologies associated with a first-time lateral patella dislocation includes medial patellofemoral ligament (MPFL) injury and medial patellofemoral retinaculum disruption. Osteochondral fractures occur in 25% of acute dislocations. The MPFL is the primary restraint to lateral patella translation and centers the patella in early knee flexion (Figure 1). Disruption to the MPFL has been discussed extensively as it is provides 53% of restraint in lateral patellar displacement. Medial injury is not restricted to the MPFL alone as Elias described injuries to the inferior vastus medialis obliquus (VMO), medial retinaculum and multifocal injury to the medial stabilizers.

Although the MPFL continues to be studied and discussed, it is a thin structure within layer two of the medial knee soft tissues and difficult to identify. It is closely attached to the undersurface of the VMO and standard surgical approach can be difficult separating the MPFL from the overlying VMO fascia without cutting into the MPFL. Considering the medial patellar stabilizers as a “complex” recognizes additional structures that assist the MPFL in restraining lateral patella translation. Warren and Marshal described the medial retinacular complex consisting of three layers. Conlan and colleagues later described additional ligaments: medial patellomeniscal ligament, patellotibial ligament and parapatellar retinacular fibers. The medial retinacular complex then takes into account the confluence of medial soft tissue anatomy in providing patella stability. 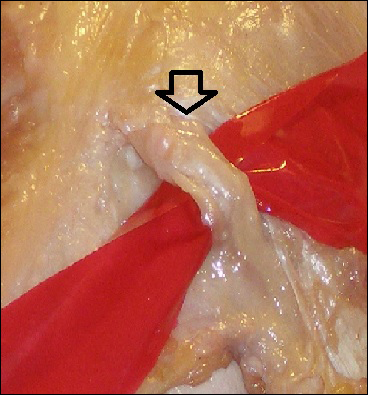 Figure 1. The MPFL is a thin structure and can be difficult to identify during surgical dissection. In this cadaveric dissection, the MPFL (black arrow) can be more easily identified from its deep surface by everting the patella medially.

A thorough history should be obtained. Pertinent to the history includes information on the activity or sport which the event occurred, position of the leg and direction of force. Some patients are able to describe the sensation of lateral patella instability after a traumatic episode. In cases of a self-irreducible dislocation, patients will describe appearance and sensation of the patella over the lateral side of the knee necessitating a physician reduction. Others will be able to report some type of knee injury but not able to pinpoint the symptoms resulting from patellar instability in many cases where the patella reduces quickly and spontaneously. 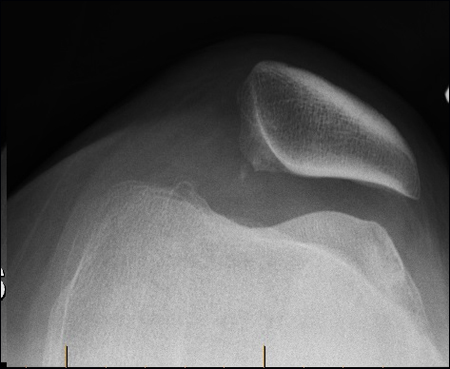 The physical exam should be comprehensive including the general well-being of the patient, the limb involved and the knee. Salient features on the clinical exam after a first-time patella dislocation include knee effusion, tenderness along the MPFL and medial retinaculum, and limited knee range of motion (ROM) as the patient is uncomfortable and guarded for the clinical exam. Aspiration of the knee hemarthrosis should be considered to help with restoring quadriceps control, reducing the patella and associated torn ligaments. In the acute setting, the patient may not be able to perform a straight leg raise, making the clinician worried about an extensor mechanism disruption. Oftentimes further imaging is required to rule out an extensor mechanism disruption.

Examining for generalized ligamentous laxity, Q angle and position of the tibial tubercle in relation to the center of the patella, VMO, adductor mechanism, patella apprehension and medial and lateral patella translation can identify predisposing anatomic risk factors for patellar instability. These findings may be difficult to elicit after an acute dislocation and become more evident on serial clinical examinations and thus checking the contralateral limb is particularly useful in the context of an acute injury. 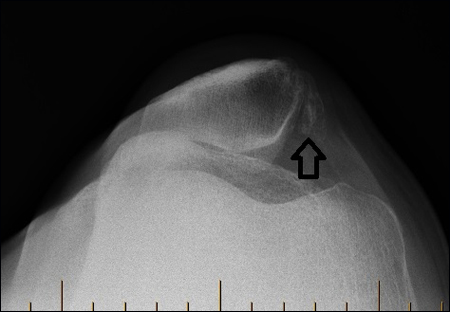 Standard radiographs include Rosenberg, lateral, and Merchant axial views of both knees. The merchant axial should be scrutinized for an osteochondral fracture involving the medial patella facet (Figure 1 and Figure 2). Radiographs may underestimate the extent of the medial facet injury as a small flake of bone on X-ray may actually represent a significant area of cartilage injury. A CT scan can provide greater detail of the osteochondral fracture size and also presence of trochlear sided lesions, trochlear morphology, and tibial tubercle to trochlear groove interval. MRI can further help in identifying size of cartilaginous defect and other pathologies from an acute dislocation such as concave impaction inferomedial patella. MRI also has the advantage of assessing the MPFL, medial retinaculum and VMO.

Most of the literature to date support initial nonsurgical treatment for the first-time patellar dislocation. A Cochrane review from 2011 concluded there was insufficient evidence to determine which treatment approach is superior.

A meta-analysis also concluded that surgery was no better than nonoperative treatment. In the overall population who sustain a first-time patellar dislocation, the literature supports nonoperative treatment. However, surgery may have a role in a subset of patients. Stefancin and Parker performed a systematic review and recommend initial nonoperative treatment for the first-time dislocation except in several specific cases including presence of an osteochondral fracture, substantial disruption of the medial patellar stabilizers, a laterally subluxated patella with normal alignment of the contralateral knee, or a second dislocation, or in patients not improving with appropriate rehabilitation. Other authors also believe surgery may reduce recurrence rate. 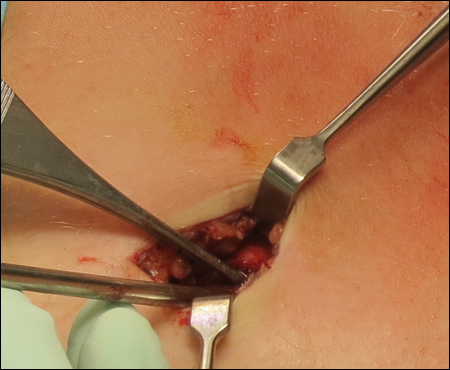 Figure 4. Photo shows the identification of the MPFL origin at the femoral epicondyle.

In the absence of pathologies that would favor initial surgical treatment, conservative treatment for the first-time patellar dislocation should be initiated. The principles of treatment include a short period of immobilization followed by physiotherapy. Common therapy approaches include modality treatments, VMO strengthening, core stability, lateral retinaculum and ITB stretching. Little evidence exists as to any optimal uniform therapy program. Goals of treatment are to restore knee ROM, quadriceps strength, attempting to improve the dynamic control of patella stability.

Consideration for surgical intervention after the acute dislocation is undertaken particularly when there is an osteochondral fracture typically off the medial patella facet. Small cartilage fragments may be managed non-surgically in low pressure area, the distal lateral margin in the lateral femoral condyle, which does not bear weight or articulate with the patella. Small fragments may be embedded/scarred within and to the medial retinaculum and do not become a lose body. If the small fragment becomes lose and cause mechanical symptoms, arthroscopic removal can be performed. Osteochondral fragments of significant size (eg, greater than 5 mm x 10 mm) should be fixed within one week of injury using bioabsorbable implants.

Given that the primary pathology after acute dislocation is medial retinacular complex and more specifically MPFL injury, many authors have studied the usefulness of MPFL repair or reconstruction. More recent arthroscopic MPFL repair has been described however the results have not proven to be superior to conservative treatment. The location of the MPFL injury and type of surgical intervention can potentially affect outcome and needs consideration. Mid-substance MPFL tears do not do as well with operative intervention.

Camanho and colleagues found reattachment of the MPFL when avulsed either from the femoral or patella attachment site provided better outcomes than non-surgical treatment. Sillanpaa and colleagues found avulsion off the femoral attachment predicted further instability and should be taken into account when planning treatment (Figure 4) while other studies have not supported operative treatment on the MPFL altogether. Elias and colleagues have shown the MPFL can be injured in two locations. A bony detachment from either the femur or patella can be accompanied by a mid-substance tear in which case a reconstruction may be more appropriate than repair.

The entire medial retinacular complex consists of many structures as mentioned earlier and with an acute lateral dislocation, it is likely the entire complex is torn instead of isolated individual ligaments. Mochizuki and colleagues identified proximal MPFL fibers attaching to the vastus intermedius while distal MPFL fibers are interdigitated with the deep layer of the retinaculum. Mochizuki discussed consideration of both fibers and attachments in planning surgical treatment.