Anatomy and biomechanics of the lateral retinaculum

Merican and colleagues noted in a biomechanical study that progressive lateral release can cause an increase in medial patellar translation, as well as a smaller increase in lateral translation. In this study, a capsular release led to a 16% reduction in medial stability at 0° and 20° of knee flexion. Marumoto noted increased medial translation with distal extension of the release, and several studies have noted symptomatic medial instability as a consequence of extension of the release proximally into the vastus lateralis.

Christoforakis and colleagues noted that the lateral retinaculum has a posteriorizing vector, which can aid in patellar stability and be compromised after release. In this study, the authors found lateral release increased lateral translation as well, with 16% to 19% decrease in force required to displace the patella 10 mm laterally at 0°, 10° and 20° of knee flexion.

When evaluating for patellar instability, the clinician should note the direction of the instability that the patient describes, as well as the location of the pain. As always, patellofemoral pain should be differentiated from instability. Any history of previous knee surgery, and particularly a history of lateral release, should be noted. As in cases of lateral instability, a history of recurrent effusions should raise the suspicion of a chondral lesion. 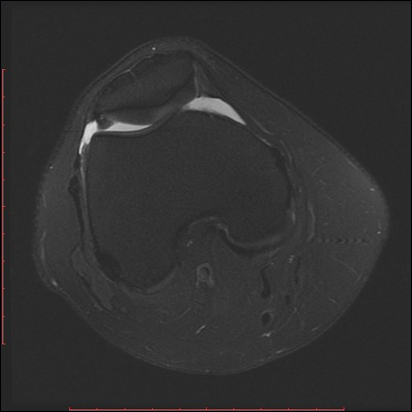 During physical examination, the clinician should check for both medial and lateral instability. Physical examination is often the primary method for diagnosis of medial instability. The patella may be translated and fully dislocate medially, and patients may have a positive reverse apprehension sign, with discomfort and apprehension with a medially directed force on the patella. The gravity subluxation test checks for medial subluxation in the lateral decubitus position with the affected leg superiorly and in full extension.

Passive medial subluxation in this position can indicate medial instability, and lack of ability to relocate the patella upon quadriceps contraction indicates detachment of the vastus lateralis from the patella. Fulkerson’s relocation test is performed by holding the patella medially during extension, and allowing the patella to reduce into the trochlea during flexion. Pain or apprehension with this maneuver is considered positive for medial instability.

The glide test should be used to quantify the amount of both medial and lateral translation in terms of patellar quadrants. Normal motion is typically two quadrants medially and laterally, with four quadrants indicating dislocation. It should be noted that even in cases of medial instability, increased lateral translation may also be apparent due to the loss of the posteriorizing vector of the lateral retinaculum.

Lateral retinacular reconstruction has been described by several authors in a method that is analogous to MPFL reconstruction, with tunnels in the patella and lateral femoral epicondyle. Other options include techniques described by Hughston using the central third of the IT band or the lateral margin of the patellar tendon. Regardless of technique, one should avoid over tightening the graft, and tensioning with knee in flexion can avoid capturing the patella. Furthermore, the knee should be checked afterward for adequate range of motion prior to closure. Lateral stability should be reassessed after lateral retinacular repair or reconstruction prior to performing an additional procedure, as tightening the lateral retinaculum will often reduce lateral, in addition to medial, translation.

When to perform lateral release?

While lateral release had historically commonly been performed in the setting of patellofemoral pathology, its indications have evolved and are now rather limited. It should not be performed as an isolated treatment for lateral patellar instability, as it can lead to the disastrous consequence of both medial and lateral instability.

In the setting of lateral patellar compression syndrome, evidenced by persistent patellofemoral pain in the setting of increased patellar tilt, a limited lateral release can be indicated. When performing lateral release, one should perform the minimal release needed to evert the patella to neutral. Straying too proximally into the vastus lateral should be avoided, as should extending this release too distally. Some authors promote lateral reticular lengthening instead of release to avoid the complication of medial instability.

In summary, the indications for isolated lateral release have become limited. In patients who have had this procedure in the past and continue to be symptomatic, the clinician should he have a high suspicion for medial instability and should assess for this carefully. Options for treatment include lateral retinacular repair or reconstruction.