Due to the presence of open growth plates at the proximal tibia and distal femur, surgical management of this entity in the skeletally immature knee is technically challenging to avoid iatrogenic injury to the distal femoral physis. Through anatomic and radiographic investigation, we have provided several tools to assist surgeons with safe patellofemoral stabilization in the skeletally immature knee.

Evolution in the treatment paradigm

Historically, nonanatomic soft tissue procedures and osteotomies were utilized to address recurrent patellofemoral instability. These procedures commonly resulted in the development of osteoarthritis as a result of increased patellofemoral joint contact pressures.

More recently, the medial patellofemoral ligament (MPFL) has been identified as the major soft tissue restraint to lateral patellar dislocation. The MPFL has been shown to provide 60% of the restraint to lateral patellar dislocation. With this greater understanding of the soft tissue restraints of the patellofemoral joint, there has been a greater interest in MPFL repair and reconstruction to address refractory patellar instability.

Need for a better method in the skeletally immature patient

Anatomic reconstruction of the MPFL has been successful at eliminating symptomatic patellofemoral instability. To assist surgeons with anatomic placement of the MPFL femoral tunnel, Schottle and colleagues described a radiographic method of localizing the femoral footprint of the MPFL on a lateral radiographic image based on several radiographic landmarks. Although Schottle’s method has been shown to be reproducible in the adult population, it has never been validated in the pediatric population. The distal femoral physis has a complex, undulating anatomy which makes extrapolation of Schottle’s technique to the pediatric population difficult. 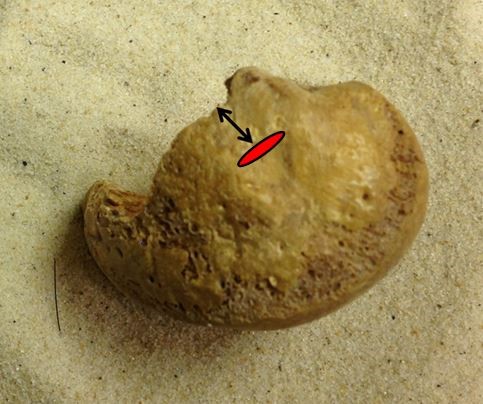 Using Schottle’s method, Shea and colleagues incorrectly concluded the MPFL femoral footprint was proximal to the distal femoral physis. This study outlined the difficulty with utilization of Schottle’s method in the skeletally immature knee. We subsequently have demonstrated that there is considerable interobserver variation in approximating the MPFL femoral tunnel utilizing Schottle’s method in the skeletally immature knee. Utilizing this method alone can place the distal femoral physis at risk. 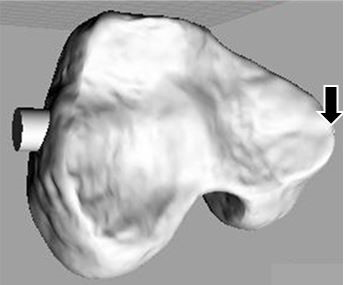 The findings of our anatomic study show that the MPFL footprint is far enough distal to the femoral growth plate to allow placement of an anatomic femoral tunnel without putting the physis at risk. Furthermore, we have also described a safe zone for femoral tunnel placement in the skeletally immature knee. By drilling the femoral tunnel at an angle of 15° to 20° distal and anterior from the MPFL femoral footprint, surgeons can minimize risk to the distal femoral physis, intercondylar notch and distal femur articular cartilage (Figure 2).

Bringing it all together

In conclusion, MPFL reconstruction can be safely performed in the skeletally immature knee. While Schottle’s method has been shown to be reproducible in estimating the site of the MPFL femoral footprint, special care should be taken in the skeletally immature knee. Considerable interobserver variability exists with this technique. This variability may place the distal femoral physis at risk during MPFL femoral tunnel drilling. 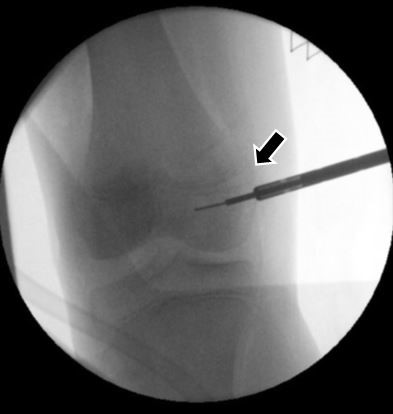 A demonstration of anatomic tunnel placement during MPFL reconstruction in the skeletally immature knee is shown. The MPFL tunnel is distal to the physis (block arrow).
Lutul D. Farrow, MD, FAOA