Anatomic tunnel placement in medial patellofemoral ligament reconstruction, particularly on the femur, is critical to restoring graft isometry and function. Although the anatomy of the medial knee has been well described, non-anatomic medial patellofemoral ligament (MPFL) femoral tunnel placement is not uncommon with proximal and anterior malposition reported in reconstruction surgery.

Associated increases in graft tension, medial tilt, and medial patellofemoral contact pressures and medial facet overload have been reported, which may lead to medial compartment arthritis. Studies have reported radiographic landmarks for delineating the MPFL femoral attachment on true lateral radiographs. However, obtaining a true lateral radiograph intraoperatively can be challenging, rendering radiographic methods for tunnel positioning potentially problematic. This is a brief demonstration of the importance of this problem.

The purpose of this study was to quantify the amount of deviation from a true lateral reference that occurs with aberrant radiographs when delineating the MPFL femoral tunnel position. This completed study will be presented at the Arthroscopy Association of North America Annual Meeting in May.

The femoral insertion of the MPFL was found on four cadaveric knees (Figure 1A). A 2-mm steel BB was positioned at the midpoint of MPFL insertion on the femur located within the osseous depression between the adductor tubercle and medial epicondyle known as the saddle region. Steel BBs were also placed at these two bony landmarks. In addition to a true lateral radiograph, aberrant radiographs 2.5°, 5° and 10° off axis were obtained in the sagittal and coronal planes. The radiographic point described by Schottle for MPFL graft fixation on the femoral side was found on each radiograph (Figure 1B) and the aberrant radiographs were digitally overlaid onto the true lateral image to allow for measurements between points in one plane at a time. 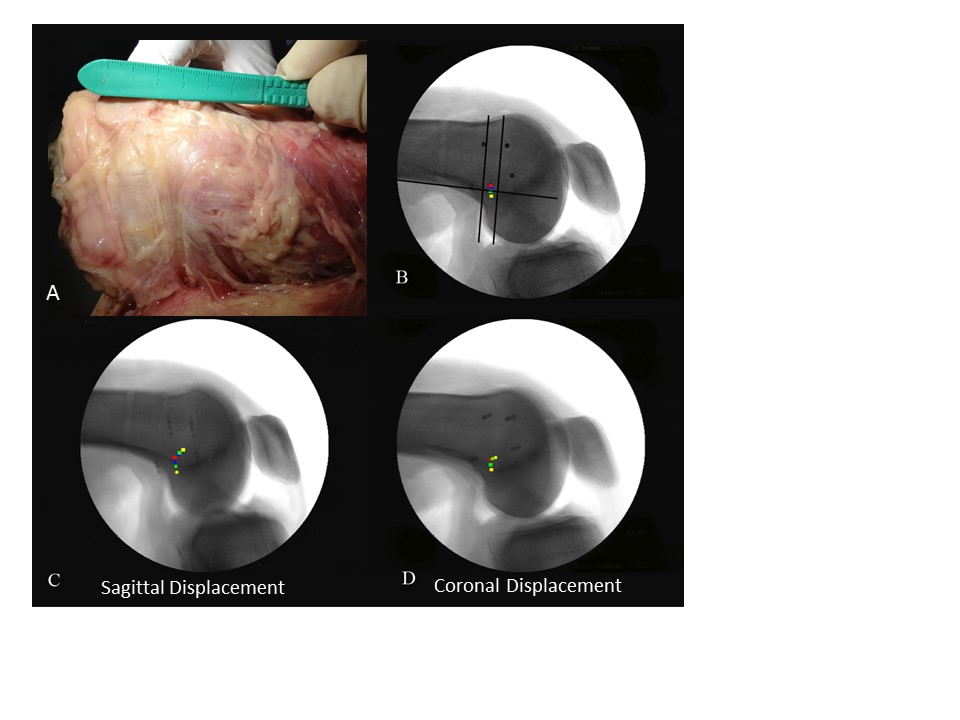 The radiographic point defined by Schottle’s method became an increasingly inaccurate reference with greater deviation from true lateral making anatomic MPFL femoral tunnel placement problematic using this method unless a perfect lateral radiograph was obtained. This is very difficult in an operating room setting. Deviation of less than 10° will lead to tunnel malposition. Obtaining a true lateral image intraoperatively is imperative when using radiographic methods. The above mentioned radiographic point found on a true lateral radiograph is helpful in estimating the region of femoral MPFL attachment, however, should not be solely relied upon intraoperatively. Most importantly, medial knee anatomy must be utilized for accurate MPFL femoral tunnel placement within the anatomic saddle region.

Cory Edgar, MD, PhD, is an assistant professor of orthopedic surgery and team physician at the University of Connecticut. He can be reached at coedgar@uchc.edu.