“[The direct anterior approach] came to the forefront as a ‘less invasive’ approach,” Michael J. Taunton, MD, associate professor at Mayo Clinic in Rochester, Minnesota, told Orthopedics Today. “It came off the heels of the other ‘less invasive’ hip and knee procedures, which have been proven to demonstrate little or no long-term benefit. So, I think many surgeons were skeptical to begin with.”

Use of the direct anterior approach in THA has increased in the last 10 to 15 years, and William G. Hamilton, MD, of Anderson Orthopedic Research Institute, said surgeons are motivated to use it because it offers the promise of a recovery with less pain and faster functional return, as well as a lower rate of hip dislocation compared with other approaches.

“Even if these differences go away by 4 to 6 weeks, patients find the possibility of an improved early recovery appealing,” Hamilton said.

“For early rehab, they performed early functional milestones about 1 week earlier, with no difference in complications at 2 months or 1 year,” Taunton said.

Another study by Taunton and his colleagues, which was published in The Journal of Arthroplasty, showed about 1% to 2% of patients who underwent THA with the direct anterior approach (n=1,573) required superficial irrigation and debridement for superficial wound dehiscence.

One possible advantage of the direct anterior approach is the belief that patients may not have to adhere to range of motion precautions after surgery, according to R. Michael Meneghini, MD.

“That, however, is a bit anecdotal because there are new studies out that show even if you have a posterior approach, you do not have to obey range of motion precautions,” Meneghini, associate professor of orthopedic surgery and director of the Indiana University Hip and Knee Center, said.

The clinical advantages to the direct anterior approach seem to be limited, Meneghini said.

“At 8 weeks, the functional recovery equalized. Then, at 1 year, there was also no difference in complications or function. There was no difference in any kind of radiographic outcome at short or long term,” Taunton said.

The direct anterior approach may be more costly and consume more resources than other THA approaches, according to Meneghini, who is an Orthopedics Today Editorial Board Member.

“It is safe to say that the complications that can occur with the direct anterior approach can be more devastating,” Meneghini said. “All surgical approaches have risks. However, I would choose one with a complication profile that is not as devastating, with minimal lasting effects.”

According to Hamilton, these reports of increased complications come as surgeons work through the learning curve. As surgeons who use the anterior approach have changed in the last 10 years from about 5% to about 40% now, based on data from an American Association of Hip and Knee Surgeons audience response survey, many surgeons have made their way through the learning curve as they changed their approach. In studying more than 5,000 THA cases performed with the anterior approach at three centers, Steven L. Barnett, MD, and his colleagues found rates of 0.9% for femur fracture, 0.4% for infection and 0.23% for dislocation, Hamilton noted.

Taunton said the published literature shows similar complication rates between all of the approaches.

However, Hamilton said that when approaching the hip from a non-anterior-based approach, the rate of sciatic or common peroneal nerve palsy increases to a similar frequency. This is rare with the anterior approach and, regardless of approach, there is a low rate of major nerve palsy.

A 2019 study by Ryan S. Patton, MD, and his colleagues in The Journal of Arthroplasty showed that, within 2 years after surgery, 24% of 680 patients who underwent THA via the direct anterior approach had positive Douleur Neuropathique 4-Interview scores for continued neuropathic symptoms to the lateral femoral cutaneous nerve. Although the percentage decreased the further out from surgery the patients were, researchers found 11% of patients were positive for continued neuropathic symptoms 6 to 8 years after surgery. Numbness of the lateral femoral cutaneous nerve was the most common symptom reported.

“[The lateral femoral cutaneous nerve] does not influence function, so it would not cause disability in any way, but patients may have numbness in the thigh,” Hamilton, who is an Orthopedics Today Editorial Board Member, said. “That is typically transient, meaning it will go away over time, but there will be a small percentage of patients who may complain of permanent thigh numbness.”

As the use of the direct anterior approach in THA gained popularity in the mid-2000s, Hamilton noted industry-led educational programs related to the technique developed, allowing more surgeons to learn to perform the direct anterior approach. Hamilton believes these educational programs have improved over time and innovation in industry has helped, as well. He said technological advancements have included “the development of special instruments, techniques and implants. Also, other modalities have been developed to improve accuracy of implant positioning and equalizing leg lengths.”

“All these techniques, have evolved over time, making it easier for us to teach the technique,” Hamilton told Orthopedics Today.

Despite the advancements that have been made regarding the direct anterior approach, Taunton said long-term outcomes about this THA approach are needed.

Currently, one focus is on whether a specific prosthetic design may help surgeons perform the direct anterior approach, according to Hozack.

Hamilton believes the advent of the American Joint Replacement Registry provides an opportunity to use large data to objectively evaluate the direct anterior THA approach.

“Much of the data that we have had so far have been smaller datasets from single institutions, sometimes from surgeon experts, sometimes from surgeon detractors, and that leads to significant bias in the data,” Hamilton said. “I think that as the American Joint Replacement Registry matures, we will be able to get a more accurate measure of outcomes [and] complication rates, as well as learn the relative value of these approaches.”

Despite limited data on the direct anterior approach, some surgeons and hospitals have begun to market it as a way to achieve better results, a tactic that Lawrence D. Dorr, MD, said has been bad for THA and for physician/patient relationships.

“When the data show there is not any difference, then it is unfair to patients, it is unfair to our profession and it is unfair to society to go out and brag that one way is better than another way,” Dorr, of Dorr Institute for Research and Education, told Orthopedics Today.

Hamilton believes patient demand for the direct anterior approach would be high regardless of whether the approach was marketed to patients.

“[Patient] demand has been the driving force behind the growth of this approach over the last 15 years. There have been surgeons who have marketed the approach using the internet, but there have been innumerable fads marketed by surgeons in recent years. Those that stand the test of time do so as patient testimony spreads and the thousands of patients who have had the approach tell their friends and community how well they did,” he said. “If there really was no difference or if the complication rate was as bad as the detractors say, this [approach] would have died years ago. Instead, it continues to grow every year.”

Dorr noted it is rare for surgeons to be able to switch between approaches, so it is important for orthopedic surgery residents and fellows to be exposed to both direct anterior and posterior approaches during their training program. This kind of exposure lets them decide which approach works best for them.

In the literature, the reported learning curve for the direct anterior approach involves the first 50 to 100 patients, according to Meneghini.

Hozack noted residents and fellows master the anterior approach in the same amount of time as they do other approaches.

“I do not see [the direct anterior approach being] inherently more difficult to teach nor more difficult to learn,” he said. “You need to have proper supervision, just like the posterior approach. If you are not supervised in how to do it properly, there is a higher risk of complications, such as nerve injuries, bone fractures and dislocations.” 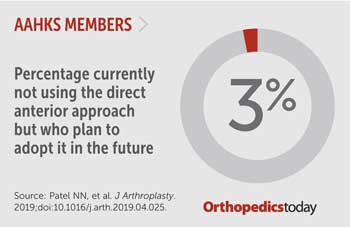 Before experienced surgeons switch to any new approach, he said they should evaluate their reasons for switching. Surgeons should not change approaches solely to obtain more patients because, in doing so, they could potentially increase their risk of complications, Hozack said.

Dorr said surgeons who encounter complications with one approach should not switch to a different THA approach as the solution.

“Established surgeons transitioning approaches in practice have to recognize there will be a learning curve, that their early cases will take a little longer, but that does not mean there has to be a higher complication rate,” Hamilton said. “Also, the fellows I have the opportunity to train over months at a time have a much easier time adopting the approach than I did trying to learn it myself.”

Use what you know

Although experienced surgeons should be familiar with more than one THA approach, Hamilton said it is best to use one approach most of the time because it improves surgical quality and efficiency.

Instead of focusing on the THA approach, Dorr said surgeons should focus on providing the best outcome for their patients.

, “When would the direct anterior approach for THA be contraindicated?”