Standards needed for orthobiologic use in fractures

Some factors related to the patient or surgery, including inadequate blood flow and fracture stability, can result in fracture nonunion. However, literature shows most of these traumatic fractures promptly heal after surgical treatment. For those that do not, sources told Orthopedics Today the use of orthobiologics may provide a needed boost in healing.

“We do not use [orthobiologics] routinely initially, but perhaps in selected cases their expense is warranted,” Michael D. McKee, MD, FRCSC, at the University of Arizona College of Medicine – Phoenix, told Orthopedics Today. “In delayed or nonunion cases, where we know that for whatever reason this is a fracture that has identified itself as one that will not heal or is going to take forever to heal, … we are on more solid ground justifying the use of an orthobiologic.”

Before orthopedic surgeons decide to use orthobiologics to treat fractures or nonunions, J. Tracy Watson, MD, of the CORE Institute, noted it is important for them “to have a good understanding of the indications of where these materials work the best and in what situations.”

Having a good framework regarding the different components of fracture healing may help surgeons identify which components each orthobiologic influences, Aaron Nauth, MD, MSc, FRCSC, said.

According to Watson, alloplastic ceramic bone fillers that can mimic the cancellous bone architecture and lead to formation of native bone, have been widely used since the early to mid-1990s and have the most reliable track record for orthobiologics in trauma applications. Calcium phosphate bone void filler and calcium sulfate materials — two types of alloplastic ceramic bone void fillers — can be used to elevate and maintain the reduction of depressed articular surfaces in tibial plateau fractures, distal tibial pilon fractures or distal radius fractures, he said.

In a patient with impaired biology or a high chance of nonunion, use of a calcium phosphate substance or a phosphate/sulfate mix at the time of wound closure can promote fracture healing, Paul Tornetta III, MD, professor and chair at Boston University Medical Center, said.

According to McKee, surgeons usually add calcium phosphate products during any secondary procedure for an already established nonunion.

In the mid to late 1990s, researchers began to explore the effect on recombinant human bone morphogenetic protein-2 in orthopedic trauma. An osteoinductive bone stimulating agent, INFUSE (Medtronic) rhBMP-2 is FDA approved for the treatment of acute open tibia fractures. It is often used off-label during treatment of nonunions, according to Watson. 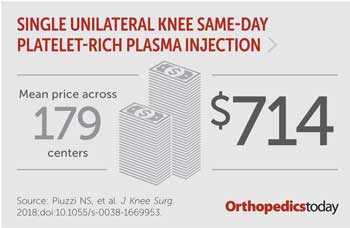 “Simultaneously, with the advent and the usage of the bone morphogenetic proteins, many other non-specific growth factors have come online, as well, in terms of using platelet-derived growth factor, fibroblastic growth factor, [and] a whole host of endogenous growth factors that tend to facilitate cellular function and jumpstart the ability to form bone,” Watson said.

Nauth said he uses both BMPs and platelet-derived growth factors either in combination with an autograft or allograft bone when there is a bone defect or when additional biology is needed to stimulate bone healing in a nonunion.

Demineralized bone matrix (DBM) is another widely used orthobiologic product, according to Watson, which presents a large surface area to facilitate healing and cellular attachment.

“In theory, [demineralized bone matrix] has a tremendous amount of endogenous growth factors, so you are getting the biggest bang for your buck,” Watson, an Orthopedics Today Editorial Board Member, said.

“[These] cells rely on great host biology and if you are injecting it into a biologically dormant location, which is what most nonunions are, I do not see how they are going to have great success,” Watson said.

Instead, most surgeons use a bone marrow aspirate composite (BMAC) bone graft plus a conductive substrate, such as DBM, or a calcium phosphate carrier in the same way they would use normal bone graft, he said. “[Surgeons] resect the nonunion in order to get down to the healthy bleeding bone and then, instead of implanting autogenous iliac crest bone graft, [they] use this composite graft as [their] bone graft.”

Orthobiologics are not standalone products. “They are complements to what we typically do,” McKee said.

For a fracture to heal, Tornetta said surgeons need a combination of biology and stability. A rod or plate and screws are used for stability whereas a patient’s cells or a biologic stimulus are used for the biological aspects of healing, he said.

Watson noted fracture fixation implants and biologics have become more sophisticated in that these not only allow patients to “walk where they could not walk before,” but to heal, as well.

“We have phenomenal biomechanics in our contemporary implants that allow us to provide incredible stability to these difficult traumatic injuries,” Watson said. “At the same time, we have a number of biologic tools to drill down and get back to the basic biology of fracture healing. We hope we can recapitulate fracture healing in the worst circumstances using some of these adjuvants.”

If the surgeon believes a patient may benefit from the inclusion of an orthobiologic in his or her treatment regimen, the patient should be informed and included in decision-making regarding whether it is ultimately used, Tornetta said.

“I include the patient in those discussions … because patients frequently have an opinion about what they want,” he said. “It is within the realm of what treatments are reasonable, [and] it is appropriate to have [patients] involved with that decision-making. It should not be just [the surgeon].”

Nauth said, because healthier, younger patients typically experience better bone healing with and have a better response to orthobiologics, surgeons are more likely to use orthobiologics in patients with the kind of health problems that compromise bone healing.

“When you have a completely healthy 25-year-old, most of the time they are going to heal their bone and you will not need to use anything too fancy unless they have a big bone defect because of the trauma,” he told Orthopedics Today. “But it is the older, less healthy patients who often need that super-charged bone healing to try to get their bone to heal sometimes.”

However, according to Nauth, surgeons should avoid using orthobiologics in patients diagnosed with cancer or in patients with an active infection.

Watson said some growth factor orthobiologics should also be avoided in patients who are pregnant.

Tornetta said some orthobiologics should not be used in cases in which there is an area of soft tissue disruption between bone.

“If you [apply] an orthobiologic that is somewhat fluid, even if it is captured within a collagen sponge, you can end up with bone growing in an area you do not want it,” Tornetta said. “I would say any area where there is a fascia defect or muscle defect, and you do not want bone to form there, then a locally applied orthobiologic would be tough to contain. We could end up with a forearm synostosis or limitations in motion based on extra bone formation.”

Furthermore, it is unknown whether the individual biology of a patient may lead to more favorable or unfavorable responses to orthobiologics, according to Tornetta.

“There is some discussion in some of the journal literature around the ratio of T-cells … that may predispose to nonunion,” he said. “Would these same types of independent biologic factors herald a more positive response in an orthobiologic or demonstrate a negative response that would make it just expensive to use for little gain?”

Although surgeons may have an idea which trauma patients may benefit most from stimulated healing after surgery, McKee noted the “perfect” orthobiologic compound has not yet been identified nor has the right time to apply orthobiologics.

“We do know that applying [biological materials] immediately at the time of the surgery often does not work well because of the intensity of the inflammatory response to the fracture,” McKee said. “[While] it is often awkward to bring someone back and reoperate on them or inject this material 2 or 3 weeks after a fracture, that seems to be perhaps a better time.”

He said orthopedic surgeons and researchers are hoping to identify a compound that can decrease the time to healing when used early in the course of treatment of a problem fracture. Despite promising results seen with some animal and basic science models, this outcome has been difficult to elucidate in studies that involve humans, according to McKee.

“If we had something which consistently produced a higher union rate and a quicker time to union, that would be an ideal product,” McKee said. “It is controversial, and some people think we do have such things, but, in general, it has been difficult to prove that in good, high-quality prospective and/or randomized trials.”

Watson noted “there is no ‘magic pill’ or bone putty that will make [bone] heal” faster. He said the cells that are “turned on” by the particular biologic are stimulated to heal bone, but not at a rate that is faster than that of normal fracture healing. Instead, cells are programmed to heal at a constant rate.

“I do not think of [orthobiologics] as accelerating healing, more so that it increases the capacity to heal,” Nauth said. “It is used in that setting where you are having a difficult time of getting the bone to heal and the orthobiologics are used to increase the chances that it will heal as opposed to necessarily making it heal faster.”

As there is currently no “great definition for union,” orthobiologics are graded “less around how long it takes to gain union and more around whether or not it occurs,” Tornetta told Orthopedics Today.

Setting standards for orthobiologics may result in consistent data and terminology and it may more clearly identify the cases in which orthobiologics would be most beneficial, according to Watson.

He said standards that identify which orthobiologics are being used in comparative studies are also needed so that those studies can be accurately replicated.

“For example, the type of device that you are using to obtain the specific cellular concentration needs to be explained, what is the viability of these cells, how many of these cells survive, etc., rather than just saying we injected 30 mL of bone marrow concentrate and everybody healed,” Watson said. “That is what the research is now, so there is no way to know if I can replicate those results or not because you do not know what they did or how they did it.” – by Casey Tingle

Disclosures: Watson reports he is chair of the American Academy of Orthopaedic Surgeons Committee on Biologics and Regenerative Medicine. McKee, Nauth and Tornetta report no relevant financial disclosures.

, “Should orthobiologics be used in primary traumatic fracture cases?”