Total knee arthroplasty is a successful surgical procedure that relieves pain and restores function. However, TKA has not had the same reported patient satisfaction rates as total hip arthroplasty. Mechanical alignment was first described by John Insall in 1985 and has become the most common surgical approach for TKA, used worldwide by most surgeons. Mechanical alignment places the implant in an average position for all patients based on a predetermined definition of acceptable alignment and has been especially successful when coupled with posterior-stabilized devices. Most implant systems and instrumentation are optimized for use with mechanical alignment.

The articular surfaces are resurfaced by resecting an amount of bone, that, when cartilage loss and kerf of the saw blade are included, equals the thickness of the implant. Recording the caliper measurements on a verification worksheet during the procedure confirms proper positioning of the components before cementing (Figure 1). Decision trees are used to aid balancing with either PCL-retaining or PCL-substituting medially stabilized devices. 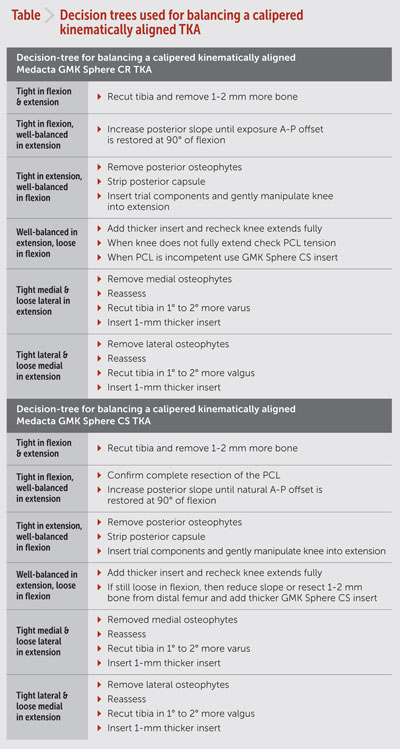 Measure the offset of the distal femoral medial condyle to the anterior tibia with the knee in 90º flexion. This step is used when preserving the PCL, and quality assurance (QA) check #1: Reference this measurement during trialing.

Set the flexion-extension orientation of the femoral component by starting the drill hole for the positioning rod midway between the top of the intercondylar notch and the anterior cortex (Figure 2). QA check #2: Confirm there is a 5 mm to 10 mm bridge of bone between the posterior rim of the hole and the top of the intercondylar notch, which reduces the risk of flexing the femoral component and of patella instability.

Set the proximal-distal position and varus-valgus orientation of the femoral component by using an offset distal referencing guide with a 2-mm offset to compensate for complete cartilage loss (Figures 3 and 4). QA check #3: Measure the thickness of the medial and lateral distal femoral resections and confirm that when 2 mm are added for cartilage loss and 1 mm is added for the kerf of the saw blade, they are within 0 ± 0.5 mm of the thickness of the femoral implant.

Resect the proximal tibia using an extramedullary (EM) tibial resection guide (Figures 5 and 6), matching the anatomy in the coronal (Figure 7) and sagittal planes (Figure 8), compensating for cartilage loss, as well as any bone loss. Natural varus, which is present in many cases (Figure 9), and posterior tibial slope are restored (Figures 10-12).

QA check #5: Measure the thickness of the medial and lateral tibial condyles by referencing the base of the tibial spine in an area that has intact cartilage.

QA check #6: Insert the tightest fitting spacer block between the femur and tibia. Like the native knee, the extension space should have a rectangular shape with tight medial and lateral gaps and negligible varus-valgus laxity. The flexion space should be trapezoidal with a tighter medial gap and looser lateral gap. When the extension space is 1 mm to 2 mm loose on one side (medial or lateral), re-cut the tibia with a 1° to 2° valgus or varus re-cut guide following the logic outlined in the decision trees.

Visually size and position the anatomic tibial baseplate, selecting the size and adjusting rotation to best cover the bone surface without overhang. The position of the tibial tubercle (TT) with respect to the baseplate is irrelevant; use of a medially stabilized device allows for anatomic rotational freedom.

Insert trial components and assess varus-valgus laxities through full range of motion while referring to the corrective measures in the GMK Sphere CR and Sphere CS decision trees (Medacta). The anterior tibial offset measurement is used to adjust tibial slope and depth of resection as required in PCL-retaining cases; it is not used with PCL-sacrificing cases.

Note that the tibial mechanical axis, intramedullary canal and position of the TT are not referenced with kinematic alignment.