Pie-crusting technique seen as effective for releasing MCL during meniscectomy 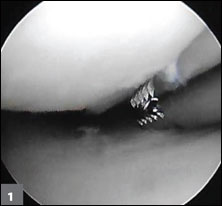 A tight medial compartment is shown when valgus stress is applied to the knee in a knee holder. 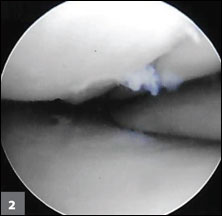 Scuffing of the medial femoral condylar articular surface can occur when attempting to reach the posterior horn of the meniscus during arthroscopy in a tight medial compartment.
Images: Bert JM

I have performed more than 15,000 knee arthroscopy procedures in the past 35 years. From performing that volume of cases, I learned that a more appropriate question for the orthopedic surgeon to answer is whether he or she is better off “forcing” a meniscal shaver into the joint and scraping off some of the femoral surface cartilage to make the compartment less tight or releasing the medial collateral ligament (MCL) to allow for easy passage of arthroscopic tools needed to remove torn meniscal tissue when performing meniscal resection or repair in the posterior compartment of the knee (Figure 2). As cartilage is aneural, alymphatic and avascular, it lacks the ability to heal and “articular cartilage lacks regenerative power,” as J. Leidy wrote in 1849. William Hunter wrote in 1743, cartilage, “when destroyed, is not recovered.”

Pie crusting is one option 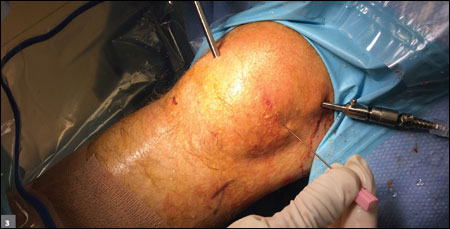 A patient with a tight medial knee compartment undergoes pie crusting of the MCL with an 18-gauge spinal needle.


In a 2016 article in Arthroscopy, I pointed out there are three possible techniques for releasing the MCL during an arthroscopic knee procedure. The “pie-crust” technique, which involves repetitive puncturing with a spinal needle, is the most common procedure performed among the three techniques. This is done using an 18-gauge needle and by making multiple puncture holes just proximal to the joint line (Figure 3). The pie-crusting technique allows for partial release of the MCL. During this procedure, the knee holder should be positioned no more than 2 inches to 3 inches above the superior pole of the patella and valgus stress should be placed on the lower leg while performing the “pie crusting” with the 18-gauge needle.

As the ligament begins to release, the surgeon will notice there is increased height in the medial joint space (Figure 4). During final clean-up with a 4-mm shaver, the ample space in which the posterior horn remnant of the medial meniscus can be debrided is evident (Figure 5).

Other techniques used to help resolve the problem of a tight medial compartment include releasing the MCL with a hook-type electrocautery just proximal to the medial meniscus or using a microfracture pick to release the menisco-capsular junction inferior to the meniscus. In The Knee in 2016, Claret and colleagues reviewed 140 patients: 70 patients had an MCL release using the pie-crust release technique and 70 patients did not have the release. They reviewed the patients at 2 months and 6 months postoperatively. Interestingly, the patients with a partial MCL release had decreased pain at rest at 2 months and decreased pain during physical activity at 6 months. There was no need for postoperative bracing and no damage was done to the articular cartilage in the group that underwent a release.

A similar study by Park and colleagues in Knee Surgery, Sports Traumatology, Arthroscopy in 2011 showed no complications associated with this release procedure and no damage occurred to the articular surfaces in the medial compartment. The patients in this study also did not use postoperative bracing. In a study of total knee arthroplasty by Ha and colleagues in the Journal of Arthroplasty in 2016, partial MCL release was done at the time of surgery to produce balancing of a tight medial compartment in extension, which resulted in no complications.

Therefore, the bottom line is do not be afraid to release the MCL during arthroscopic knee surgery in a patient who has a tight medial compartment. As cartilage cannot heal, it is more important to preserve the articular surface and avoid any insult to the cartilage, than it is to release the MCL. The MCL will heal uneventfully within 3 weeks to 6 weeks.