Since 1995, EFORT organizes two travelling fellowships per year: one in the spring and one in the fall. Each national association can nominate one candidate at the end of his or her orthopaedic training. There is a maximum of 14 candidates and this year and I was fortunate enough to be one of these candidates.

As the destination was Finland (or Suomi as I later learned) I was extra motivated because Finland is famed for its educational system. Despite not being a big country, it is able to produce high-quality research with great clinical implications. I was anxious to find out how they were doing this.

After a comfortable 2.5-hour flight, I landed in Helsinki-Vantaa. As it was 2° outside, I immediately regretted not bringing my winter jacket. Half an hour later, I arrived by train at the centre of Helsinki. The hotel could be spotted from the train station. I had time for a quick site-seeing walk through Helsinki to see the Helsingrin Tuomiokirkko (Helsinki Cathedral) and the Temppeliaukio Church.

In the evening, we were welcomed by Professor Ilkka Kiviranta and Doctor Tim Söderlund. Here, I met the other participants from all over Europe — Latvia, Macedonia, Malta, Poland, Portugal, Romania, Serbia, Sweden Switzerland, Turkey and Ukraine. After a short introduction and a recap of the exciting program, we walked to a restaurant and were treated to dinner. Together, we made sure there was one less reindeer in Lapland.

Early in the morning, we were greeted in the hotel lobby by Lauri, a local resident who looked like he could hammer a prosthesis in by hand (and probably did). Lauri took the entire group by train to the Peijas Hospital. This hospital is part of the Helsinki University Hospital and located just outside of Helsinki. More than 3,000 cases of primary and revision arthroplasty are performed in Peijas each year. The center also operates elective foot and ankle surgeries and minor trauma cases.

Our day was coordinated by Teemu Helkamaa and consisted of lectures on possible complications of arthroplasty and surgery. Teemu made sure we could each attend one of the six orthopaedic ORs. Both primary and revision cases could be seen live, and we were allowed to scrub in. In between, there was a warm lunch in the cafeteria. During lunch and between lectures, there were lively discussions among the fellows about the differences of orthopaedic care among European countries.

In the afternoon, Sandrine (Switzerland), Christian (Sweden), Jakub (Poland) and Colin (Malta) held a presentation about their respective countries and its orthopaedic care and curriculum. This was followed by a great sushi dinner in Helsinki.

We travelled by train to Tampere, which is 175 kilometers North of Helsinki. At the station, we were welcomed by the head of the department, Dr. Minna Laitinen, who guided us to the Tampere University Hospital. We had a full day of lectures about evidence-based medicine (EBM) of the upper extremity and how to pursue this. A discussion about the role of psychological effects on the outcome of treatment was insightful. This was coordinated by Ville Mattila, the enthusiastic young professor of Tampere University Hospital. We conceded that important clinical-decision altering evidence about fracture treatment was still lacking. Local researchers, Minna Laitinen and Ville Mattila presented their solution for tackling this problem.

With international collaboration of Sweden, they are achieving randomized control trials (RCTs) with adequate numbers of patients. Hopefully, these will guide us further. The amount of adherence to changed guidelines was promising. After a new EBM guideline showing no benefit effect of arthroscopic debridement of degenerative meniscal tears, a noticeable decline was seen in this procedure in Finland. The free-of-charge health care system in Finland and that operative treatment is included in the payroll are thought to make this possible. Apparently, the Nordic countries are great at performing RCTs, as well as implementing the EBM results these studies offer. 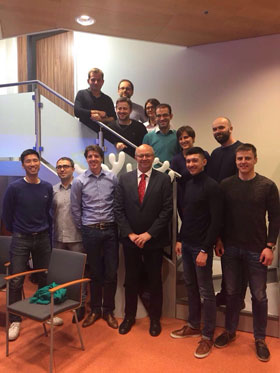 Paviel (Ukraine), Giedrius (Latvia), Filipe (Portugal) and I (The Netherlands) held a presentation about our countries and health care systems. This was followed by a research meeting at the Tampere Institute, with a discussion about the role of teaching in an orthopaedic curriculum and a scientific career. In the meantime, it stopped snowing and we hiked to the Kaupinojan sauna. We were treated to a hot sauna and took a dive in the ice-cold water. After a few hours of this in combination with dinner, beer and gin, we headed to our hotel again. Fortunately, the next day program left room for exploration of the surprisingly lively nightlife of Tampere, despite it being a Tuesday.

After a late start, we were pleasantly surprised by the presence of Per Kjaersgaard-Andersen, MD, president-elect of EFORT. Although I knew EFORT did more than organizing a congress each year, I was unaware it already represented 40 national societies and have more than 35,000 individual members. It was exciting to hear the direction EFORT is heading, the increasing role of the EBOT and the European Orthopaedic Curriculum.

Although we were still in Tampere and only 100 meters from Tampere University Hospital, we had our meetings in a different hospital. The Coxa Hospital for Joint Replacement is a hospital with public stockholders. This started as a test and has grown to be a successful concept. With 3,700 joint replacements last year and growing, it is one of the biggest orthopaedic arthroplasty clinics in Europe. We were welcomed by Jorma Pajamäki and treated to lectures about problems of, and solutions to, arthroplasty failures. In the afternoon, we were given an insight in the concept of Coxa and given a grand tour by Jyrki Nieminen. The physicians strive to be good at not only the technical aspect of arthroplasty, but also the patient experience around the operation.

Due to the stockholders, the center has the economic freedom and independence to make alterations in the hospital to achieve this. Apparently, it is succeeding. With the adherence to Tampere University Hospital, physicians also seem to be able to assure good medical care if non-arthroplasty complications occur.

Dragos (Romania), Ivana (Serbia), Kire (Macedonia) and Bedri (Turkey) were the last of the fellows to present their respective countries. After this, it was an early dinner, straight to the train station and Helsinki.

We were back in Helsinki for the last 2 days of the traveling fellowship, which were spent in the Töölo Hospital, which is a part of the Helsinki University Hospital. This hospital in the middle of Helsinki takes care of most of the musculoskeletal trauma in Helsinki. Only penetrating trauma is brought elsewhere. To get an idea of the workload, the hospital has 450 major trauma cases each year and roughly 500 ankle fractures. To be able to treat all these acute patients, it runs three trauma ORs. Two trauma ORs are run until 10 p.m. and after this, there is one OR team in the hospital and one on-call.

Arthroplasty of the upper extremity is available at the Töölo hospital, but patients with a proximal femur fracture requiring total hip arthroplasty are referred to Peijas hospital. In the morning, we started with lectures and research presentations. We listened to the indications of a total elbow arthroplasty after a distal humerus fracture and had a discussion about one of their “worst case” patients. After two interactive sessions about elbow and knee dislocations, we went to the OR for the rest of the day. We divided the cases amongst ourselves and had the opportunity to scrub in or watch several orthopaedic trauma cases. With six running trauma programs, there was plenty of choice. We were free to join the ongoing operations in the evening as well.

The rest of the evening we spent in Helsinki. First dinner with drinks and afterward, of course, a sauna.

We started early to witness a trauma exercise. The goal of these exercises is to minimize the time between the emergency room and the incision of an operation is needed. The mannequin was actually filled with pig blood and it was impressive to see how efficient and quiet the entire team was while working.

The rest of the morning went by with lectures about trauma registers, open reduction and internal fixation in flail chest and the management and sequelae of acetabular fractures. Then, we were again invited to join the ongoing trauma operations. 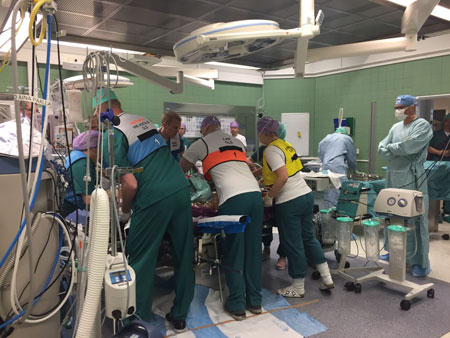 Disclosure for EFORT Travelling Fellowship Reports: The author reserves the right not to be responsible for the topicality, correctness, completeness or quality of the information provided. Liability claims regarding damage caused by the use of any information provided, including any kind of information which is incomplete or incorrect, will therefore be rejected.