A 77-year-old woman, who was found down at her home, was brought to the hospital by ambulance. Her mental status was altered. The patient’s medical history was significant for chronic obstructive pulmonary disease, oxygen at home (2L nasal cannula) and type 2 diabetes mellitus. She was underweight (BMI 17.2), and was taking opioids for chronic low back pain. Seven months earlier, the patient had fallen and reportedly had a right hip fracture at the time. She had been recovering well as a household ambulator who used a walker, but she continued to have baseline pain that was mostly associated with her back.

At admission, the patient’s labs were significant for a peripheral white blood cell count of 13.3 x 109/L with 85.7% neutrophils, lactic acid of 1.6 mmol/L (normal, 0.2 to 2.2 mmol/L), C-reactive protein of 61.7 mg/L (normal 0 mg/L to 10 mg/L), erythrocyte sedimentation rate of 51 mm/h (normal, 0 mm/h to 30 mm/h), hemoglobin of 12.3 g/dL and glucose of 241 mg/dL. A CT scan of the abdomen and pelvis with IV contrast showed mild thickening of the distal sigmoid colon, which possibly represents early colitis, as well as a previous right basicervical femoral neck fracture with bone resorption and an enhancing joint effusion (Figure 1).

The patient presented to the hospital 7 months earlier with a ground-level fall after a new onset seizure. She underwent an extensive workup for new-onset seizure and was diagnosed with likely opioid withdrawal and required no further seizure treatment or medications. Musculoskeletal imaging revealed a right basicervical femoral neck fracture, greater trochanteric avulsion fracture, and an associated acetabular fracture (Figures 2 and 3). The patient was a poor surgical candidate due to her medical comorbidities, most notably her chronic obstructive pulmonary disease (COPD), which required she be on continuous oxygen. 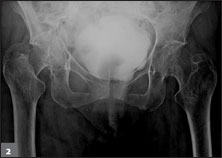 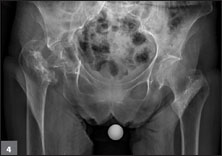 This AP pelvis radiograph shows further bone resorption of the base of the femoral neck fracture with essentially development of a Girdlestone. There has been interval callus formation and healing of the acetabulum, but no further medialization of the femoral head.

In another patient with a similar original fracture pattern, combined ORIF with THA was highly successful in the appropriate setting.

At her current admission, the patient was alert and oriented, with full capacity to make her own medical decisions. Using shared decision making, a discussion was begun with her and her family regarding management options. The operative and nonoperative options were as follows:

The risks and benefits of each treatment option were discussed, including the high perioperative morbidity and mortality associated with the patient’s physiologic status. Given the extent and complexity of surgery, including estimated blood loss, risk of infection and poor bone support with severe osteopenia, the patient and her family elected to attempt nonoperative management with the option to pursue surgery later if she encountered too much difficulty in her overall recovery.

The patient was treated so she could perform touch-down weight-bearing on her right leg and was encouraged to mobilize out of bed with physical therapy and ambulate, as tolerated, using a walker. Serial anteroposterior (AP) pelvis radiographs were obtained at periodic clinic visits to monitor for any significant fracture displacement.

The patient presented 7 months after the initial encounter with signs of altered mental status and possible sepsis. She did not complain of increased hip pain. A new CT scan (Figure 1) showed an enhancing joint effusion with bone resorption and elevated inflammatory markers. The differential diagnosis at that time included septic hip, osteomyelitis, possibly progressive pathology undiagnosed at initial encounter or normal sequela of a complex hip fracture. The patient underwent interventional radiology-guided aspiration of her right hip, which showed 40 nucleated cells and 6% neutrophils, negative crystals and negative gram stain, which supported the argument against the possibility of infection. The cultures were negative throughout her hospital stay.

A systemic infection work-up was positive for pneumonia and her clinical status improved with antibiotics and supportive care. However, the question still remained regarding the enhancing joint effusion and hypertrophic tissue thickening in the region of the hip. The ultimate conclusion in consultation with radiology was that this likely was progression of a displaced femoral neck fracture, which now acted as a resection arthroplasty.

At 1-year follow-up, the patient is a household ambulator who uses a walker. She is weight-bearing as tolerated with no hip restrictions. On examination, her right leg is 1 inch shorter than her contralateral leg and has she minimal pain with internal and external rotation of the hip. Imaging shows progressive resorption of the femoral head (Figure 4). Functionally, the patient’s baseline was improving. She reached a Harris Hip Score of 57 after a score of 11 obtained 1 year ago. The patient remained at full mental capacity, was satisfied with her status and was not interested in pursuing any surgical interventions.

The presented geriatric patient suffered a combined basicervical femoral neck and acetabular fracture from a seizure and ground level fall. Combined femoral neck and acetabular fractures are often due to high-energy mechanisms and are quite rare. They occur in 1.2% to 3.7% of acetabular fractures. These injuries have a poor prognosis with primary ORIF due to a high incidence of avascular necrosis and post-traumatic arthritis. Some have advocated that geriatric patients with this injury should be treated with combined ORIF and acute THA (Figure 5). Discussion of treatment options with this patient and her family included nonoperative treatment, combined ORIF and THA and delayed THA. The patient had significant medical comorbidities, including an acute COPD exacerbation. Therefore, nonoperative treatment was selected.

There is no reported literature on the nonoperative treatment of combined femoral neck and acetabular fracture. We relied on the principles outlined in the nonoperative treatment of isolated acetabular fractures and femoral neck fractures with the goal of early mobilization and pain control to prevent complications from immobilization, such as pneumonia, aspiration and decubitus ulcers. Ultimately, in the right patient and setting, nonoperative treatment of femoral neck and acetabular fractures can be a safe approach that still produces acceptable functional outcomes. If this patient experiences hip pain in the future, she would be a candidate for THA, likely after repeated inflammatory markers are obtained to ensure any elevation in the markers were indeed related to her presenting with pneumonia and not due to any hip pathology.