The suture endobutton group had a smaller difference in maximal dorsiflexion between the injured, noninjured side at follow-up.

NATIONAL HARBOR, Md., USA — Use of a suture endobutton for the treatment of acute syndesmotic injuries provided better anatomical restoration and clinical outcomes in patients younger than 70 years compared with the use of one quadricortical screw, according to a presenter at the Orthopaedic Trauma Association Annual Meeting, here.

“Our reports support the trends from earlier published studies. To sum it up, patients treated with suture endobutton have better outcome scores, better range of motion, earlier mobilization and better radiographic results at 1 year compared with patients treated with one quadricortical screw,” Mette R. Andersen, MD, said at the meeting.

Andersen and colleagues randomized 97 patients with syndesmotic injuries between the ages of 18 years and 70 years into two groups. The suture endobutton (SE) group included 48 patients, and the quadricortical syndesmotic screw (SS) group included 49 patients. Both groups were similar in gender, age and BMI.

“The aim of the study was to compare the dynamic SE and the syndesmotic screw in the treatment of acute syndesmotic injuries,” Andersen said.

All patients had their fractures treated according to AO principles with open reduction and internal fixation. Researchers used the TightRope (Arthrex) suture endobutton, and the syndesmotic screw used was a fully threaded self-tapping 4.5-mm quadricortical screw.

This axial CT scan 1 cm proximal to the tibial plafond shows increased syndesmosis width in the operated ankle compared to the nonoperated ankle. 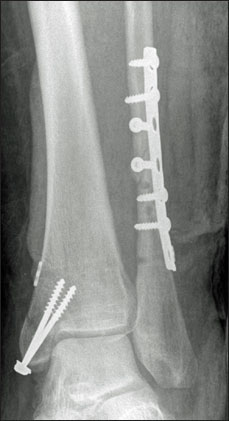 A patient is shown with a type 44-C OTA/AO ankle fracture that was treated with open reduction internal fixation and suture endobutton.

According to Andersen, there were limitations to this study. They were the fact the investigators were not blinded and a higher number of patients with concomitant posterior malleolar fractures in the quadricortical group; although sub-analyses have been done, which produced essentially the same results.

“One-year follow-up is too short to predict degenerative changes, and longer follow-up is thereby necessary,” Andersen said. “Keep in mind that this was a population below 70 years of age. As far as we know, the use of a suture endobutton in elderly patients with osteoporosis has not been done.” – by Nhu Te