An important stabilizer in the knee, the ACL is estimated to have between 100,000 and 200,000 injuries annually throughout the United States. Deficiency of the ACL often causes instability and can create a “giving way” feeling in patients.

Many different treatment options for ACL deficiency have been proposed. The first treatment of an ACL injury was described in 1903 by Mayo Robson when he repaired both cruciate ligaments onto the femoral wall. In the first half of the 1900s, the technique of open primary ACL repair was further developed, albeit with unpredictable results. A 1976 study by Feagin and Curl changed the perspective on open primary ACL repair when they reported encouraging early results. However, when they reported their 5-year follow-up results of acute ACL repair in 32 military cadets, they found re-ruptures in 17 patients (53%) and high rates of persistent symptoms, such as pain (71%), swelling (66%), stiffness (71%) and instability (94%). Other studies echoed these poor mid-term findings, and ACL repair was abandoned as a standard treatment. Attention subsequently shifted to ACL reconstruction, which evolved to become the modern day standard of care.

In looking at the historical literature, it could be argued primary repair of the ACL was prematurely discarded. A possible explanation for the unpredictable results was suggested by Sherman and his colleagues described then as the landmark study on ACL repair. In 1991, they reported the results of open primary ACL repair in 50 patients and uniquely performed an extensive subgroup analysis. While some subgroups showed better results in this study, other subgroups did significantly worse. The suggestion that emerged from Sherman was primary ACL repair might be more effective in a certain subset of patients who had proximal “peel-off” ACL tears, often seen in skiers, and good-to-excellent ACL tissue quality. Interestingly, Weaver and his colleagues already showed this in 1985 when they noted that in patients with ACL tears from skiing injuries, functional outcomes appeared to be better in patients with proximal tears than those with midsubstance tears. In addition, Genelin and his colleagues reported their mid-term outcomes of primary repair in 49 patients with proximal ACL tears in 1993. Although they reported significantly better results when compared to the studies that did not differentiate by tear type, the attention of most surgeons had already shifted from ACL repair to ACL reconstruction.

The aforementioned studies showed fairly good results could be achieved in the select group of patients with proximal ACL tears. It should be kept in mind these results were achieved using a morbid, open approach with a historic postoperative rehabilitation approach consisting of lower leg cast treatment for 6 weeks. Currently, advanced imaging (MRI), modern day minimally invasive arthroscopic surgery and up-to-date rehabilitation techniques are available and thus better results can be expected. For example, a recent publication detailed the first case series of arthroscopic primary repair of proximal ACL tears and showed excellent results.

In this article, we describe the approach of arthroscopic suture anchor primary ACL repair for use in patients with proximal tears. The goal of ACL repair is preservation of the native ACL tissues to maintain the proprioceptive function, blood supply and native kinematics of the knee when performed in the acute setting. Moreover, this is a conservative technique in that no bridges are burned if a formal ACL reconstruction becomes necessary in the future.

The patient is placed in supine position so the knee can be moved freely through its range of motion (ROM). The operative leg is prepped and draped in standard fashion, and standard knee and shoulder arthroscopy equipment and implants are used. Standard anteromedial and anterolateral portals are created, and a general inspection of the knee is performed. During arthroscopy, the location of the tear type, the quality of the ligamentous tissue and the eligibility of a repair are assessed using a probe (Figure 1). Next, a Passport cannula (Arthrex) is placed in the anteromedial portal to facilitate suture passage, management and repair of the ACL.

Sutures are initially passed through the anteromedial bundle using the Scorpion Suture Passer (Arthrex) with a size 2 FiberWire suture (Arthrex). Suturing starts at the intact distal end of the ligament (Figure 2) and is advanced with three to four passes in an alternating, interlocking Bunnell-type pattern toward the avulsed proximal end of the ligament with care taken to have the final suture passes exit toward the femur. The same process is repeated for the posterolateral bundle of the ACL remnant with a size 2 TigerWire suture (Arthrex). It is important to assess tissue resistance with each pass to prevent perforation of a previous stitch. After suturing both bundles, the sutures are guided outside the knee using an accessory stab incision just above the medial portal. The ligament then can be retracted away using this portal in order to create optimal visibility of the femoral footprint (Figure 3). Using a shaver or burr, the femoral footprint is roughened to allow bleeding and the subsequent local healing response. With the knee in flexion, an accessory inferomedial portal is created under direct visualization. 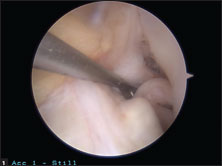 An arthroscopic view of the left knee is shown. With a probe, the ACL is moved away from the femoral wall and the tissue quality and exact location of the proximal ACL tear can be assessed. 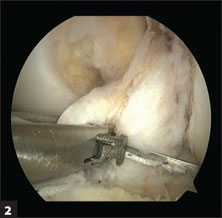 Using the Scorpion Suture Passer, the initial pass through the distal end of the ligament is made. Progressive passes continue proximally in an alternating, interlocking Bunnell-type pattern toward the avulsed proximal end. 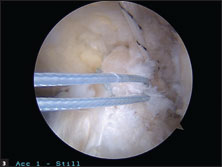 The FiberWire and TigerWire sutures have been deployed in locking fashion in both bundles of the ACL. The sutures are passed out an accessory medial portal (not shown), and applied traction enables good visualization of the femoral origin of the ACL. 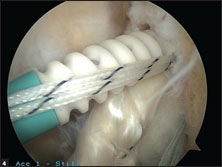 One of the two Swivelocks is deployed into femoral origin of the ACL to retension the remnant back to the bone.

Depending on bone quality, a 4.5 x 20-mm hole is drilled, punched or tapped in the femoral wall at the origin of the anteromedial bundle while the knee is in 90° of flexion. The FiberWire sutures are retrieved outside the knee through the accessory portal and passed through a 4.75-mm Vented BioComposite SwiveLock suture anchor (Arthrex). The knee is then flexed to create optimal visibility of the femoral footprint and the suture anchor is deployed into the hole while the ACL remnant is tensioned to the femoral wall (Figure 4). With the knee flexed at 110°, the same procedure is performed for the posterolateral bundle with a second suture anchor. The drill hole and suture anchor are placed into the origin of the posterolateral bundle within the femoral footprint.

Once the anchors are fully deployed and flush with the femoral footprint, the free ends of the repair sutures are cut and the repair is complete (Figure 5). The remnant can then be tested for tension and stiffness using a probe, and the knee can be cycled through full ROM to ensure the position is anatomic and there is no graft impingement. Finally, a Lachman test can be performed to confirm there is minimal anteroposterior translation.

This technique has been slightly modified over time to include a reinforcement stitch placed along the ligament to protect the repair. With the modified technique, the anchor placed in the anteromedial bundle footprint is preloaded with FiberTape (Arthrex). A standard ACL tibial guide is used to localize a tibial tunnel drilled with a 2.4-mm drill bit into the center of the ACL tibial footprint. A nitinol passing wire is then passed and used to shuttle the FiberTape down through the ACL and out the tibial drill hole. At this point, the knee is cycled and the FiberTape is tensioned and fixed to the tibia using a 4.75-mm Vented BioComposite SwiveLock suture anchor (Arthrex).

To prevent stiffness, which was frequently reported in the historical literature, the primary goals of rehabilitation are to minimize swelling and regain early ROM. During the first weeks, a brace is worn and weight-bearing is allowed as tolerated. The brace is locked in extension until volitional control of the quadriceps muscles is regained, at which point the brace is unlocked for ambulation. In the first few days, ROM exercises and isometrics are initiated but formal physical therapy does not have to start until after 1 month. After 4 weeks to 6 weeks, gentle strengthening is advanced and the patient starts the standard accelerated ACL rehabilitation protocol. Because of the minimally invasive nature of the surgery, the progress within the rehabilitation tends to be significantly faster than with formal ACL reconstruction.

Although the concept of ACL repair is somewhat controversial within the historic literature, it has been our experience that when performed as described on a carefully indicated subset of patients, excellent results can be achieved. To date, we have performed the procedure on more than 60 patients with results out to 7 years follow-up. Patient recovery tends to be dramatically expedited compared to reconstruction, and on the rare occasion failure occurs, ACL reconstruction can be performed as if it was the primary surgery.