For patients who have failed initial attempts at nonoperative treatment, i.e., physical therapy, bracing, etc., surgical management with an open modified Broström reconstruction is a well-accepted technique with good to excellent outcomes. However, recurrent instability is reported after acute re-injury and chronic attritional wear of the repaired anterior talofibular ligament (ATFL) at rates as high as 16% in one long-term outcome study by Maffulli and colleagues. In addition, traditional rehabilitation after open modified Broström reconstruction is lengthy, which for competitive athletes, laborers or active individuals, can be costly with regard to time away from sport, work or a demanding lifestyle.

A novel surgical technique is described in this article using an Arthrex internal brace to augment ligament repair in open modified Broström reconstruction. The device is a knotless, suture anchor-based system that can increase the ligament repair construct strength to 250 N, which is 1.6-times greater than the native ATFL (154 N) and 3.7-times greater than the traditional Broström repair (68 N). The increased construct strength allows the surgeon to consider implementation of an accelerated rehabilitation program, earlier return to desired activity and decreased recurrent instability noticed by the authors in early findings.

We begin the procedure with a standard ankle arthroscopy to identify and treat intra-articular pathology. This is done expeditiously and with lower pump pressure (30 mm Hg to 40 mm Hg) to avoid fluid extravasation in the ankle that could potentially make dissection of the lateral soft tissues during the open modified Broström procedure more difficult. 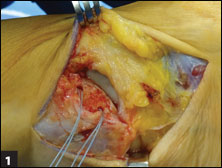 The ATFL cuff has been dissected with suture anchors placed in fibula for typical modified Broström repair. 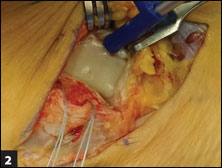 This image demonstrates the appropriate drilling trajectory (cephalad and medial) for suture anchor placement at the ATFL talar attachment site just off of the articular surface of the lateral ridge of the talus.

A linear incision across the distal fibula, approximately 1 cm proximal from the most distal end, in line with the orientation of the anterior talofibular ligament, is made to access the ATFL fibular and talar attachments and the peroneal tendons. Sharp dissection is carried through the skin and subcutaneous tissue down to the inferior extensor retinaculum and lateral ligament complex anteriorly. The fat pad in the anterolateral ankle is abundant in some patients and is partially excised for better visualization. The peroneal brevis and longus tendons are then identified in their sheaths as landmarks as they course distally from behind the lateral malleolus. Peroneal tendon pathologies, i.e., tenosynovitis or tears, are directly visualized and addressed during this procedure in conjuction with the ligament reconstruction. The skin incision can be extended in a curvilinear fashion proximally to adequately expose and treat larger peroneal tendon or superior retinacular tears. The ATFL is then identified and removed along with the surrounding periosteum and ankle joint capsule from its attachment on the anterior aspect of the distal fibula in a cuff or sleeve of tissue with the inferior extensor retinaculum (Figure 1). This cuff of tissue is mobilized to visualize the talar attachment just distal to the lateral articular ridge (Figure 2). The proximal attachment of the ATFL on the anterolateral aspect of the distal fibula is prepared by removing soft tissue with rongeur for later repair.

Next, the ATFL cuff is retracted distally to adequately expose its talar attachment on the non-articular side of the lateral ridge for placement of the 3.5-mm SwiveLock biocomposite suture anchor (Arthrex). The 2.7-mm drill bit with provided guide sleeve is used to drill with an approximately 45° medial and cephalad trajectory for placement of the 3.5-mm anchor in the talar body (Figure 2). Appropriate adjustments of drill angle should be made to avoid violation of the tibiotalar or subtalar joints. The use of the 3.5-mm tap is recommended to the laser line to avoid compromising anchor fixation or anchor breakage during insertion in the dense bone of the talus. The 3.5-mm suture anchor is then inserted with the #2 FiberTape attached through a distal eyelet. As with any anchor or screw insertion, caution must be taken with insertion of the anchor in the same axis of the prepared hole to avoid device breakage or fixation strength compromise. The FiberTape is then passed with a free needle through the cuff of tissue to include the extensor retinaculum adjacent to the anchor, allowing the suture portion of the internal brace to lie extra-articularly (Figures 3 and 4).

Although any method may be utilized for the modified Broström, the authors prefer an open modified Broström procedure performed by placing two 2.4-mm BiosutureTak suture anchors (Arthrex) in the anterolateral aspect of the distal fibula allowing room for later placement of a central 4.75-mm SwiveLock. The needles attached to the 2-0 Fiberwire of the BiosutureTak anchors are then used to pass the sutures through the soft tissue cuff adjacent to where the FiberTape is passed from the articular side to the extra-articular side. Care is taken to keep the superior anchor’s sutures superior to the FiberTape, and the inferior anchor’s suture inferior as the needles are brought up through the cuff. Good spread of the suture limbs in the tissue should be achieved, approximately 10-mm to 15-mm apart. The ankle should then be reduced in the neutral position. The sutures from each BiosutureTak suture anchor are tied completing the modified Broström. 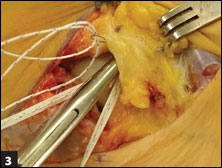 Using a free needle, the FiberTape suture is passed through the ATFL and extensor retinaculum cuff of tissue to ensure that the suture will lie extra-articularly. 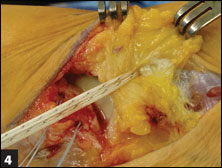 The suture is pulled through the cuff of tissue and laid over the fibula to determine the accurate placement of the suture anchor and ATFL cuff. 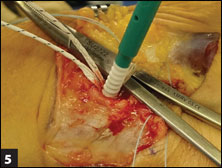 The second internal brace suture anchor is placed with the hemostat placed underneath the FiberTape to allow for slack in the system with the ankle in neutral position. 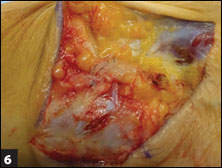 The completed repair is shown after excess FiberTape is cut and all sutures are tied.

Placement of the second anchor of the internal brace augmentation device is then determined carefully on the anterolateral aspect of the fibula. Caution must be taken to avoid penetration of the ankle joint or fracture of the fibula. The 3.4-mm drill bit is placed on the anterolateral fibula and angled in a cephalad trajectory to ensure appropriate placement of the internal brace suture anchor in bone. The drill hole is located between and superficial to the two BiosutureTak anchors. After appropriate drilling and tapping, the 4.75-mm SwiveLock is then inserted with the attached FiberTape. A medium-sized hemostat is placed between the FiberTape and the soft tissue sleeve to provide some slack or laxity in the repair system and with normal ankle inversion. The anchor is placed with the ankle held in a neutral position (Figure 5). This step is essential to avoid significant joint motion limitation and over-constraining the ankle joint. The excess FiberTape is cut, and an absorbable suture is typically used to repair the sleeve of tissue to the neighboring periosteum to bolster the repair (Figure 6). After a typical wound closure, a posterior splint is applied and worn until the first postoperative visit at approximately 7 days after the procedure.

Postoperatively, the patients are allowed full weight-bearing in a cam boot walker approximately 7 days after surgery at the time of their first postoperative visit. Ankle range of motion exercises are started at that point, avoiding inversion. At 4 weeks, the boot may be removed and the ankle placed in a lace-up brace and regular shoe. At that point, a formal physical therapy program is started. Initially, therapy focuses on ankle and foot edema control, passive/active range of motion, ankle strengthening and straight inline running during the first 2 weeks. At week 6, change of direction, jumping and sport-specific exercises are implemented. Unrestricted return to play as early as 8 weeks to 10 weeks postop can begin, but 12 weeks is recommended. Clearance goals are dependent on full pain-free range of motion, maintained ankle stability and normal gait.

In conclusion, the authors have found that augmentation of an open modified Broström ligament reconstruction with the internal brace is a safe and reproducible procedure with favorable results. A more rapid return to sports and work has been noticed without fracture or recurrent instability. Additional prospective studies are in process to appropriately support our findings.

Disclosures: Watson is a consultant for Arthrex, and receives no royalties for the internal brace and received no payment for this manuscript. Lamour reports no relevant financial disclosures.