China is the guest nation at this year’s American Association of Orthopaedic Surgeons Annual Meeting. Orthopedics Today and Robert D. D’Ambrosia, MD, spoke with Yingze Zhang, MD, president-elect of the Chinese Orthopaedic Association at Orthopedics Today Hawaii 2015. Through an interpreter, Dr. Zhang answered questions about differences in the delivery of orthopedic care between China, which has 140,000 orthopedic surgeons, and the United States; how the Chinese Orthopaedic Association meets the needs of the Chinese population; as well as Zhang’s novel surgical procedure for medial compartment osteoarthritis, which entails resecting a 2-cm section of the fibulae, and the Golden Key reduction device for femoral shaft fractures.

Orthopedics Today: How do you see the differences between China and the United States as far as the delivery of orthopedic care?

Yingze Zhang, MD: Different orthopedic specialties have different protocols for treatment in their particular specialty. In trauma, there are standardized protocols for treatment of each injury. On arrival at the hospital, they go to the emergency room, and the first surgeon does a physical examination. If the patient is in shock, resuscitation takes place first. If they are stable, the patient goes to radiology for an X-ray, especially if a fracture is suspected. If the patient has a fracture and can be stabilized with conservative treatment, the patient will be discharged immediately. If surgery is required, they will be admitted to the hospital. Following a physical examination, including lab tests and any other procedures required for surgical clearance, they will go to the OR, which is probably similar to your country. 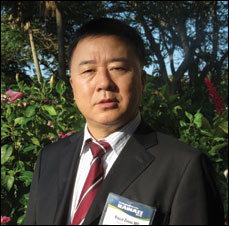 Yingze Zhang, MD, president-elect of the Chinese Orthopaedic Association, spoke with Orthopedics Today about differences in the delivery of orthopedic care between China and the United States.

Orthopedics Today: How long would a patient stay in the hospital if he or she had a fractured femur example?

Zhang: Generally about 1 week, preoperative and postoperative. It is longer than stays in an American hospital.

Robert D’Ambrosia, MD: Yes, a patient with a femur fracture would probably be admitted, get rodded within hours and be home the next day in the United States. You must have a lot of orthopedic beds in your hospital if they are staying for a week.

Zhang: In terms of fracture type, they are similar to the United States. Recently, we published a paper and found that fractures in the United States are more osteoporosis-related fractures compared with China. Since the Chinese society is growing and living longer, more osteoporosis-related elderly patients are now coming in for orthopedic surgery.

D’Ambrosia: Were they not before?

D’Ambrosia: Are the majority of pelvic injuries in younger patients because of the massive construction projects in China?

Zhang: Not only that, but there are more cars on the road in China. The number of family-owned vehicles has increased exponentially in the past 10 years. More car accidents equal more orthopedic injuries.

Orthopedics Today: How is the Chinese Orthopaedic Association (COA) dealing with the dramatic increase in orthopedic injuries?

Zhang: The Chinese government is cracking down on drunk driving, and trying to improve road safety. Second, they are placing many rules and regulations to increase the general population’s awareness of the problem and trying to avoid car accidents. The COA is standardizing the protocols for each type of orthopedic injury.

D’Ambrosia: Are orthopedic surgeries the most commonly performed surgery in China?

D’Ambrosia: So 50% of admissions in the hospital are for orthopedic trauma care then?

Zhang: Yes. The other specialties, including joint surgery, make up the remainder. In our hospital, we performed 1,400 total knee arthroplasty procedures and more than 1,200 total hip replacements.

Orthopedics Today: How is health care paid for in China? Does everybody get socialized, free care in the hospital? Is there a certain part that is free and then patients have to come up with certain amounts of money for the rest?

Zhang: Most Chinese people now have some form of insurance. The patient population can be divided in two different parts. One part is for suburban patients. Another part is for the rural area. For suburban patients who go to my hospital, they are covered 80%. They only need to pay 20% out of their own pockets. For patients from rural areas, if they stay in their local hospitals, they get 80% coverage. However, if they want to pursue medical care at another hospital, then they only get covered at 40% to 50%.

Orthopedics Today: Why is that?

Zhang: The government wants patients to stay at their local hospitals.

D’Ambrosia: What is the size of the local hospitals compared to a city hospital?

D’Ambrosia: Are the rural hospitals more traditional Chinese medicine as compared to the modern, Western-type medicine where you have more surgery, etc.? Is there more conservative care?

Zhang: I think for the local hospitals, the surgeons or physicians also use Western medicine to treat patients, but their patients are not as severe as the patients in the larger hospitals such as the one where I practice.

Orthopedics Today: Can you tell readers about the Golden Key, an interesting device that helps reduce femur fractures?

Zhang: Most femur fractures (about 90%) can be reduced by a conventional traction table. However, 10% of fractures are hard to reduce. You must first use a guide wire and then insert the nail. American surgeons use a guide wire from Smith & Nephew to insert and reduce the fracture. But the guide wire is not angle-adjustable and it is difficult to insert.

So I developed the Golden Key. With the Golden Key reducer, you can adjust the angle and you also have the ability to push the guide wire to the other end or to the other segment of the fracture. By adjusting the angle, you can place the guide wire into the distal fragment. Then you can follow it with the nail. It makes reduction and fixation easier.

Zhang: Many Chinese orthopedic surgeons have performed the valgus tibia osteotomy for more than 40 years. When they did the tibial osteotomy, they also broke the fibula, but did not take out a segment of fibula and the fibula healed. It worked for short time after surgery. Within several years, patients complained of pain again, which returned because the fibula heals. Chinese orthopedic surgeons no longer do this kind of surgery.

D’Ambrosia: So you take out one of the pillars of support?

Zhang: Yes. By taking out part of the fibula we subsequently balance the tibial plateau. That is a reason for removing a small portion of the fibula.

D’Ambrosia: What is the follow-up for these patients? How long does it stay in effect?

D’Ambrosia: How many patients failed or were not helped and had no pain relief?

Zhang: Of the 100 patients with more than 2-year follow-up, only three patients have had total knee replacements after the fibulectomy.

Zhang: Do you mean before the surgery?

Zhang: They had both medial and the lateral involvement, but the medial compartment was more severe.

D’Ambrosia: These are small numbers of patients compared to the number of people who get total joint replacements. Why has it not become more popular in China?

I have 15 patients currently where one side received total knee [arthroplasty] and the other side received a fibulectomy. Both sides are working equally well.

D’Ambrosia: Who originated the idea?

Zhang: This idea came from a doctor in a rural hospital, who was one of my students. Originally, I did not believe fibulectomy could relieve the pain. After 2 years the local doctor came to me and said, “I did a fibulectomy. The patient felt better after the surgery.” I did not believe him. This local doctor continued doing the surgery and after several years, the local doctor showed me his patients. I examined his patients and was surprised by the effect of the osteotomy. I adapted the idea and then began doing the surgery myself.