A 35-year-old right-hand dominant male physician presented to our clinic with atraumatic, sudden onset left shoulder weakness without any associated pain. The patient had no history of prior shoulder issues. He did note a life-long history of weight lifting and overhead athletics.

On physical examination, the patient had full range of motion and no visible atrophy. The patient had no evidence of scapular dyskinesia with active range of motion or a wall push-up. With resisted strength testing, he had full strength in the supraspinatus, a normal belly-press test, and full strength within all three heads of the deltoid. However, he had 2/5 weakness with resisted external rotation at the side. He also had a negative O’Brien’s test and a negative Mayo dynamic shear test. The patient had no apprehension in the abducted and externally rotated position. He had a negative Jerk test. However, the patient did have pain with posterior translation with the arm held in the adducted and internally rotated position, but without a click or subluxation. He had no tenderness to palpation at the bicipital groove or acromioclavicular joint. The patient had an otherwise entirely intact neurovascular examination distally within the left upper extremity.

Anteroposterior, Grashey, and scapular-Y radiographs of the left shoulder were normal. The axillary view demonstrated posterior subluxation of the humeral head and cystic changes of the posterior glenoid. Given the patient’s profound weakness, an MRI scan was obtained. This MRI demonstrated posterior subluxation of the humeral head with posterior labral irregularity and a paralabral cyst measuring 3.4x2x1.4 cm. The cyst was located in the spinoglenoid notch, adjacent to the posterior labral injury. This MRI did not demonstrate any signs of a rotator cuff tear, fatty atrophy, neurogenic edema or loss of muscle bulk within the rotator cuff (Figure 1).

These T2-weighted axial and coronal MRIs of the left shoulder demonstrate posterior subluxation of the humeral head with posterior labral irregularity (a) and a paralabral cyst but without any evidence of tearing within the rotator cuff (b).

The suprascapular nerve is a branch of the upper trunk of the brachial plexus with contributions from C4, C5 and C6. This nerve takes a circuitous route through the shoulder. The nerve passes medial to the base of the coracoid, under the transverse scapular ligament and through the suprascapular notch. It then provides a motor branch to the supraspinatus and sensory fibers to the glenohumeral and acromioclavicular joints before passing through the spinoglenoid notch. Finally, the nerve terminates with motor innervation of the infraspinatus. Injury to the nerve at the suprascapular notch causes weakness in both the supraspinatus and infraspinatus muscles and a vague, deep-seated shoulder pain. In contrast, injury at the spinoglenoid notch, causes isolated infraspinatus weakness, often without any associated pain as there are no sensory fibers at this level. Injury to this nerve is rare, but easily missed. A longitudinal study of an academic, referral-based shoulder surgery practice found 4.5% of new patients presented with suprascapular neuropathy, and within a general orthopedic practice these lesions would be even less common.

The etiology of suprascapular nerve injury remains incompletely understood, though both traction and compression injuries are thought to occur. Anatomic variants at the suprascapular notch, such as thickening or ossification of the transverse scapular ligament, may predispose patients to compression injuries. Retraction of massive rotator cuff tears with subsequent muscular displacement may place the nerve under tension, which is thought to contribute to muscular atrophy in massive retracted cuff tears due to denervation. Compression of the nerve at the spinoglenoid notch is most frequently related to paralabral cysts, which form due to the development of a one-way valve within a neighboring labral tear. The cyst becomes a space-occupying lesion. Contraction of the infraspinatus compresses the cyst against the posterior wall of the scapula and against the base the scapular spine. The suprascapular nerve is thus caught between the base of the scapular spine and the cyst during infraspinatus activation.

Due to their rarity and symptom overlap with other shoulder conditions, suprascapular nerve injuries are difficult to diagnose. They are frequently misdiagnosed as rotator cuff tears, subacromial impingement, labral tears or cervical radiculopathy. Occasionally, patients with a classic history, examination and imaging findings can be diagnosed without further testing. More commonly, patients undergo electromyographic studies to confirm or make the diagnosis. Lesions at the spinoglenoid notch can be particularly easy to miss because the posterior deltoid and teres minor can compensate for lost of infraspinatus strength. Thus, the true extent of the patient’s weakness may be difficult to elicit on examination.

The treatment of suprascapular neuropathy remains an area of controversy, and the natural history of this disorder remains incompletely understood. Similar to peripheral nerve compression disorders elsewhere in the body, continued compression can lead to irreversible dennervation, muscular atrophy and fatty infiltration. Thus, historically, these lesions were managed with open decompression. These open approaches involve disruption of the muscles of the rotator cuff, which are already weakened by the traumatized nerve. Recently, arthroscopic approaches have been described for decompression at both the suprascapular and spinoglenoid notches. However, these approaches require a detailed understanding of arthroscopic anatomy in regions that are typically not exposed during shoulder arthroscopy.

While currently the highest level of clinical evidence includes only retrospective cohort studies, outcomes of arthroscopic decompression in these studies have been excellent. Almost all patients experience pain relief, with some series reporting this outcome in up to 100% of patients. Similarly, 75% to 80% of patients demonstrate an improved functional status as measured by the ASES scores. Comparative studies of labral repair alone and labral repair combined with decompression of the suprascapular nerve have demonstrated improved outcomes with the combined procedure.

These arthroscopic images of the left shoulder viewed from the lateral portal demonstrate decompression of the suprascapular nerve at the spinoglenoid notch from a subacromial approach. The scapular spine (black arrow) can be seen between the supraspinatus (solid red arrow) and infraspinatus (dashed red arrow) with the suprascapular nerve (yellow arrow) traversing the base of the scapular spine compressed by the spinoglenoid notch cyst (green arrow) (a). The serous gelatinous cyst contents (green arrow) can be seen being decompressed from the cyst (b).

Given the patient’s young age and profound weakness, after a lengthy discussion of the risks and benefits, he decided to undergo arthroscopic decompression of the suprascapular nerve. After administration of an interscalane block and general endotracheal anesthesia, he was placed in a modified beach chair position. Standard posterior and anterior portals were established, and a diagnostic arthroscopy was performed. The diagnostic arthroscopy demonstrated posterior labral fraying with associated grade 4 chonrdomalacia of the central posterior glenoid. The labrum was debrided with a shaver back to a stable base with a firm attachment to the glenoid. 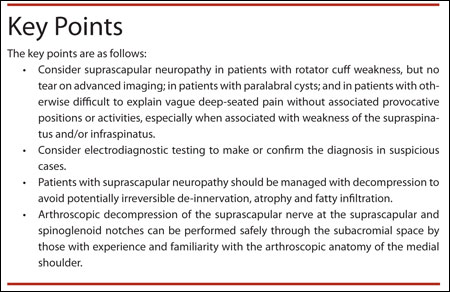 The arthroscope was then directed back into the subacromial space and the raphe between the supraspinatus and the infraspinatus was dissected medially to the base of the spine of the scapula, where the suprascapular nerve was identified and cleared of constrictions (Figure 3a). At this level, the suprascapular nerve is tightly adhered to the bony base of the scapular spine, running obliquely from antero-superior to postero-inferior. A Wissinger rod was then used to bluntly dissect into the interval between the infraspinatus and the scapula, where an area of fullness corresponding to the cyst was visualized. The gelatinous contents of the cyst were then expressed and the cyst decompressed (Figure 3b). The mouth of the cyst was then widened and debrided to prevent recurrence. We prefer to directly visualize the cyst and the suprascapular nerve through the subacromial space to ensure complete relief of all compression on the nerve.

Postoperatively, the patient did well. He began range of motion exercises on the first postoperative day with no restrictions. He began formal physiotherapy at 7 days to 10 days. He progressed through passive, active-assisted, and active range of motion prior to beginning strengthening with isometric closed-chain exercises before progressing to TheraBand (The Hygenic Corp.; Akron, Ohio) exercises and weights.

He progressively regained strength within the infraspinatus postoperatively. At final follow-up, he had no limitations or complaints and had returned to full occupational and athletic activities.