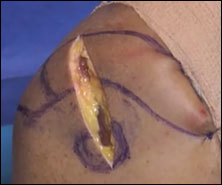 Figure 1. A longitudinal incision is made medial to the AC joint, extending to the coracoid process. Sharp dissection is continued through the fascia to the level of the AC joint capsule. 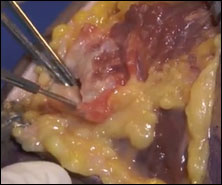 Figure 2. The AC joint is visualized and evaluated for any arthritic changes. If present, a small distal clavicle excision is performed. 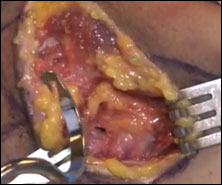 Figure 3. An aneurysmal bone hook is utilized multiple times in this technique. The opening in the CA ligament is also visualized. 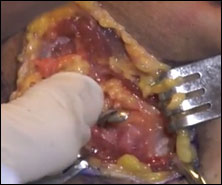 Figure 4. The bone hook is passed medial to lateral deep to the coracoid process.

Bannister compared immobilization to operative treatment, finding that patients with initial displacement less than 2 cm performed better with nonoperative intervention, while those greater required surgery. Phillips performed a meta-analysis on this controversial topic, concluding that 88% of surgically treated patients and 87% of non-surgically treated patients had a satisfactory outcome. Wojtys found comparative levels of strength and endurance in injured vs. non-injured arms in laborers and athletes after undergoing conservative treatment. However, they were concerned with long-term effects of any minimal decrease in endurance and strength, in addition to chronic pain and soreness in this active population.

Debate for the high-level athlete

This introduces another controversial topic: Does management change in the high-level athlete? Again, studies can be found that support both nonoperative and operative intervention. Tibone evaluated 20 athletes treated without surgery, and concluded that the strength of the shoulder is not affected by conservative treatment. Glick had 35 athletes treated nonoperatively, and stated that patients with a structured rehabilitation program did well and reported no pain or disability. A study by Gurd also supported the idea that rehabilitation was the primary factor resulting in a successful outcome. MacFarland evaluated nonoperative vs. operative treatment in professional baseball players finding normal function with a complete relief of pain in 80% of their nonoperative patients. Ninety percent of these patients also experienced a normal range of motion after conservative treatment. The operative group also did well with 92% regaining normal function, being pain-free, and experiencing a return of normal motion after intervention. However, Galpin found that 33% of throwing athletes treated nonoperatively had abnormal throwing ability. Wojtys and colleagues reported an incomplete recovery in 42% of throwers in their study. Because of these findings, about half of the throwers in our practice have surgery; particularly the quarterback or pitcher with a long career ahead of them.

Figure 5. The braided nine-strand PDS suture on the back table is shown.

In summary, treatment of type III acromioclavicular (AC) joint separation is controversial and will remain the center of debate in the future. Future discussions will also include management of athletes, primarily the throwing athlete, and again, no evidence-based standard of care exists.

In our practice, with type III AC joint injuries, we make operative intervention a case-by-case decision on overhead athletes and manual laborers. It has been my belief that any abnormal posterior translation, particularly in a thrower, transforms this injury into what I call a “bad” type III, requiring surgical intervention. 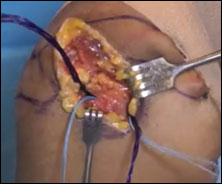 Figure 6. Both the #5 double-looped permanent suture and the nine-strand PDS suture are pulled around the coracoid. 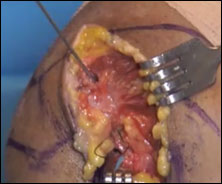 Figure 7. A Hewson suture passer placed through the drill hole made at the anterior third of the distal clavicle. 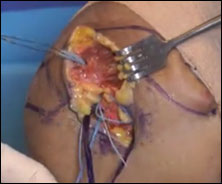 Figure 8. The medial limb of the #5 permanent suture is pulled through the clavicle drill hole. 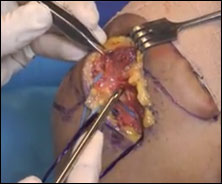 Figure 9. The bone hook is then passed around the clavicle from inferior to superior.

Below I have written my preferred technique for the acute type III AC joint separation, with a small change for chronic cases. 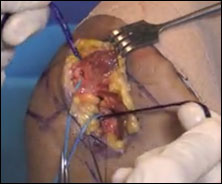 Figure 10. The medial limb of the braided PDS is then pulled around the clavicle from posterior to anterior. 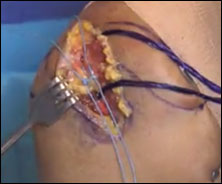 Figure 11. The clavicle is over-reduced. The strands of the #5 permanent suture are separated into two separate permanent sutures and individually tied, holding the reduction. 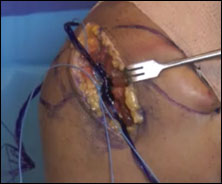 Figure 12. The braided PDS is then tied securely as back-up fixation.

My preferred technique for an acute grade III AC separation up to 6 weeks to 8 weeks post injury utilizes both braided absorbable #2 PDS and permanent #5 Ticron sutures. The patient is positioned in a modified beach chair position. A longitudinal incision is made medial to the AC joint, extending to the coracoid process (Figure 1). The fascia is incised longitudinally. A T-shaped capsulotomy is performed over the acromioclavicular joint, with the limbs preserved for later closure to promote anterior-posterior AC stabilization. The acromioclavicular joint is inspected for arthritic changes (Figure 2). If signs of moderate to severe arthrosis are noted, only 4 mm to 5 mm of distal clavicle is excised. The anterior deltoid is then split to expose the coracoid. Figure 8. The medial limb of the #5 permanent suture is pulled through the clavicle drill hole.

An aneurysmal bone hook (Figure 3) is used to tunnel from medial to lateral along the coracoid base. A small incision in the coracoacromial ligament is made to facilitate passage laterally (Figure 4). A #5 double-looped permanent suture is passed with the aneurysmal bone hook, and in the meantime, a nine-strand PDS is braided on the back table (Figure 5). This is then passed around the coracoid (Figure 6). Next, a 2.8-mm drill hole is made from superior to inferior on the anterior third of the distal clavicle, at the level of the coracoid (Figure 7). A Hewson suture passer is used to bring the medial limb of the #5 permanent suture through the clavicle (Figure 8). The aneurysmal bone hook is used to create a path behind the clavicle (Figure 9). Using looped suture, the medial limb of the braided PDS is passed (Figure 10). The clavicle is then manually over-reduced. Since the clavicle seems to always seek its level, so there is little concern about over-reducing or sliding out. The looped #5 suture is separated into its individual strands and two separate knots are tied holding the reduction (Figure 11). The braided PDS is then tied as backup fixation (Figure 12). We tie it down tight with a square knot, and we suture the ends of this off so it will not come untied. These knots are not placed directly on the clavicle, rather more distally between the clavicle and coracoid process, preventing prominence.

In chronic cases, the basic technique steps remain the same with a semitendinosis autograft used in place of the braided PDS. Return to play is 3 months to 4 months.

Disclosures: Andrews, Chillemi and Loveland have no relevant financial disclosures.