When he started his career, Larry Iwersen, MD, did not know he would become an expert on bear maulings. But by working in Kalispell, Mont., Iwersen encounters at least one patient who has suffered a bear attack a year.

“After the first patient I encountered having been mauled by a bear I realized there was very little written about the types of infections they may have and the bacteria which may be responsible for an infection. I started to collect data and develop surgical protocols to help manage bear bites,” Iwersen, who is an orthopedic surgeon at Flathead Valley Orthopedics Center, told Orthopedics Today. “I didn’t think I would become an expert until everybody realized that no one else does this. It is not like [bear maulings] is a real common problem. It just happens to be that I live [in a state] where most of the bear maulings, if not all of them, occur in the United States.”

Working with the Montana Fish, Wildlife & Parks, Iwersen has been collecting cultures of bacteria from the mouths of grizzly bears and correlating them with the types of bacteria found in the bear bites on patients. That way, when a patient who has suffered a bear attack is brought in, they can be started on the correct antibiotic immediately. Currently, Iwersen has identified more than 50 bacteria cultures, and has cross-matched 12 bacteria with bacteria that grew from the bites on patients.

“[Bears are] either eating on carrion or dead animals, or they are eating on roots out of the ground and those are going to be loaded with bacteria, too. So that is what we are trying to sort out, which bacteria are coming from the ground, which are in their teeth and which are likely to cause physiologic and pathologic infections,” Iwersen said. “[This research] helps anybody that has an animal bite. We have some idea of what we are trying to treat if there is going to be an infection and wildlife biologists can use this data. It is good for them and it adds to our database for understanding injuries that occur with grizzly bears.” 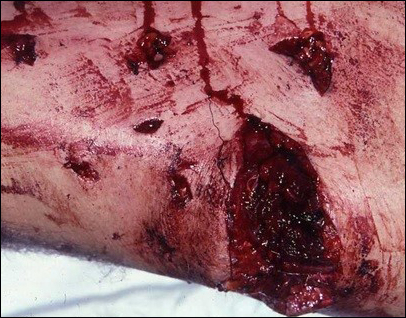 Figure 1. Pictured are bite wounds and lacerations caused during a bear attack.

To educate other surgeons and health care professionals on patient treatment when it comes to bear attacks, Iwersen presents his findings at several seminars throughout the year.

“I travel around through Canada and the United States and people invite me to give my experience and data on managing bear maulings medically,” Iwersen said. “I talk at wildlife human attack response training seminars where they review a lot of things about [animal] attacks on humans and I talk to multiple medical societies.”

According to Iwersen, the most common wounds patients who have been in a bear attack experience are bites to their hands, arms, head and neck.

Bear claws can also cause lacerations and if a bear pushes and carries a patient, they will come in with even deeper bite wounds and sometimes large avulsions of muscle and skin.

At the Flathead Valley Orthopedics Center, a protocol is followed that is spread over several days to ensure all the wounds, which can range in number from 20 to 30, are fully cleaned and will not become infected after closure. Surgery for patients of bear attacks can last for 2 hours to 3 hours. For orthopedic surgeons who do not normally see patients from bear attacks, Iwersen advises, “Don’t close the wounds until you are sure they won’t be infected. However, you need to fix fractures, tendon lacerations and arterial lacerations at the first setting.” —by Casey Tingle