A 24-year-old woman presented to clinic with complaints of long-standing right groin pain. She reported an insidious onset of pain approximately 1 year prior to presentation with significant worsening during the past 3 months. The pain was constant and mechanical in nature, made worse with forward flexion and abduction. She denied fevers, chills, dysuria or hematuria. She had no prior history of hip injury or gynecological issues. She denied any recent alterations in her exercise regimen and led an overall sedentary lifestyle. Initial conservative management with oral NSAIDs did not alleviate her symptoms and she developed progressive pain and a feeling of joint fullness.

On exam, the patient was 5’0” and 110 lbs. with a body mass index of 21.5. She ambulated with a non-antalgic gait and had full range of motion of her right hip. She reported localized pain in the right groin, but did not exhibit any tenderness to palpation. She had no erythema, ecchymoses, or abrasions over her groin or hip. Her groin pain was exacerbated by the FABER maneuver, which placed her hip in flexion, abduction and external rotation. She had a negative impingement sign and did not have pain with log roll, axial compression or straight leg raise. Her sensation was intact to light touch in all dermatomal distributions and she had palpable pedal pulses.

Figure 1. Preoperative anteriorposterior radiograph of the pelvis demonstrates a small cam lesion and soft tissue swelling on the compression side of the right femoral neck.

An initial anteroposterior (AP) radiograph of her pelvis showed no evidence of fracture, dislocation, bony erosions, femoral head changes or pincer lesions. The right hip demonstrated a small cam lesion and soft tissue swelling on the compression side of the femoral neck (Figure 1). MRI revealed a mass extending into the right anterolateral peripheral hip compartment. The mass demonstrated low signal intensity on T1- and T2-weighted images with frond-like projections and an overall size of 3 cm x 4.5 cm x 2.9 cm (Figure 2).

What’s your diagnosis and management?

Pigmented villonodular synovitis (PVNS) is a rare monoarticular proliferative disorder of the synovium characterized by exuberant proliferation of synovial villi and nodules. Although the etiology of this disorder is unknown, it demonstrates characteristics consistent with a neoplastic process, such as chromosomal abnormalities, local tissue invasion and destruction, and the ability for malignant transformation. PVNS affects men and women equally and typically exhibits in the third through fourth decades of life. It has a predilection for large joints, most commonly the knee (up to 80% of cases) but also the hip, shoulder and ankle.

Radiographs are usually the first test to establish a diagnosis and may demonstrate cystic erosions in the affected joint. MRI is a more sensitive test, as PVNS characteristically demonstrates low signal intensity on both T1- and T2-weighted imaging due to its high lipid content and hemosiderin deposition, respectively. Biopsy remains the gold standard for definitive diagnosis. For deep joints, such as the hip, CT guidance may be required to evaluate bony involvement. In this case, a CT-guided biopsy was performed and histology revealed fibrous connective tissue with hemosiderin-laden macrophages pathognomonic for PVNS (Figure 3). Other findings included mononuclear cell infiltration of the synovium, highly vascular synovial villi and occasional mitotic figures. The tissue appeared as a red-brown inflamed synovium with frond-like papillary projections. 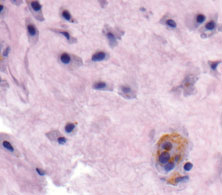 Figure 3. Histology with hematoxylin and eosin (H&E) stain of the lesion shows fibrous connective tissue and a hemosiderin-laden macrophage characteristic of PVNS. 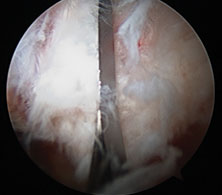 Figure 4. An arthroscopic image of the right hip in the supine position with a 70° arthroscope in the anterolateral portal demonstrates the T-type capsulotomy performed.

PVNS necessitates early surgical resection to limit articular destruction and the potential for recurrence. Open synovectomy remains the treatment of choice for PVNS of the hip, but it has demonstrated modest results compared to its treatment in other joints. Mankin and colleagues reported 11 of 12 (92%) patients with hip PVNS eventually required total hip arthroplasty due to extensive joint damage. Similarly, Vastel and colleagues reported high rates of revision surgery, osteoarthritis progression and eventual arthroplasty. PVNS recurrence rates in all joints range from 30% to 50% in the literature.

Arthroscopy is widely used to treat PVNS of the knee and ankle, and it has been postulated that hip arthroscopy can provide successful treatment with less morbidity than open procedures. Hip arthroscopy techniques are still being developed and explored, so surgeons’ relative inexperience may prevent adequate arthroscopic exposure. However, recent advances in technique have permitted a thorough evaluation of the joint surfaces, improved access for synovectomy and decreased postoperative morbidity. In a recent long-term outcome analysis, arthroscopic treatment resulted in lower PVNS recurrence rates across all joints, mostly attributed to better joint visualization for tumor eradication. Byrd and colleagues reported positive outcomes in a series of 13 patients with PVNS treated with hip arthroscopy. At an average follow-up of 63 months, there were no postoperative complications, and one patient showed MRI evidence of residual, albeit reduced, synovial disease. 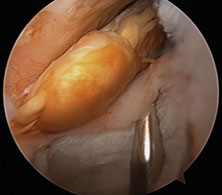 Figure 5. The soft-tissue mass in the antero-inferior quadrant of the hip capsule was found to have a brownish-red color with frond-like projections consistent with hip PVNS. 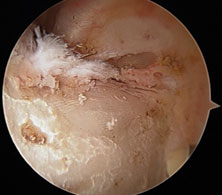 Figure 6. An intra-articular image after arthroscopic tumor resection and local synovectomy with maintenance of the vital soft tissues and bony structures within the joint is seen.

Arthroscopy was used to treat our patient. She was placed in the supine position with the right hip under gentle traction until 1 cm of joint distraction was obtained. An anterolateral portal was created first under fluoroscopic guidance, after which an anterior portal was created under direct visualization. An inter-portal T-capsular arthrotomy was carefully performed with a Beaver Blade (Pivot; Sunnyvale Calif.) (Figure 4). This arthrotomy was extended down the anterolateral femoral neck with the use of a mid-anterior accessory portal. This extension improved visualization of the inferior capsule. A Wissinger rod was then placed in the anterior portal and used to retract the inferior capsule for tumor access. The soft-tissue mass was identified in the antero-inferior quadrant of the hip capsule (Figure 5). Using the mid-anterior portal, the mass was excised using a 4-mm suction shaver and tissue grasper (Figure 6). An 8.25-mm cannula was placed in the mid-anterior portal, and through this cannula six #2 non-absorbable sutures were used to repair the capsulotomy. Finally, all portals were irrigated and closed with nylon sutures and sterile bandages were applied.

The challenge of hip arthroscopy, particularly in cases of tumor excision, is obtaining adequate exposure. This case demonstrates some of the technical innovations that have improved arthroscopic visualization in recent years. In particular, the application of additional arthroscopic portals and use of a large capsular release enabled successful resection of this patient’s hip lesion. The large T-capsulotomy enabled extensive soft-tissue retraction for nodule exposure. Furthermore, the mid-anterior portal enabled an arthroscopic grasper and shaver to directly access and excise the lesion while avoiding damage to local neurovascular structures. Technical innovations in hip arthroscopy have enhanced intra-articular visualization as well as instrument management and diagnostic evaluation of the capsule. These improvements have been reflected in a recent systematic review that revealed decreased morbidity and complications with use of hip arthroscopy.

We still caution against routine arthroscopic excision of diffuse PVNS of the hip. Tumors in harder-to-access areas, such as the posterior capsule, may be best addressed with an open excision depending on the surgeon’s level of expertise with hip arthroscopy. Further research is warranted to better characterize the arthroscopic treatment of PVNS within the hip.