A 56-year-old track and field athlete with knee pain

A 56-year-old male, elite USA Masters track and field athlete presented to clinic 2 months after he experienced sudden onset posterior left knee pain while settling into a start from a starting block during a training session. After the injury, the patient tried running off the pain without relief. During the following weeks, he started walking with an antalgic limp due to increasingly severe pain localized to the anteromedial aspect of his left knee.

At an outside institution, the patient completed a course of physical therapy and activity modification for 6 weeks, which reduced his pain at rest. However, when he attempted run, the knee pain persisted and he was unable to train or compete. The patient denied any history of instability or mechanical symptoms, such as catching or locking of his left knee. There was no prior history of left knee pain or surgery. The patient had a strong desire to return to national- and international-level competition in Masters track and field.

The patient ambulated with an antalgic gait, favoring the left leg. On examination of the left lower extremity, he had a mild effusion and significant medial joint line tenderness. There was no lateral joint line tenderness or tenderness over the medial femoral condyle. Range of motion testing was normal (from -2° to 140°) with pain on terminal flexion. The Lachman test and posterior drawer test were negative, and the patient was stable to varus and valgus stress testing at 0° and 30° of knee flexion. By comparison, musculoskeletal exam of the right lower extremity was unremarkable.

A full bilateral radiographic knee series demonstrated preserved joint spaces medially and laterally. His left lower extremity had a varus mechanical axis deformity (Figure 1). In addition, the medial femoral condyle of the left knee had a small area of osteonecrosis on the Rosenberg view (Figure 2). An MRI series was ordered and revealed extrusion of the posterior horn of the medial meniscus.

Figure 2. A preoperative radiograph in the Rosenberg view indicates the presence of a small area of osteonecrosis on the medial femoral condyle of the left knee.

The patient was diagnosed with an acute radial root tear of the posterior horn of the medial meniscus in the setting of a varus aligned knee. The posterior root tear resulted in meniscal extrusion. MRI review demonstrated a femoral insufficiency fracture, but well preserved medial compartment chondral surfaces.

In light of the patient’s history and physical examination findings, clinical suspicion was high for medial meniscus pathology. Key elements of the history, such as the specific events that immediately preceded injury, new functional limitations, the location and severity of the pain, feelings of catching or instability, the patient’s goals and desired level of future activity are important to elicit during the clinical visit. On physical examination, concomitant ligamentous injuries must also be ruled out in all cases.

Figure 3. The preoperative coronal MRI demonstrates a complex posterior radial root tear of the left medial meniscus (white arrow) (A) and an insufficiency fracture of the medial femoral condyle (white arrow) (B).

Medial meniscus posterior root or radial root tears are most commonly defined by the location of the tear in the last few millimeters of the posterior horn, near its attachment in the tibial plateau and by the radial orientation of the tear. According to several epidemiological studies, posterior medial meniscus root tears account for approximately 10% of meniscal tears. These tears commonly occur when starting to run, getting out of a car, while deep squatting or going down stairs. Additional risk factors include increasing age, female sex, higher BMI, increased Kellgren-Lawrence grade, varus weight-bearing axis and lower sports activity level.

The menisci are classically divided anatomically into three sections: the anterior horn, body and posterior horn. Meniscocapsular attachments and an anterior and posterior root attachment hold the menisci in place along the margins of the tibial plateau. In general, the medial and lateral menisci function to preserve the health of knee articular cartilage by increasing the congruency and contact area of the tibiofemoral joint. Secondary functional roles include stabilization, lubrication, nutrition and proprioception. In particular, the posterior horn of the medial meniscus bears most of the stress applied to the medial compartment during normal motion.

One mechanism of injury that has been proposed for isolated medial meniscus root tears is excessive traction forces placed on the posterior horn when a knee in flexion receives a varus force. When present, a medial meniscal radial root tear alters the ability of the circumferentially-oriented meniscal collagen fibers to transmit hoop stresses during knee loading. A tear of the posterior root of the medial meniscus causes a 24% increase in peak contact pressures in the medial tibiofemoral compartment, which can mimic the effect of a total meniscectomy. Over time, these deleterious biomechanical changes can lead to meniscal extrusion, overloading of the medial compartment, accelerated cartilage degeneration and eventual progression to osteoarthritis.

Management of meniscus root tears in older athletes present several challenges. The treating physician and patient must decide whether to perform a root repair, partial meniscectomy or pursue nonoperative treatment. In the past, partial or total meniscectomies were preferred due to favorable short-term outcomes. However, these patients often experienced poor long-term outcomes due to increased tibiofemoral contact pressures with accelerated articular cartilage degeneration. A medial meniscectomy also exacerbates varus alignment in the lower extremity, placing increased load and stress on the medial compartment. Recently, meniscus-preserving procedures have grown in popularity with the goal of restoring the functional capacity of the intact meniscus. Recent biomechanical studies have validated that an in situ pull-out repair technique effectively restores contact areas and pressures in both the medial and lateral compartments for radial tears near the posterior meniscal root attachments compared to the torn state. For these reasons, meniscus repair using an in situ pull-out repair technique was the treatment of choice for this patient.

Figure 4. Arthroscopy images demonstrate a radial root tear of the posterior medial meniscal root attachment (A), probing of the tear through a posteromedial arthroscopic portal (B) and reduction and fixation of the radial root tear to its native anatomic position (C).

Nonoperative treatment of medial meniscus root tears has been proposed for patients with degenerative tears, primarily in the setting of advanced arthritis. In patients with a degenerative knee, decreased healing potential and pre-existing chondral damage mitigates the potential benefits of meniscal root repair. For these patients, short-term symptomatic and functional improvement has been reported after a nonoperative regiment that includes physical therapy, analgesics and a home-based exercise program.

In this case, the patient’s strong desire to return to his pre-injury level of activity and to international competition, coupled with the findings of meniscal extrusion due to an acute radial root tear, well preserved chondral surfaces and failure of initial nonoperative management, were important factors in the recommendation of a meniscal root repair to provide the highest likelihood of achieving the patient’s functional and athletic goals.

Surgical goals of meniscal root repair include elimination of joint line pain, restoration of the meniscus load distribution function and return to pre-injury levels of activity. Surgical goals for the opening wedge high tibial osteotomy (HTO) include restoration of a normal mechanical axis and long-term protection of the tibiofemoral articular cartilage. During the initial clinic visits, the patient must be educated about the various risks of meniscal repair and HTO including persistent pain, nonunion, altered cosmetic limb alignment and other complications. The patient should also be aware of the functional restrictions after surgery, including non-weight-bearing for the first 8 weeks and partial weight-bearing for an additional 4 weeks to 6 weeks.

After discussing all treatment options, the patient elected to undergo an arthroscopically assisted in situ pull-out repair of the medial meniscus posterior root and a proximal tibial opening wedge osteotomy with allograft. This treatment was recommended as the patient’s best chance to return to competitive running. Arthroscopic evaluation confirmed the presence of a radial tear of the medial meniscus posterior root (Figure 4). Postoperative restrictions included non-weight-bearing for the first 8 weeks, with gradually increased partial controlled weight-bearing thereafter. Long leg anteroposterior radiographs demonstrated correction of alignment to neutral (Figure 5). At 1 year after surgery, the patient had returned to running and sprinting without pain or swelling. He was also able to resume high level, competitive Masters track and field sprinting events on the national and international circuit. 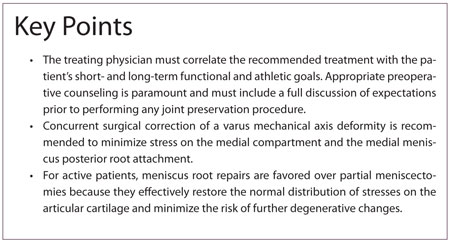