The role of the capsule in arthroscopic hip surgery has recently received a great deal of attention. Capsulotomy is necessary to navigate the joint for both diagnostic and therapeutic purposes. However, many authors now contend that iatrogenic instability may result if the capsulotomy is not closed (Figure 1). As the number of hip arthroscopies has dramatically increased up to 18-fold during the past decade, warranted concern has been emphasized about the size and type of capsulotomy performed and its routine closure, as Joshua D. Harris, MD, and colleagues noted in their 2013 article in Arthroscopy Techniques .

Although iatrogenic frank dislocation after hip arthroscopy is rare, its consequences are severe as Dean K. Matsuda, MD, and co-investigators reported. The concept of “micro-instability” or non-traumatic instability following hip arthroscopy was also introduced as a potential cause for postoperative recurrence of symptoms by Marc J. Philippon, MD, and colleagues in 2007. Thus, capsular preservation (minimal capsulotomy, routine closure) is encouraged for retention of normal anatomy and optimizing outcomes, which Harris and colleagues wrote about in the Journal of Arthroscopy .

The iliofemoral ligament is the strongest of four discrete hip capsular ligaments (in addition to ischiofemoral, pubofemoral and zona orbicularis), and its primary purpose is to restrain anterior translation with hip extension and external rotation. This static soft tissue stabilizer of the hip joint is disrupted during both interportal (anterolateral to mid-anterior) (Figure 2a) and “T” (Figure 2b) capsulotomies. Three cadaveric biomechanical studies by John D. Hewitt, MD, and colleagues in 2002, Hal D. Martin, DO, and colleagues in 2008, and Casey A. Myers, MS, and colleagues in 2011 illustrated the importance of the iliofemoral ligament to the structural integrity of normal hip joint mechanics. They concluded that iliofemoral sectioning results in increased external rotation, extension and anterior translation with no difference between the intact and repaired state. 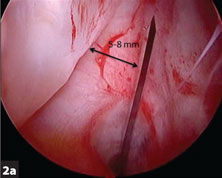 For interportal capsulotomy, the incision is made in the right hip anterior capsule with the patient supine, in traction, using an arthroscopic scalpel, while viewing from the anterolateral portal. It is important to leave a sufficient cuff of tissue on the acetabular side to repair at the conclusion of the case. 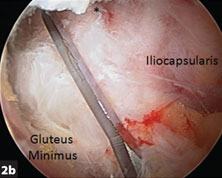 For “T” capsulotomy, this incision is made in the right hip anterior capsule over the anterosuperior femoral neck with the patient supine, in traction, using an arthroscopic scalpel, while viewing from the anterolateral portal. The iliocapsularis (medial) and gluteus minimus (lateral) are the anatomic landmarks used to make the “T” in the capsule, which affords >180° visualization of the peripheral compartment for femoral head/neck cam osteochondroplasty.

Nine cases of post-arthroscopic iatrogenic hip dislocation have been presented in the literature by research teams led by Binali, Ilizaliturri, Matsuda, Mei-Dan, Ranawat, Sansone and Souza. Due to publication bias, this is likely a significant underestimate of the true incidence of instability following hip arthroscopy.

The following patient-, hip-, and surgical technique-specific factors have been associated with this uncommon, but serious complication, which Harris and colleagues reviewed in their 2013 study in Arthroscopy :

In this situation, revision surgery — either arthroscopic or open — for capsulorrhaphy is indicated.

Patients indicated for hip arthroscopy should always undergo a thorough evaluation, history and physical examination. Subjective complaints typically include deep groin pain exacerbated by hip flexion, internal rotation and adduction. Pain is often relieved from intra-articular local anesthetic injection, even if only temporarily. Objective exam findings often include loss of internal rotation with the hip in flexion and impingement signs. Radiographs may illustrate findings of femoroacetabular impingement, such as cam, pincer or combined morphology.

Advanced radiographic osteoarthritis is a contraindication to arthroscopy.

Upon the conclusion of central and peripheral compartment work (labral refixation, articular cartilage treatment, ligamentum teres management, acetabular rim trimming and femoral osteochondroplasty), the surgeon is faced with the decision of whether and how to perform capsular closure. Clearly, larger capsulotomies require more sutures for repair or plication. Thus, the surgeon should make the capsulotomy at the start of the case as large as necessary to address the pathology, but no larger. Aggressive capsulectomy should be avoided when exposing the acetabular rim for acetabuloplasty, as this may leave insufficient tissue for repair later. Further, if excessive tension is required to repair the capsule, this may predispose the patient to postoperative stiffness. However, in patients with generalized ligamentous laxity, greater degrees of plication may be warranted. The degree of repair or plication may be customized with the “size of the bite” taken from each capsular edge.

Closure should begin at the most distal end of the “T” capsulotomy near the intertrochanteric line and proceed proximally toward the interportal capsulotomy. Visualization is reduced as each successive suture is advancing. We prefer to tie each knot as we progress, rather than tie all sutures after they have all been passed.

Depending on the surgical indications and type and size of capsulotomy performed, there are three ways to close the capsule. Many hip arthroscopists agree that this part of the case is difficult and warrants precision in suture placement. Suture-shuttling systems, such as the SutureLasso system (Arthrex; Naples, Fla.) or the Spectrum system (ConMed Linvatec; Largo, Fla.), are familiar to many shoulder arthroscopy surgeons and the same principles may be applied to the hip.

The suture shuttle instrument pierces one limb of the capsule (Figure 3a) and the shuttle bridges the capsular gap while a tissue penetrator-passer pierces the other limb and retrieves the shuttle. The shuttle then passes the suture (Figure 3b). We prefer to use high-strength, braided nonabsorbable suture for closure using standard arthroscopic knot-tying fundamentals, however other surgeons prefer to use braided, absorbable sutures for capsular closure. 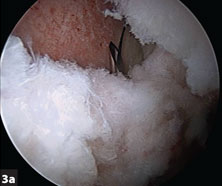 While viewing from the anterior portal in the supine position without traction in the left hip, the surgeon places a crescent suture lasso through the anterolateral portal and passes it through the lateral capsular limb. 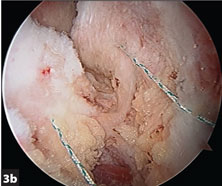 Side-to-side high-strength braided non-absorbable suture is seen in each capsular limb prior to standard arthroscopic knot-tying.

Automated suture-passing devices, such as the InJector II (Pivot Medical; Sunnyvale, Calif.) are also commonly used in capsular closure. These instruments pierce the capsule, and pass and retrieve the suture through one capsular limb in one step.

When closing the interportal capsulotomy, you pierce and pass suture on the acetabular side (Figure 4a) before addressing the capsular side (Figure 4b). While these devices appose the tissue edge-to-edge, some newer devices allow for greater degrees of single-step capsular plication. One device (CapsulePass; Pivot Medical, Sunnyvale, Calif.) that can accomplish the single-step plication pierces one capsular limb, passes the suture (Figure 5a) and then pierces the other capsular edge and retrieves the suture (Figure 5b), which is all carried out through the same portal (mid-anterior).

The automated capsular closure device (InJector II; Pivot Medical, Sunnyvale, Calif.) grasps the acetabular side first (a) and then grasps the capsular side next (b).

As with the automated suture-passing devices, it is easiest to pierce and pass suture on the acetabular side prior to the capsular side.

Verification of complete capsular closure is ensured when no femoral head or acetabular labrum is visible.

A postoperative hip orthosis allows motion from 0° to 90° flexion, with crutch-assisted gait and 20 pounds of flat-foot weight-bearing. An abduction pillow or anti-external rotation boots prevent hip external rotation at night while sleeping. External rotation and/or extension may disrupt any capsulolabral repair performed. Continuous passive motion and/or stationary bicycling may be used for the first postoperative month to help reduce adhesion formation. Circumduction hip rotations are also used in the early postoperative phases to facilitate early hip rotation. Brace and crutch use is weaned after 3 weeks to 4 weeks once the gait is normalized. We recommend slow muscle strengthening progression to avoid iliopsoas tendonitis. Treadmill running may commence at 3 months to 4 months and sport-specific training at 3 months to 6 months.

The arthroscopic hip surgeon should be aware of the indications and contraindications for capsular repair or plication. Capsular closure should initially be based on the type and size of capsulotomy made to gain central and peripheral compartment access. There are advantages and disadvantages to capsular closure, as well as proponents and opponents of that concept. Three common techniques are currently available to close the capsule during hip arthroscopy. Based on the results, we recommend interportal and “T” capsulotomy with routine complete capsular closure.