BERLIN — Significant variance seen in Knee Society Scores for primary total knee arthroplasty has called into question the score’s utility for effectively measuring function in patients postoperatively, according to a study presented at the 13th EFORT Congress 2012, here.

The disparity range (the difference between maximum and minimum average scores reported over 71 study groups, including 4,170 patients, across 37 studies) in the Knee Society Score (KSS) reported in the analysis that Senden presented was 42 points and 44 points, respectively, for KSS knee and KSS function. This was too large to only be attributed to treatment differences or patient indications.

“This variability shows that the reliability of KSS scoring is poor, which challenges the concurrent validity of the KSS,” Senden said. She suggested using additional knee scores, such as patient-reported outcome measures (PROMs) like the Knee Injury and Osteoarthritis Outcome Score, and the recently developed new Knee Society Score. However, further studies are needed to see whether the reliability is improved with these patient-reported outcomes, she noted.

According to the study abstract, KSS scoring differs between hospitals, countries and cultures and even between individual doctors. The average KSS knee score over all study groups ranged from 23 points to 65 points, showing a difference of 40 points, which covers nearly half of the 100-point KSS scale. 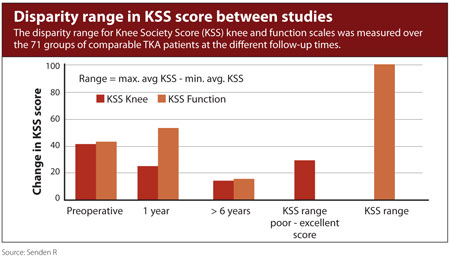 In addition, investigators noted in two studies that the preoperative knee function was so high that it would be considered a fair outcome and not a low preoperative score indicating for TKA.

Except for KSS function scores at the 1-year follow-up, the postoperative disparity range was either similar or smaller than that of the preoperative scores, which was noted in the abstract.

In addition to PROMs, another possible alternative, Senden said, was to perform objective inertia-based motion analysis tests, which could analyze function without requiring patient input.

“I think this will become increasingly necessary for outcome assessment in clinical studies,” Senden said. – by Jeff Craven

It is interesting to note that the ranking into categories of the Knee Society Score (KSS) has never been validated despite the fact most knee surgeons use it to assess their patients. The new patient-related outcome measures published this year by Scuderi and colleagues also take into account the expectations of the patient and are not only physician-derived.

This study supports a poor inter-rater reliability of the first KSS and challenges the validity of the KSS. The present question is whether its reliability is improved with the new KSS score. The study by Scuderi and colleagues validated, in a thoughtful and methodical fashion, the new KSS score confirming inter-reliability and analyzed it for different item functioning.