For 20 years, the European Hip Society has provided a forum where hip specialists could discuss research, clinical advances, and treatment results associated with hip pathologies via congresses and a peer-reviewed journal.

Since its formation in Hamburg, Germany, in 1992, the goal of the European Hip Society (EHS) “is to maintain and spread at the highest educational and cultural level information about the treatment of hip pathologies around Europe and to represent the high tradition of European hip treatment all over the world,” EHS president Luigi Zagra, MD, told Orthopaedics Today Europe. This mission includes hip pathologies treated surgically or nonsurgically in everyone from infants to the elderly, said Zagra, who is chief of the Hip Department at Istituto Ortopedico Galeazzi IRCCS in Milan and an Orthopaedics Today Europe Editorial Board member.

The desire to establish the EHS began with Reginald Elson, MD, of Sheffield, United Kingdom.

“He was the society,” Roberto Giacometti Ceroni, MD, a consultant orthopaedic surgeon at Istituto Galeazzi, told Orthopaedics Today Europe. Elson was the society’s secretary general through 2000.

It was always clear that congresses were essential to the organization. Founding member Emmanuel K. Dretakis, MD, the first EHS president, organized the inaugural congress in 1994 on the island of Crete. That first meeting drew many papers – 105 original papers were presented, according to Eduardo Garcia-Cimbrelo, MD, of the Department of Orthopaedics, Hospital Universitario La Paz, Madrid. 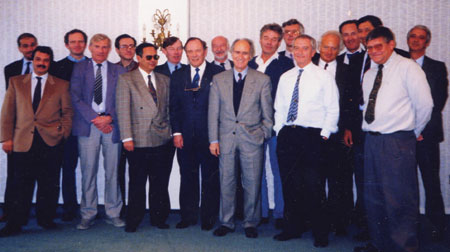 All the founding members of the European Hip Society (EHS) are pictured at the inaugural meeting of the society, which was held in October 1992 in Hamburg, Germany.

Attracting attendees, however, proved more challenging. “The first meetings were not well attended,” Giacometti Ceroni, an EHS past president, said.

The 2002 EHS congress in Baveno, Italy, was a turning point for the EHS for several reasons, Giacometti Ceroni said. For the first time, the program featured invited speakers.

“We had the free papers done by the members, and we had a number of lectures by very well-respected orthopaedic surgeons in Europe,” he said. “We had a number of reputable speakers and the meeting was very important from a scientific point of view.”

In addition, around this time the EHS restructured its board, establishing term limits for members.

“These facts – opening the door to invited speakers, increasing the scientific level of the society, and changing the board of the society – gave to the society a completely new approach,” Giacometti Ceroni said. “The society became a real important scientific society in Europe.”

The biennial congresses are important to the EHS and its members because they allow attendees to engage in lively debate. “At the biennial congresses, there are always vivid discussions,” said EHS Secretary General Martin Krismer, MD, a director at Universitätklinik für Orthopädie at the Medizinische Universität in Innsbruck, Austria, and an Orthopaedics Today Europe Editorial Board member. “In major congresses, there is no opportunity for such a personal discussion,” he said. 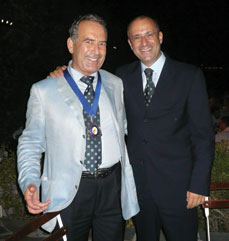 George Macheras, MD, (left) was outgoing president of the EHS in 2010 when its congress was held in Athens. He is seen with current EHS president Luigi Zagra, MD, (right).

Over the years, the EHS has built a strong partnership with the European Federation of National Associations of Orthopaedics and Traumatology (EFORT), holding separate combined meetings, such as the Combined EFORT-EHS Advanced Instructional Course in 2009 in Milan, an EFORT ExMEx course in 2012 in Athens, and special sessions during EFORT congresses, like the one on conservative treatment of hip osteoarthritis held in May at the 13th EFORT Congress 2012.

“At the beginning, to publish a paper in Hip International was not very rewarding,” Giacometti Ceroni said. However, he said that its scientific level has increased significantly now that the journal is included in Index Medicus and Medline.

The society has made many contributions to the specialty since its inception. One of the most significant of these was to provide a common stage for the discussion of the various techniques used and traditions followed throughout Europe.

The EHS ensures all opinions are well represented at the biennial congresses and in papers published in its journal, according to Giacometti Ceroni.

Face of hip care in Europe

Perhaps the greatest contribution of the EHS is sharing its members’ experience.

“We have members who are top-level, world-recognized surgeons,” Zagra said. “Many times when there is something on the European level, we are contacted as a society to be a part of it,” he said. For example, this year the EHS was part of an expert panel that developed a metal-on-metal hip implant consensus statement titled, “Current evidence on the management of metal-on-metal bearings.”

The society is also in contact with emerging countries like India and China for scientific collaboration, Zagra said.

In the future, the EHS aims to increase its membership and representation in Eastern Europe, he said. “In the next decade, [we must] improve education and scientific knowledge and trials among the members and non-members.”

The EHS also plans greater involvement with the various implant registries, Giacometti Ceroni said. “But we have to be careful in using the registry data,” he said, noting that the data may be reliable, but their interpretation may not be, and that could prove dangerous. Giacometti Ceroni is confident, however, that under the leadership of the current board the EHS will continue to grow and its scientific value will expand worldwide. – by Colleen Owens

As a founding member of the European Hip Society (EHS), I participated in the first meeting where we decided to found EHS based upon a constitution. I and other participants suggested the EHS should focus not only on total hip replacement, but also on fractures, osteotomies and pathologic conditions affecting the hip joint.

At the 1993 EHS meeting, I was elected the first president of EHS, a position I held through 1995. Reg Elson, MD, FRCS, was elected secretary, and Steen Jensen, MD, PhD, of Copenhagen, Denmark, was elected treasurer. It was also decided that the first domestic meeting of the EHS would be held in Heraklion, Crete, on June 2-3, 1994. With Reg Elson, we had hardly worked to organize this first meeting of the EHS. About 200 orthopaedic surgeons attended the 1994 meeting, which was a great success for the newly formed EHS.

Reg Elson — a linguist, a gifted organist and an intellectual person, was the heart of the EHS. He had the difficult task of recruiting European hip surgeons known for their scientific contributions in this area to become founding members of EHS. His presence played an important role in the organization and its subsequent progress.

I believe the important contributions of the EHS in hip surgery are its domestic meeting, which gives hip surgeons the opportunity to discuss their experiences and solutions to difficult hip problems, and the role it plays a role in planning common polycentric protocols for studying hip diseases and injuries, such as osteoarthrosis and fractures, and their socioeconomic impact.

I am optimistic about the future of the EHS because its journal and 10 European meetings to date are successful and it has a growing membership. What is probably most essential for further progress, however, is closer cooperation of hip surgeons with basic scientists and bioengineers, and establishing more polycentric protocols.