Reports show that many reverse shoulder procedures are performed in patients younger than 70 years.

SAN FRANCISCO — While a search of the American Board of Orthopedic Surgery part 2 database reveals a gradual increase in the number of reverse shoulder arthroplasties performed, investigators of a recently presented study also found a high complication rate with the procedure and that a third of cases were performed on patients younger than recommended guidelines.

“The rate of reverse arthroplasty is increasing,” Stephen C. Weber, MD, said during his presentation at the American Academy of Orthopaedic Surgeons 2012 Annual Meeting. “One-third are performed under Dr. Charles A. Rockwood, Jr.’s recommended age [limit of 70 years]. The 27% complication rate is reasonable, but high even with short-term follow-up.”

Weber and colleagues studied the 6-month case lists of part 2 certification candidates submitted to the American Board of Orthopedic Surgery between 1999 and 2010, and identified 320 cases of reverse shoulder arthroplasty with a mean 10.1 weeks follow-up. The first reverse shoulder arthroplasty case was reported in the database in 2005, Weber noted, and the procedure represented 0.17% of all cases reported in 2009. The search also revealed that reverse procedures represented 2.6% of cases performed by shoulder fellowship-trained surgeons.

Overall, the investigators discovered that one-third of the reverse shoulder arthroplasties reported were performed in patients younger than the recommendation of 70 years. 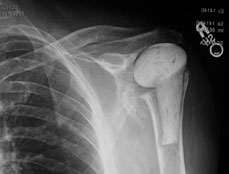 “The reverse prosthesis continues to be a viable option, and the complication rates were not catastrophically different from what has been previously reported,” Weber said. “Many of these patients probably had few other options.”

Limitations of the study included the use of surgeon self-reports and short follow-up, which Weber said would not document cases of loosening, late dislocations or notching.

He highlighted the young age of patients as cause for concern.

“The age is worrisome and given the current survivorship data, this is bothersome to me because there are not great options for the failed reverse [shoulder],” Weber said. “Fellowship training did not improve patient selection or results, if you think younger age is bad, and why is that? Well, many residents are getting exposed to reverses in their training and so may have been exposed to this new technology. Recognize that most of the candidates were doing four to six reverses a year and may not have been early on their learning curve. The truth of the matter is that a lot of the candidates are savvy in that they are not going to do a case [in which] they are worried about the outcome during their reporting period.” – by Gina Brockenbrough, MA

The recommended age for use of a reverse shoulder arthroplasty (RSA) has been arbitrarily set by surgeons performing this surgery when it was first introduced into clinical practice. The age was established for use in the elderly because of the assumption that these implants would fail in a shorter time period than anatomic total shoulder replacement. The survivorship of a well performed primary reverse total shoulder arthroplasty (TSA) for treatment of cuff tear arthroplasty has not been compared to a well performed primary anatomic TSA for treatment of osteoarthritis in a group of patients with the same range in age. The recommended age for primary RSA is not defined by clinical data. That being said, any shoulder replacement should not be performed if a better alternative is available to the patient, and the younger and more active the patient, the more likely any prosthetic will fail at an earlier point in time.

In the article, the age of patients having primary RSA and revision RSA is not defined. Many patients with failed anatomic arthroplasty are younger than the age of 70 years, and RSA is the only and best alternative to resection arthroplasty or another anatomic replacement that will often yield a poor outcome with short-term survivorship.

What is clear from the Weber study is that patients younger than age 70 years receive RSA and that is not new information, nor should it imply that patients younger than the age of 70 years were treated incorrectly. The second point is that more RSAs are being performed as more surgeons become familiar with the procedure. This increase in frequency is likely to continue for many years to come.