Failure rates neared 37% in patients with femoral neck fractures treated with posterolateral femoral locking plates, according to a study presented at the American Academy of Orthopaedic Surgeons 2012 Annual Meeting.

“Locking plate constructs resulted in inferior outcomes with a high rate of mechanical failure, especially amongst displaced fractures,” study investigator Marschall B. Berkes, MD, of the Hospital for Special Surgery in New York City, said during his presentation. “We believe that this construct is too stiff, preventing micromotion, thus placing the burden entirely on the implant, leading to these failures. We would not recommend its use for femoral neck fractures, instead favoring more flexible constructs.”

Berkes, under the guidance of his mentor, Dean G. Lorich, and colleagues previously studied other fixation methods in their quest to curtail femoral shortening and loss of reduction. They found good results using length-stable fixation, which required intraoperative compression and fixation with fully-threaded screws, but femoral shortening and differences in offset led them to consider a new posterolateral femoral locking plate with a fixed-angle construct.

Berkes and colleagues conducted a minimum 1-year follow-up of 18 patients with femoral neck fractures fixed with posterolateral femoral locking plates and compared the findings to a historical control group with a similar mean age, gender distribution and percentage of displaced fractures who were treated with length-stable fixation. Indications for operation with the locking plate included femoral neck fractures in patients younger than 65 years, displaced fractures in patients older than 65 years who remained physically active and any minimally or nondisplaced fracture regardless of age, Berkes said. 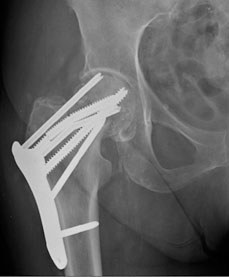 This postoperative AP radiograph of the hip shows broken locking screws, loss of reduction and screw perforation into the joint.

Postoperative radiographs were used to assess the quality of reduction and were compared to radiographs taken at a minimum of 6 months to assess for femoral neck shortening. Other outcome measures were collected at a minimum of 1-year follow-up including Harris hip score, hardware-related complications and reoperation.

Although 17 of the 18 patients in the locking plate group achieved anatomic reduction, investigators found the group had lower union rates and Harris hip scores and higher reoperation and complications rates than the control group.

The researchers found seven cases of failure in the locking plate group with screw breakage and varus collapse as the main culprits of failure. They also found one instance of screw breakage with a stable bony collapse that resulted in malunion and one fracture of the most distal screw that required a revision open reduction and internal fixation.

“This mode of mechanical failure suggests to us that this fixation was simply too rigid to allow for femoral neck union, inhibiting micromotion and preventing the healing process from occurring,” Berkes said. “Looking further into this, we feel there may be some role of fracture comminution and/or fracture site resorption that occurs, creating a situation where the lack of direct bony contact with the locking plate construct prevents any sort of motion at the fracture site. This load would then be transferred entirely to the metal, and at that point becomes a race between bony union and mechanical failure.”

He added, “We would submit to you that some degree of autodynamization may be necessary, which is simply not afforded by the locking plate construct.” – by Renee Blisard Buddle

The paper is interesting because it suggests that the lack of compression and sliding in the focus of fracture of the femoral neck hinders the consolidation of fracture. In spite of being undesirable, the shortening of the femoral neck worsens the functional results, and the locked and multiplanares screws do not promote the compression on the fracture focus. Therefore, the chance of failure in fracture consolidation increases. The failure of consolidation seems to generate worse results than those achieved with other devices that have a larger index of consolidation, in spite of some shortening of the femoral neck, which in turn, affects the final functional result. The research of new devices may provide a better understanding and treatment of these fractures in the future.