LAS VEGAS — Although previous studies have shown better results with hip resurfacing compared to total hip arthroplasty, level I research from Canadian investigators indicates no significant difference in the clinical outcome between the procedures.

“[There was] no difference in the clinical outcome based on this functional study,” Martin Lavigne, MD, MSc, said during his presentation at the American Academy of Orthopaedic Surgeons annual meeting. “There was an earlier recovery in large diameter heads and hip resurfacing compared to what the literature shows between 28-mm head total hip arthroplasty. The only remaining advantage of hip resurfacing may be bone preservation, although with the current survivorship of uncemented stems showing good 25 year results, that might not be a true advantage.”

Lavigne noted that previous studies showing superiority with hip resurfacing may have been influenced by patient selection bias, patient perception or the use of large diameter heads in hip resurfacing.

To eliminate these potential confounding variables, Lavigne and colleagues conducted a randomized, control trial evaluating the clinical outcome and gait characteristics of 48 patients who underwent either hip resurfacing or total hip arthroplasty (THA) using a large-diameter head (more than 38 mm) and were blinded to their treatment group up to 1 year postoperatively. In addition, the investigators compared the study groups to a control group of 14 normal participants for gait analysis.

“Both groups reached control group speed at 6 months postoperatively, which is much quicker than what you see in THA, since functional deficit usually persists of up to 1 year,” Lavigne said.

The study groups also demonstrated no significant differences regarding hop, muscle strength and standing tests. While the investigators discovered that the THA group showed a slight advantage in the step test, the hip-resurfacing group did slightly better on the functional reach test. In addition, they found no significant differences between the groups regarding WOMAC and UCLA sores. The groups also reported similar perception regarding how their hips felt, and investigators found no reports of thigh pain in either group. 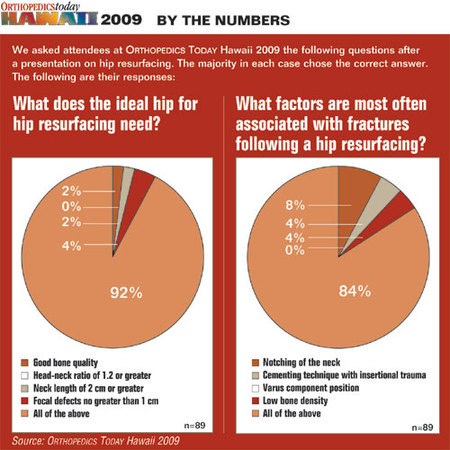