SAN DIEGO — Careful attention to anatomy is essential in proper handling of ACL reconstruction and the elimination of reconstruction as a risk factor for osteoarthritis, according to a feature lecture here.

In a feature lecture at the 2011 Annual Meeting of the Arthroscopy Association of North America, Freddie H. Fu, MD, outlined his belief that surgery should be individualized for each patient and the concept of non-anatomic ACL reconstruction should be eliminated.

“What has happened in the last 25 years is we have seen a change in the anatomy of the ACL wherein we invented something called isometric placement in the late 80s, and it has put the ACL in an incorrect anatomical position,” Fu, who is an Orthopedics Today Editorial Board member, said.

The results of improper reconstruction in these cases were acceptable in the short term, however, patients would later begin to experience arthritis changes.

“We are here today because we need to eliminate non-anatomical ACL reconstruction as a risk factor for osteoarthritis,” Fu said.

He also cited his own case of a National Football League player who underwent an anatomically incorrect ACL reconstruction and had a successful 11-year career. However, he started to develop arthritic changes 12 years after the procedure. Fu went on to note that the elimination of non-anatomical ACL reconstruction as a potential risk factor for osteoarthritis is a necessity.

“We do not know how much is necessary,” Fu noted. “We are studying to see how much ACL we really need to restore in the knee in the long-term.” 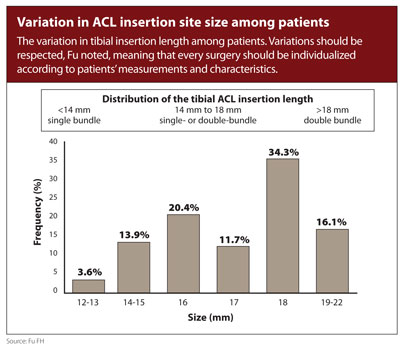 These findings, Fu said, indicate a need to individualize surgery for patients and obtain a true understanding of the anatomic principles in dealing with the ACL.

“If we do a single-bundle, we do something called a matched anatomical single bundle — anteromedial (AM) to AM, posterolateral (PL) to PL,” Fu said. “What I did before was PL to a high AM, but this is what many people are doing today, — AM to AM — and I propose we should be taking a little bit of AM and a little bit of PL … It all starts with a good anatomical single bundle. It is important not to go into the wrong tunnel anatomically in the very beginning.”

The take-home message, Fu said, is that a proper understanding of anatomy is critical in the performance of successful long-term ACL reconstruction.

“This is not easy because we have a lot of bad habits to shed,” Fu said. “The ACL is not simple. We have to think about morphology, neuromuscular function … how much do we do during daily function? In the future, I think we need to tailor surgery to every individual — but we also need objective outcome measurements. We need to find out how or why outcomes are so good … or not as good as we may think.” – by Robert Press