KOLOA, Hawaii — An in-place protocol for referring patients for hip arthroscopy will increase the odds of having better results with the procedure, according to an orthopedic investigator here.

“Who do we refer for hip arthroscopy? In general it is patients who are in pain, with or without mechanical symptoms thought to be from the hip,” he said. Potential hip arthroscopy patients should not have responded to conservative measures, such as activity changes and physical therapy, and should have minimal or no osteoarthritis (OA).

Symptoms signaling a referral for femoracetabular impingement include: hip pain that is worsened by flexion activities, such as squatting or prolonged sitting, that significantly limits activities and a positive impingement sign on clinical examination — pain elicited with 90° of flexion and internal rotation and adduction of the femur.

In terms of age, he said, the insurers recommend adolescent patients should be skeletally mature with documented closure of growth plates, and adult patients should be too young to be considered appropriate candidates for total hip arthroplasty or other reconstructive hip surgery — usually younger than 55 years. “But I can tell you this,” Matsuda added, “recent evidence supports patients as young as 11 or 12 years old benefiting from this procedure, as well as people older than 60 years without arthritis.”

Imaging data should also be used in the decision. Morphology indicative of cam or pincer-type femoroacetabular impingement, such as pistol-grip deformity, femoral head-neck offset with an alpha angle greater than 50°, a positive posterior wall sign, acetabular retroversion (overcoverage with crossover sign), coxa profunda or protrusion, or damage of the acetabular rim.

He said that referrals should be made sooner rather than later to avoid irreversible damage. “Some insurers say 3 months of failed conservative care before referral. Early referrals are also starting to be supported in the literature and the insurers are starting to get on board with that.”

Additionally, he stated that the government has recognized the validity of these arthroscopic surgeries and formally issued new CPT codes this year for arthroscopic acetabuloplasty, femoral osteochondroplasty and labral repairs.

Matsuda stressed the importance of knowing when not to refer for hip arthroscopy and provided the following examples: cases of advanced OA; patients with moderate-to-severe dysplasia; patients who have not undergone the sufficient course of conservative treatment, especially in snapping hips. Physicians should also avoid referring patients for hip arthroscopy if there are no experienced hip arthroscopy surgeons in their referring area. – by Lee Beadling

Attendees were asked: What radiographic findings suggest that progression of hip disease is likely? Here are the results from the audience response system: 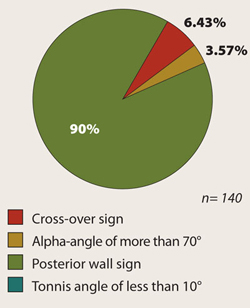