During a routine follow-up examination for glaucoma suspicion, a patient presented with fleeting inferior visual field haze in the left eye. Is this a new urgent or emergent event or a progression of his glaucoma?

A 74-year-old man presented with complaints of a new haze in his left eye over the past 4 days. He reported the haze was “bat shaped,” located in the inferior-central portion of his visual field and non-moving.

Past ocular history included being monitored as a glaucoma suspect (due to moderate optic nerve cupping and borderline IOP) and mild anterior cortical and nuclear sclerotic cataracts. Medical history included type 2 diabetes for 12 years under moderate control (last HbA1c was 7.4, 2 months prior to exam) without history of retinopathy. His health history features were seizure disorder, hyperlipidemia and an unruptured cerebral aneurysm 6 years ago that is under observation. A cerebrovascular accident 4 years ago is also noted in his record.

The patient’s best corrected visual acuity was 20/25 OD and 20/30 OS. Pupil testing appeared normal, motilities were normal, confrontation visual fields were full in both eyes albeit variable in the left eye. Amsler grid testing on the right eye was normal; however, the left eye was positive for distortion below fixation although the subjective responses were not all certain and came with a degree of variability. On red cap desaturation testing, the right eye was 100%, and left eye was 75% saturation in comparison (a 25% reduction). However, no relative afferent pupillary defect (RAPD) was apparent.

Slit lamp examination was unremarkable, and IOP via Goldmann applanation tonometry was 19 mm Hg OD and 21 mm Hg OS (IOP was within the patient’s typical untreated range with thicker-than-average central corneal thickness in both eyes). On dilated fundus exam, the right eye appeared within normal limits while the left eye had a prominent area of whitening along the superior arcade. An OCT of the macula ruled out edema; however, an OCT of the area in question in the left eye revealed retinal thickening.

The tentative diagnosis for this “bat shaped” inferior visual haze was a branch retinal artery occlusion (BRAO). The retina specialist was immediately consulted to evaluate this patient and agreed with our assessment. No emboli were apparent. The specialist felt that the whitening appearance was, in fact, a large cotton-wool spot and suspected that the branch artery occlusion was more specifically a cilioretinal artery type occlusion given that 4 days elapsed until the time of ophthalmic consultation. 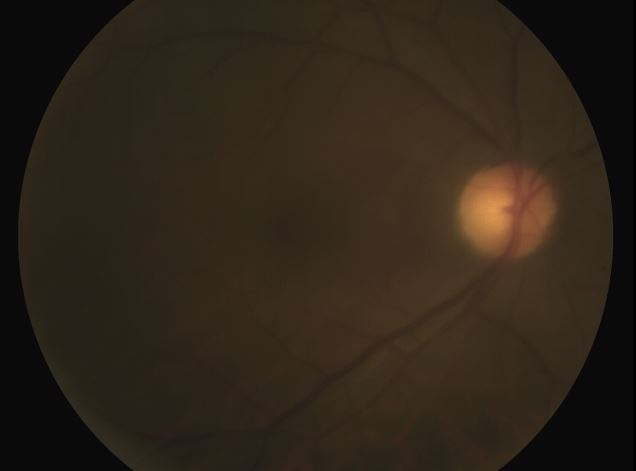 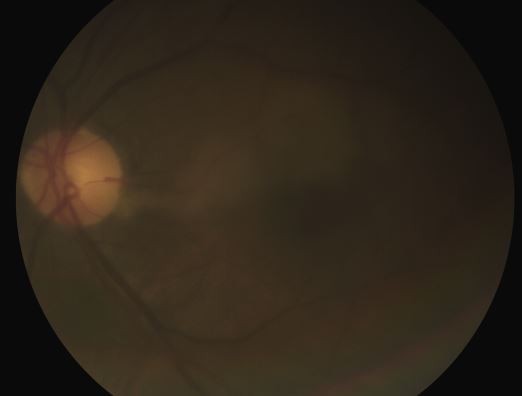 The right eye appeared within normal limits on dilated fundus exam. The left eye had a prominent whitening of the superior arcade.

Because there was a history of an unruptured cerebral aneurysm 6 years ago and a cerebrovascular accident 4 years ago, the retina specialist sent the patient to the emergency department for stroke work-up, including MRI. There was no time for 24-2 visual field testing, although the Amsler grid was somewhat suggestive of a visual field loss corresponding to the retinal finding.

In addition to MRI, magnetic resonance angiography and venography (MRA, MRV), carotid duplex, echocardiogram, erythrocyte sedimentation rate (ESR) and C-reactive protein were performed to rule out giant cell arteritis (GCA); although there was no RAPD, the presence of red desaturation and patient demographic raised the level of caution. Other signs of GCA were not clear; the patient denied scalp tenderness, jaw claudication and malaise. 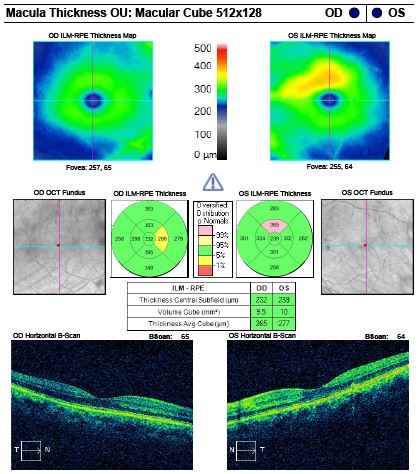 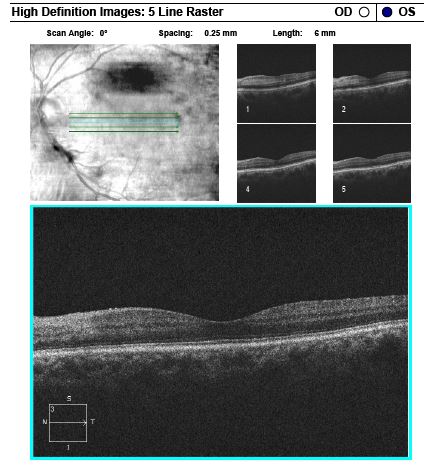 Additionally, the ED evaluation reported that the patient denied any weakness, numbness, fevers, chills, diarrhea, bleeding, nausea, vomiting, sensation changes, syncope or confusion. MRA showed no occlusions, high grade areas of stenosis or aneurysmal dilations of major intracranial anterior and posterior circulation. More importantly it was noted that the unruptured cerebral aneurysm was stable to the 2017 study. MRV had no filling defects to suggest venous occlusion.

On the other hand, carotid duplex was performed, and stenotic range of approximately 50% to 69% was found for the right eye and less than 50% for the left eye. ESR and CRP were normal on blood work. The ED physician recommended the patient follow up with his PCP and neurologist to complete the rest of testing. 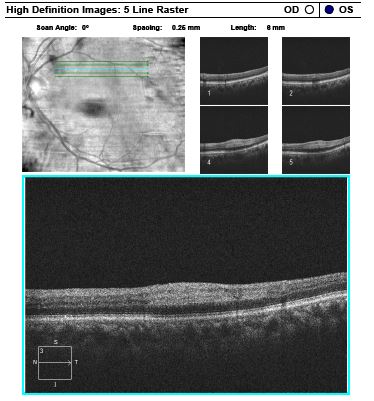 Retinal artery occlusions — whether it is the ophthalmic, the cilioretinal or the branch retinal artery — result in sudden, severe total or partial vision loss. Usually dyschromatopsia, RAPD and often visible retinal infarction (ie, plaque) are manifest. Most commonly it presents with acute, painless monocular vision loss, an ischemic event like a cerebrovascular accident. In the case of this patient there was an acute presence of a “bat shaped” scotoma.

When a BRAO (or central retinal artery occlusion) is suspected, urgent brain imaging, blood work and vascular imaging studies are indicated to detect or rule out ocular and systemic emergencies. Because the retinal pathology results from impaired vascular flow from the cerebral and cardiovascular networks, the primary concerns are stroke and cardiovascular events; prompt recognition by optometrists and evaluation in either an ED or stroke center are of paramount importance – the patient’s history of comorbidity puts him in a high risk category.

In patients older than 50 years, ESR and CRP (to rule out GCA – one should never drop their guard in presence of this difficult elusive emergent pathology nonetheless); MRI (or CT if MRI is unavailable, to detect stroke); carotid doppler (to detect carotid artery stenosis); echocardiogram (for cardiovascular evaluation); and MRA/MRV vascular studies – our patient showed signs of carotid artery stenosis, especially on the left side.

Usually, when BRAO occurs visual function is severely and somewhat irreversibly affected. However, the presence of a cilioretinal artery can anatomically mitigate the vision loss. The question remains if the corollary is true: How seriously or deeply is the vision affected by the occlusion of the cilioretinal artery?

We are inclined to assume that the presumed occlusion of the cilioretinal artery might not have been too severe. In this patient, an inferior paracentral relative scotoma was present with a few days duration and without frank scotoma, just blurring of vision. Here, again, Tamhankar and colleagues pointed to a plaque in the internal carotid artery in cases of BRAO and transient monocular visual loss.

Fluorescein angiography would have had some value, but it was deemed not necessary for diagnosis in this case. Fortunately, the patient remained stable during later visits to the retina service department. Neurology testing was completed with routine follow-up recommendations, as the unruptured cerebral aneurysm remained stable to earlier studies.

The patient will be followed again by optometry. Unfortunately, at the time of this writing, “routine” nonessential follow-up visits are being rescheduled during the COVID-19 pandemic. On the next follow-up soon, he will be educated about signs and symptoms regarding any visual abnormalities. He will be given an Amsler grid to monitor any visual distortion. A 24-2 automated Humphrey visual field will be conducted and analyzed. He will continue to be followed by a primary care physician and as indicated by neurology.

We saw early stages of a BRAO, specifically a cilioretinal artery occlusion. This case illustrates the urgent steps that a retina specialist would take and draws lessons for the primary care optometrist to follow under these circumstances. Because no ocular therapy is proven to be of value for retinal artery occlusion, the eye care professional needs to explore and manage any underlying conditions and make proper urgent or emergent referrals.

Joseph Hallak, OD, PhD, FAAO, is in private practice in Syosset, N.Y. He can be reached at drjhallak@aol.com.

Danielle Kalberer, OD, FAAO, practices at the Northport Veterans Affairs Medical Center and is an adjunct assistant clinical professor at the SUNY College of Optometry. She can be reached at danielle.kalberer@gmail.com.