A 26-year-old white female presented for a comprehensive eye examination. No visual or ocular complaints were reported. The patient described good vision with her current spectacles. She mentioned that previous eye care practitioners told her that she had “macular degeneration” in her right eye.

The patient’s medical history was unremarkable. Family medical and ocular histories were noncontributory. Social history was significant for social alcohol use on occasion. No allergies or surgical history were reported. The patient was not taking any medications and denied use of illicit drugs.

Ocular examination revealed a best-corrected visual acuity of 20/20 in each eye with a low minus refractive error. Extraocular motility was full in both eyes. Pupil testing was normal. Confrontation visual fields were full in each eye. IOPs were 17 mm Hg OD and 16 mm Hg OS.

Anterior segment evaluation via slit lamp examination demonstrated no abnormalities in either eye. 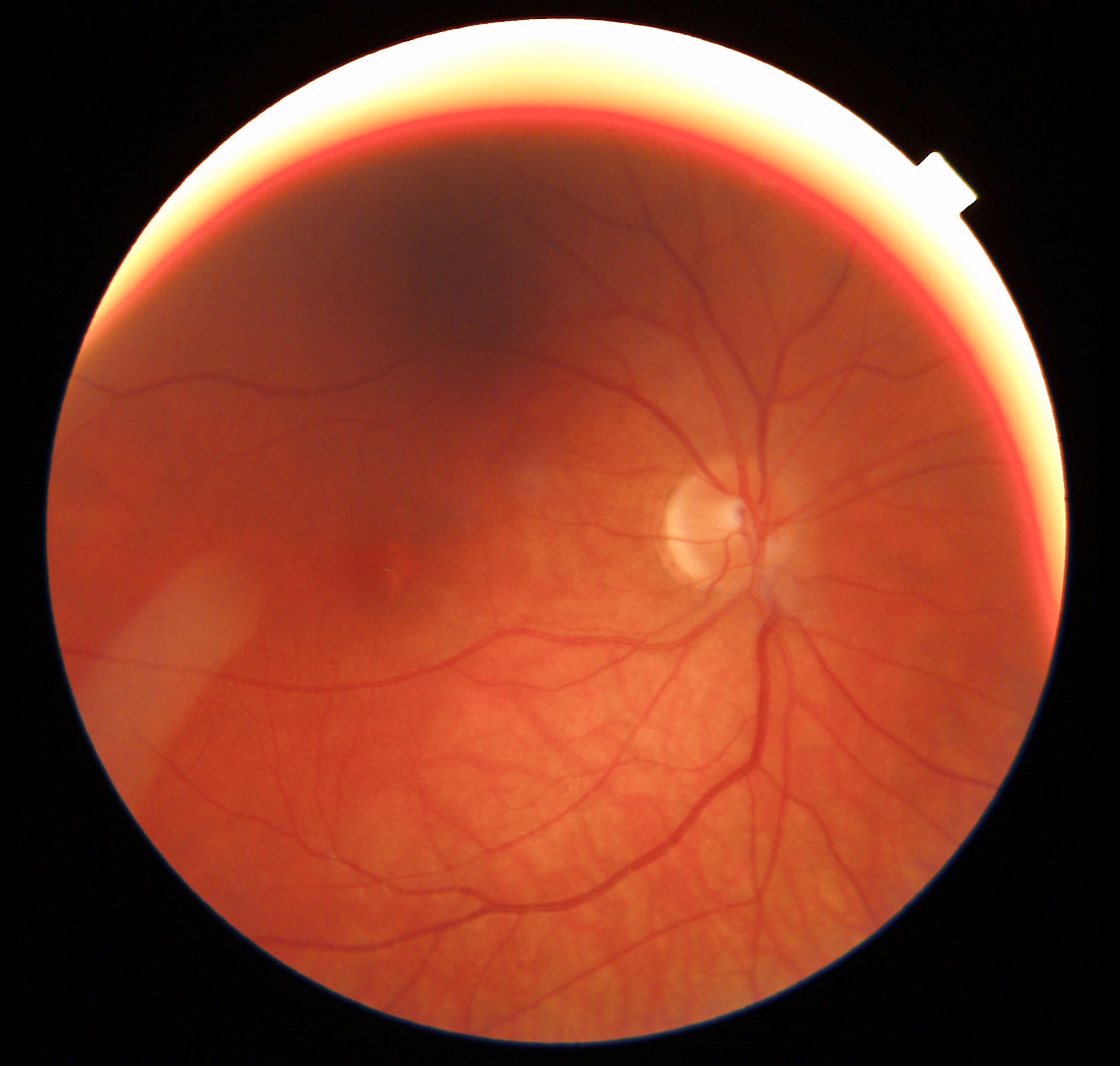 The right eye exhibits a small area of RPE hypopigmentation at the nasal border of the macula.
Source: Christopher Lopez, OD

Spectral-domain OCT (SD-OCT) scans of the macula were obtained to evaluate the lesion. OCT scans revealed an area of choroidal depression. The RPE was intact and followed a reverse curve contour towards the choroid/sclera. The outer retinal layers were present, but faint, and followed the curved path of the RPE/Bruch membrane/choriocapillaris complex. The outer retinal layers include the outer nuclear layer, external limiting membrane (ELM), and the photoreceptor inner segment/outer segment (IS/OS) junction (also referred to as the photoreceptor integrity line or ellipsoid zone). 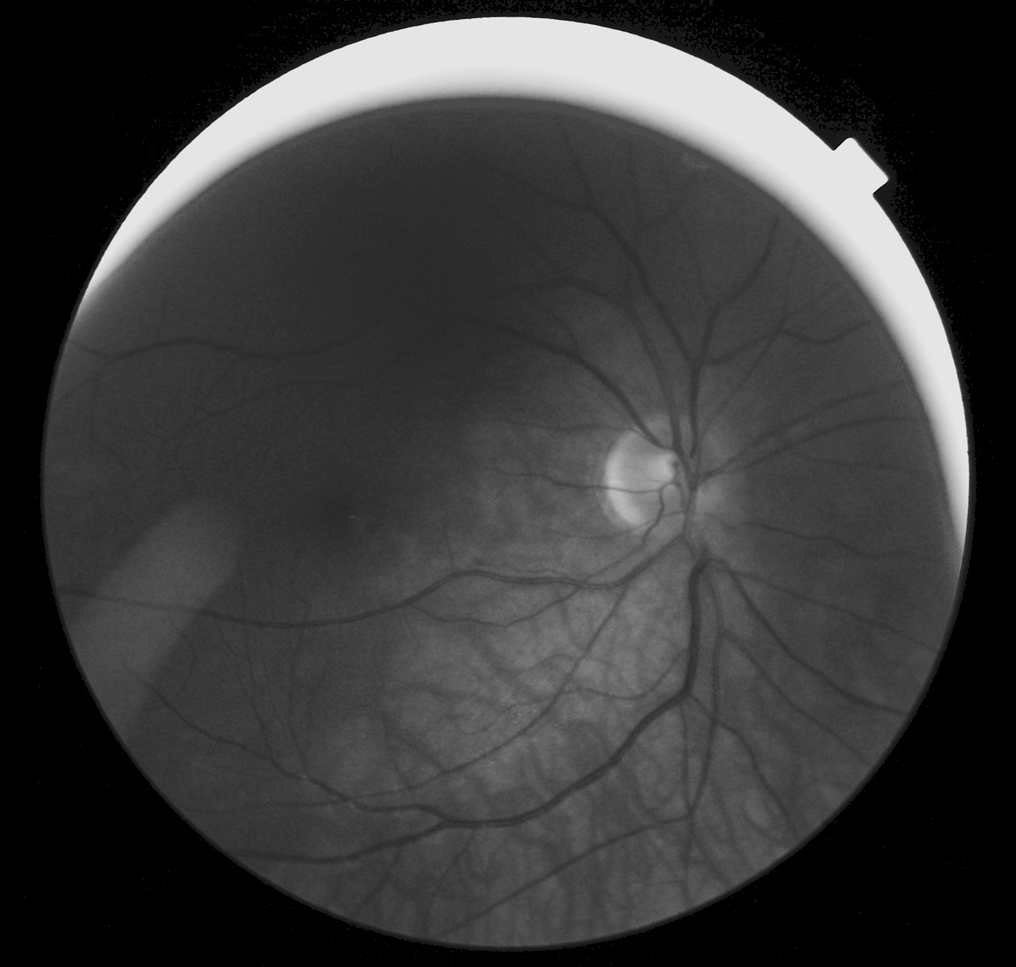 Fundus autofluorescence images demonstrated a focal section of hypofluorescence in the macula of the right eye, corresponding to the choroidal pit.

The unique appearance of the retinal and choroidal layers demonstrated in the OCT scans were consistent with focal choroidal excavation (FCE). Due to the lack of other ocular anomalies, the FCE was determined to be idiopathic.

Because the patient’s vision was good, there was no evidence of a chorioretinal disease, and there are no treatment options available for choroidal excavation, the plan was made to monitor the lesion.

An appointment was scheduled for repeat SD-OCT macula scans in 6 months.

FCE associated with a variety of conditions

FCE is an area of choroidal depression that is distinguished using OCT. The finding was first described in 2006 by Jampol and colleagues, and there has since been a surge in literature regarding the topic. 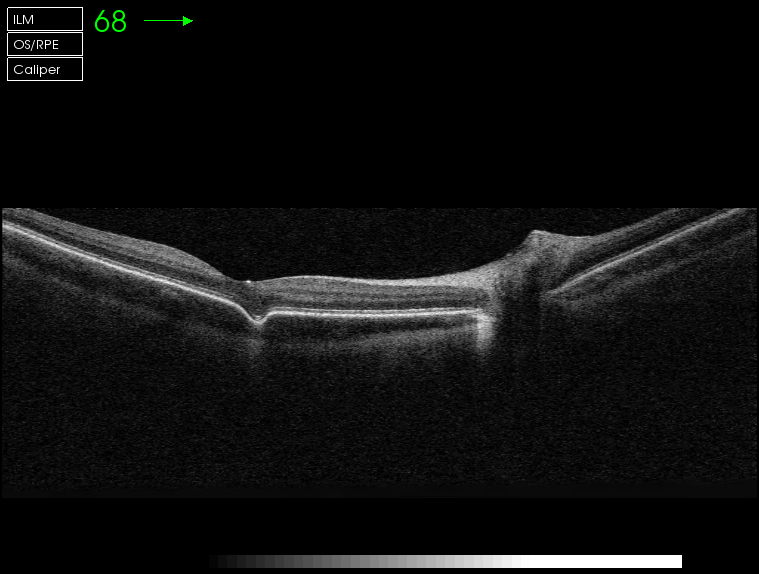 FCE is usually a unilateral finding, but bilateral presentation is not uncommon. Although initially believed to be a congenital disorder, more recent studies propose that FCE may be an acquired feature (Lee et al., Say et al., Park et al. ). FCE appears to show no sex predilection and has more commonly been reported in myopes and those of Asian descent (Liu et al., Kobayashi et al.)) There are no associations of FCE with systemic disease.

Whether FCE is a stable or progressive condition remains to be determined, as the literature contains conflicting reports (Cebeci et al., Xu et al.). Vision tends to remain unaffected but may be impacted if the macula is involved or if FCE presents with the retinal/choroidal conditions listed above.

FCE may be difficult to discern with fundoscopy or retinal imaging, and there is support that fundus imaging is not crucial for diagnosis (Liu et al.). Astute retinal examination may uncover subtle pigmentary changes overlying an area of FCE, often appearing as a section of hypopigmentation. Liu and colleagues reported that FCE typically affects the outer retinal layers, including the outer nuclear layer, external limiting membrane, ellipsoid zone and the RPE. The choroid is also impaired, with focal thinning present in the area of FCE. Interestingly, the sclera in eyes with FCE show no anatomical or physiological changes.

Two subcategories of FCE have been characterized: conforming and nonconforming. Conforming FCE is depicted when the outer retinal layers follow the contours of the choroidal pit; whereas nonconforming FCE occurs when a subretinal space is formed due to separation between the photoreceptors and the RPE (Margolis et al.).

The etiology of FCE remains in question. Many associations between FCE and other retinal/choroidal conditions have been reported, but no consensus exists regarding the pathophysiology. The origin of FCE is thought to be related to a number of possibilities, including ischemia, incomplete chorioretinal differentiation and choriocapillaris dysfunction.

Matsubara and colleagues proposed a mechanism of FCE formation, outlining a cascade of events involving inflammation, pressure gradients and resulting anatomical alterations. It has also been hypothesized that because choroidal scarring may be present in cases of FCE, this fibrotic tissue may pull the retina and choroid outwards, ultimately leading to FCE formation (Shah et al.).

Regardless of the etiology of FCEs, it has been shown that FCEs may compromise the integrity of Bruch membrane. A dysfunctional Bruch membrane/RPE complex may act as a predisposition for chorioretinal pathology with the possibility of vision loss. Therefore, it has been recommended that patients with FCE be routinely examined to evaluate for associated chorioretinal diseases.

FCE is a relatively new chorioretinal finding that can best be characterized using OCT. FCE may have subtle differences in presentation and is associated with a multitude of ocular conditions. An etiology for FCE is yet to be determined, but it may predispose patients to a number of potentially sight-threatening sequelae. Patients with FCE should undergo routine ocular examinations to monitor for potential complications.

Christopher Lopez, OD, practices in a group-OD, multi-office setting in Rhode Island. The majority of his cases consist of complex medical disease, including glaucoma, corneal irregularities and retinal pathology. He can be reached at: christopher.lopez.2013@gmail.com.