A 74-year-old African American man presented for a glaucoma work-up after being identified as a glaucoma suspect due to enlarged cup-to-disc ratios at his annual exam a month prior.

The patient’s ocular history was unremarkable. His medical history was positive for a cerebrovascular accident (CVA) in 1982 that resulted in left hemiparesis. Additionally, he reported a history of hypertension, peripheral vascular disease, an unknown cardiac condition, depression and alcoholism, although he had been sober since 1989. He reported routine visits with a primary care physician and cardiologist.

The patient was unsure of the names of his medications, although he did report compliance with medications for hypertension, depression and his cardiac condition. His most recent blood pressure was 118/64 mm Hg.

The patient’s best-corrected distance visual acuities were 20/20 OD, OS and OU. Pupils were equal round and reactive, without afferent defect. Extraocular motilities and confrontation visual fields were full. IOPs measured by Goldmann applanation tonometry were 23 mm Hg OD and 22 mm Hg OS. Anterior segment was remarkable for age-related cataracts in both eyes.

Posterior segment exam revealed round, pink and distinct optic nerves with 0.65 round cup-to-disc ratios in each eye. Both optic nerves demonstrated nasalization of the blood vessels and the inferior rim appeared thin in the left eye. Ocular health was otherwise unremarkable. Corneal pachymetry revealed central corneal thickness of 459 micrometers in the right eye and 448 micrometers in the left eye. 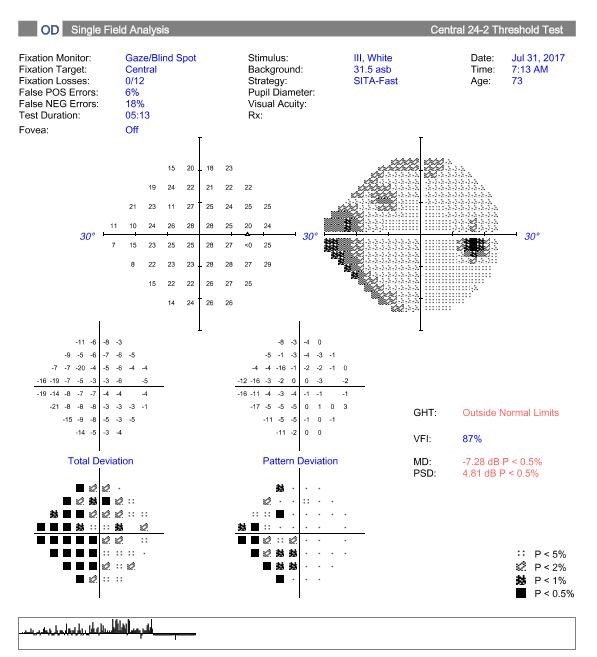 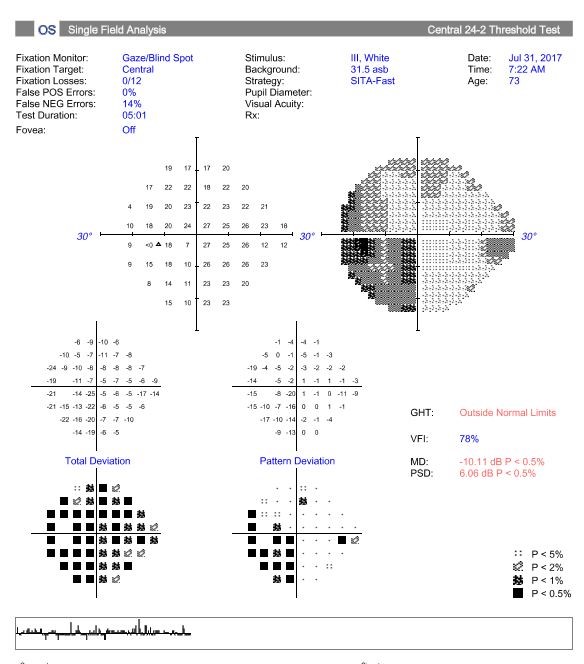 Recall that the optic nerve comprises retinal ganglion cell (RGC) axons, with the cell body of these fibers lying in the ganglion cell layer of the retina. These axons extend from the retina to the lateral geniculate nucleus (LGN) and make up the majority of the retinal nerve fiber layer (RNFL), optic nerve, optic chiasm and optic tract. Atrophy of these axons may begin after ischemia, compression, infection or other insult.

OCT is a useful way to image and measure atrophy of the RNFL and the RGCs. OCT of both peripapillary RNFL and macular ganglion cells have been shown to demonstrate progressive atrophy after postchiasmal neurological disease (Schwartz et al., Jindahra et al.).

At the optic nerve, axons from both the nasal and temporal field are somewhat intermingled. This intermingling makes distinguishing prechiasmal disease and postchiasmal lesions with peripapillary RNFL imaging more complex. However, at the macula an imaginary vertical line exists that passes through the fovea. Axons of the RGCs that originate nasal to this line decussate and project to the contralateral LGN, while the axons of the RGCs that originate temporal to this line project to the ipsilateral LGN. The clear delineation of nasal and temporal fibers at the macula creates a characteristic pattern of homonymous atrophy in postchiasmal neurological disease if retrograde atrophy has occurred. This can be easily identified via a macular OCT with ganglion cell analysis, as seen in this case. 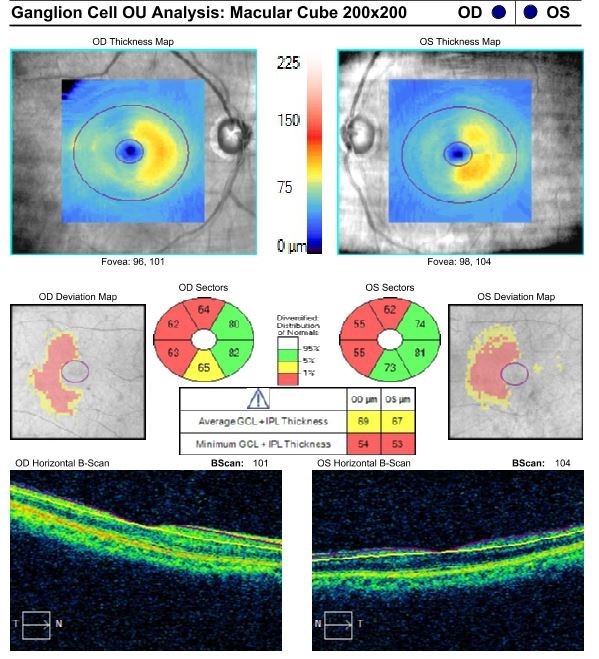 The onset of identifiable atrophy following injury may vary. Direct retrograde atrophy (after lesion of the optic nerve, chiasm or tract) occurs after 6 to 8 weeks. TRD appears to take longer. Jindahra and colleagues demonstrated that TRD began to occur within the first few months, progressed for the first few years, then became stable in later years.

The patient was diagnosed with a homonymous visual field defect secondary to his previous CVA in the 1980s. He was directed to continue care with his primary care physician and cardiologist.

To reduce the risk of future ischemic events it is imperative for the internist to identify and control cardiovascular disease. Low vision rehabilitation may aid patients with visual field deficits or oculomotor dysfunction. As the patient was unaware of the visual field defect, and it was not affecting activities of daily living, vision rehabilitation was not recommended in this case. The patient also continued to be a glaucoma suspect due to thin pachymetry values, elevated IOP, as well as small visual field deficit inferior nasal on the left eye.

He was scheduled to return in 1 month for repeated visual field testing, OCT of the peripapillary RNFL and further consideration of treatment. Unfortunately, the patient was lost to follow-up.

Taylor Keys, OD, is an assistant professor at Southern College of Optometry. She can be reached at: tkeys@sco.edu.