Biography: Rett is chief of optometry for the Greater Boston VA Healthcare system, where he teaches students and residents of optometry.

BLOG: What do we call the photoreceptor lines on OCT?

I did a quick survey and heard lots of terms used to describe the outer retinal lines as seen in OCT images.

If you ask the eye doctor next door you might hear another one. It depends on where you were trained – as does a lot of things in our profession (or medicine in general).

Maybe I was thinking about this because I recently started a 5,000-piece puzzle, which incidentally is not something I would necessarily recommend to anyone (there are just too … many … pieces.) The puzzle is of the famous Bruegel painting of the construction of the Tower of Babel, which depicts Nimrod in the foreground, showing off his famous affront to God in the background.

If you’re not familiar with the Biblical story, it’s the one where Nimrod tries to construct a tower so tall it could reach heaven. This angers God, who “confounds the speech” of all the people working on the tower, thus, they can no longer communicate with each other, and the tower goes unfinished. It’s an origin story about how the humans of earth speak so many different languages.

So why did the OCT, specifically the photoreceptor lines, become the Tower of Babel of eye care? The answer is complicated, but interesting, and requires a little history.

The first OCT image of the retina was taken in 1991, and it was so slow that to achieve usable images they used autopsied eyes (Huang et al.). You should Google the pictures in my first reference, it looks like the thermal vision from Predator. The first OCT did a decent job identifying the nerve fiber layer, but everything in the posterior retina was dark and shadowed.

As technology improved, it was able to be performed in vivo and with better resolution of the posterior retina. The retinal pigment epithelium (RPE) and choriocapillaris came into view as one hyper-reflective line and was named the “outer retinal choroidal complex” (Staurenghi et al.).

In the 21st century things improved to “ultrahigh resolution OCT” as spectral domain technology came to the forefront and the posterior retina was analyzed like never before. 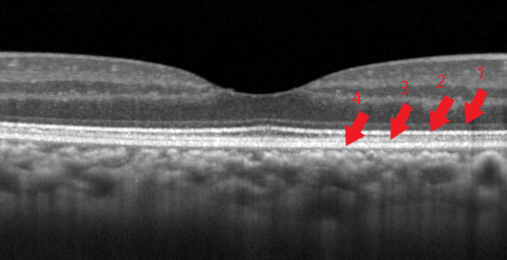 In 2003 Gloesmann and colleagues published OCTs of pig retinas using this technology and found the highly reflective outer retinal structures to co-localize with the ELM, inner segments of the posterior retinas, outer segments of the posterior retinas and RPE of anatomic models. The space or boundary between the inner and outer segments was seen to reflect little or no light. This last statement might run counter to what we think of when some of us refer to the IS/OS junction.

What followed brought about the Babel-like confusion we know today. Several studies corroborated this finding of low reflectivity between the IS and OS, but almost all the studies published the labeled OCTs in negative representation. This is a key point and important to understand. In a negative image OCT, stronger reflections are viewed as darker images. Nowadays we primarily view OCTs in positive representation (the figure in this article shows a positive representation), where stronger reflections are viewed as brighter images.

For example, in a positive OCT the vitreous is very dark, but the RPE is quite bright. According to multiple sources, not long after Gloesmann published his data, different authors presented their findings in a positive OCT but mistakenly “transposed the histologically confirmed labels from the negative image to the positive image” (Spaide et al., Drexler et al.). Said another way, the space between the inner segments and outer segments was bright on the negative OCT (because it was nonreflective), and when someone was labeling the positive OCT, they saw the bright line of inner segments of the photoreceptors and mislabeled it the IS/OS junction.

Shortly after this mistake, spectral domain OCTs became available to the public. People researched the previous papers to determine what to call these never-before-seen posterior retinal structures, and everyone started calling the bright band in the outer retina the boundary between the IS and OS, despite the fact that these same papers showed that the structure did not reflect light. As Spaide writes (in a short paper that is well worth the read), “thus, the idea that the boundary between the IS and OS is a bright band is a mistake because of a labeling error.”

As a quick aside, and perhaps in defense of this one poor labeler, switching between negative and positive OCTs used to be done more often when paper charts were commonplace. Many doctors like to view the OCT in a positive representation, but when we would try to print out a positive OCT, all the black from the vitreous would completely waste printer ink. So we used to view it on the screen in positive representation and switch to negative to print it.

But what should we do now? In 2014 an international panel of retinal specialists met to, “develop a consensus nomenclature for the classification of retinal and choroidal layers and bands visible on SD-OCT” (Staurenghi et al.). See the figure for details. It’s a very interesting read, because some structures were agreed upon easily and others had disagreement. Conversations about OCT structures can get pretty convoluted, mostly because of the point-spread function, which (I will not get too deep here) essentially says that OCT technology tends to artificially increase the width of hyper-reflective bands.

To summarize the findings for the point of this article, the panel decided to call band 2 the ellipsoid zone. It is hyper-reflective and localizes to the ellipsoid component of photoreceptors, which are packed with mitochondria and could be quite reflective. The panel decided to call band 3 the interdigitation zone because it has, “a thickness greater than would be suggested by just the outer segment tips and may represent the interdigitation of the apical processes of the RPE with the cone outer segments.”

So there you have it: 5 years ago an expert panel met and told us of our error and gave us the answer to our question. And still we persist in calling these structures the label that we were taught when we first learned of their existence. Spaide wrote: “No one questioned the rationale or the science behind the naming convention. Thousands of clinical papers published over the years using this terminology all have a basic inherent error.”

It’s a reminder that as doctors (and maybe as humans) we need to question more.