Biography: Rett is chief of optometry for the Greater Boston VA Healthcare system, where he teaches students and residents of optometry.

BLOG: If my patient has a hemianopia, will there be OCT changes?

Most of us have seen patients with visual field changes from stroke, and we confirm a homonymous hemianopia (HH, or hemianopsia, if you prefer; as far as I can tell they’re synonyms) with automated visual field testing. But could we also confirm it with optical coherence tomography findings?

We know that certain areas of the optic radiations in the cortex are damaged, but do the corresponding retinal ganglion cell (RGC) fibers show thinning?

For years the answer was no. The reasons given were: no evidence of this was seen on fundoscopy or optic nerve evaluation and the nerve degeneration would have to cross over a synapse.

The phenomenon is called trans-synaptic degeneration (TSD), and is the topic we’ll explore this month.

Retrograde (or descending) degeneration occurs in the opposite direction – in the proximal segment of the axon that remains in contact with the cell body – and takes much longer. In the case of the optic nerve, it takes about 6 to 8 weeks for the RGCs to become unviable. Trans-synaptic degeneration is when a neuron on one side of a synapse degenerates as a consequence of the loss of a neuron on the other side.

There were case reports of soldiers sustaining occipital lobe injuries and the developing optic atrophy 3.5 years later, but explanations for the atrophy such as papilledema could not be ruled out. There have been cases of retinal changes in certain cerebral infarctions, but recall that one of the first branches of the middle cerebral artery (MCA) branches is the ophthalmic artery, so an MCA infarction could theoretically cause ocular changes via ischemia, and not necessarily RTSD. It’s also important to rule out the fact that the cause of a visual field defect could be due to damage to the optic tract, not necessarily the radiations, in which case, changes in the eye could simply represent retrograde degeneration. The exact location of the brain injury is important to determine if the degeneration is simply retrograde or truly RTSD. 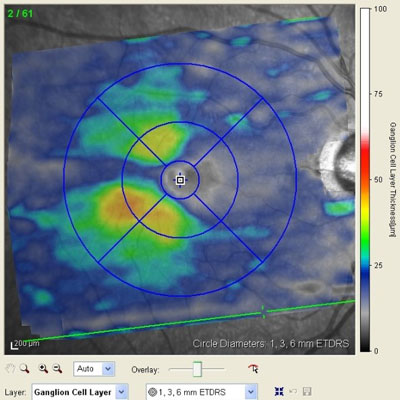 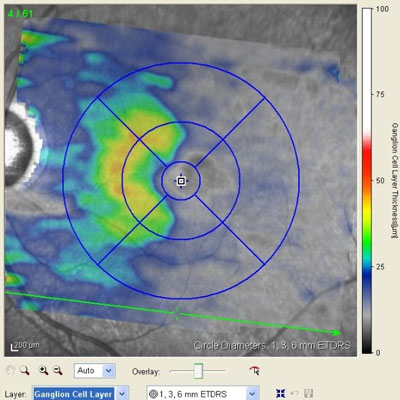 A likely case of RTSD. This SD-OCT shows the GCL thickness in a 63-year-old patient with a history of right HH due to left occipital and temporal lobe damage from a motor vehicle accident 20 years prior to the OCT.

The first proof of RTSD in the visual system was made in the 21st century with the advent of OCT, when patients with unilateral occipital infarcts (without optic tract involvement, verified by a neuroradiologist) showed retinal nerve fiber layer (RNFL) thinning in the corresponding areas. Later, with the advent of spectral domain OCT, the layers of the retina were able to be segmented out, and the thickness of the ganglion cell layer (GCL) was also found to be significantly atrophied in RTSD. In fact, most studies have shown that the GCL is more sensitive to RTSD than is the RNFL, but the reasons are unclear.

One of the more frequently quoted studies looked at 11 patients with quadrantopias due to occipital cortical disease of varying etiologies. They found that 20 out of 22 eyes showed significant GCL thinning, but RNFL thinning was observed in only 15 out of 22 eyes. The time course of RTSD is variable over the literature but is generally thought to show a logarithmic pattern of relatively fast atrophy (some say 4.4 um/year) within the first 2 years, and then a slow rate after that.

So, what does this mean for our management of these patients? In every study, there was always at least one patient with occipital lobe damage and visual field loss without RTSD (at least observable by OCT), and the reasons why there isn’t 100% association are unclear. But some postulate that patients with less (or no) RTSD have a better opportunity for some visual field recovery, which might provide a real-life clinical use for serial SD-OCT in HH patients. Perhaps these patients have a milder defect and a greater cortical plasticity.